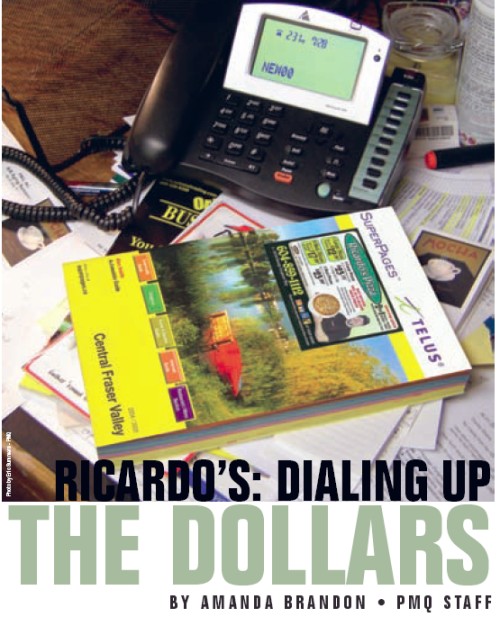 Richard Siemens is proving that an independent can play with the big boys in the Vancouver suburb of Abbotsford. He started his Ricardo's pizzeria just seven years ago. Since 1998, he's built quite a name for himself and even opened a second restaurant.

Richard got started in the pizza business in the 1980s when he and his brother bought a large pizza chain franchise store. They learned the business, and Richard sold the store a few years later when he decided to branch out on his own. After owning a couple of small independent stores, Richard decided to take what he had learned and make more of a go at it.

"Ricardo has been my nickname for a long time, so I thought it seemed like a good name for a pizza restaurant," Richard says. They have a few seats in the front, but the business is fairly evenly divided between takeout and delivery.

Richard likes to give his customers lots of choices in his menu offerings, but most of the sales are pizzas. Customers can choose to create their own pizza by the topping, or they can select one of his 13 specialty pizzas. Richard says that he advertises his create-your-own much more than the specialty pizzas, "because it gets them in the door." Once he does that customers have tried his pizzas and are more likely to try a specialty on a future order. The specialty list includes a taco pizza, a BBQ chicken pizza, and a Perogie pizza. The Perogie pizza has sour cream, potatoes, bacon, farmer's sausage, and cheddar cheese. "This one appeals to people who are curious about the interesting toppings," he says. 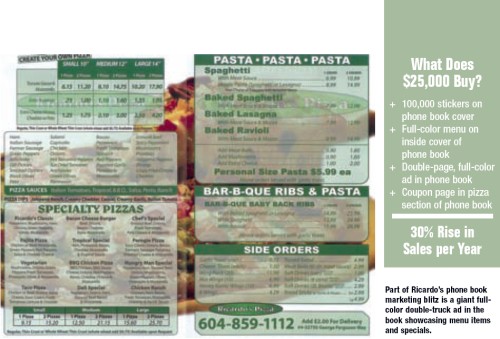 Extensive advertising is how Richard gets his name in his customers' minds. Probably the biggest impact ad he does is a sticker on the front of the local Yellow Pages phone book. For $10,000 paid over 12 months, the phone company designs the sticker, prints it and distributes the books to 100,000 people. Just like his menu, Richard likes to give his customers lots of options in his promotions. On this sticker, which he says is meant to stay on the phone book; he has six specials including a large pizza with up to three toppings for $12.99 and two large pizzas, a lasagna or baked spaghetti and garlic toast for $23.75. He says this special is really popular.

With the sticker the customer is just asked to mention the pricing when they order. "The result has been phenomenal," Richard says. "Everyone in my area that gets a phone book will see me whether they like it or not. They don't have to look for me. I'm the only pizza place on the cover. The book goes out in January, and my sales have gone up around 30 percent each year since I've done the phone book advertising."

Richard doesn't stop there with his phone book advertising. He also runs a full-color menu inside the cover of the phone book and a double-page, full-color menu with a coupon page between in the pizza section of the Yellow Pages. He says that for $15,000 paid over one year, he gets the two ads plus coupon page.

Spending so much of an ad budget on one advertising medium is not always a good idea, but Richard says he's glad he did it, even though it was "the hardest advertising decision he's ever had to make." "When the Yellow Pages guy approached me about the ad, I had to make a $10,000 decision on the spot. I tossed and turned in bed at night, but I had to do something because my business was suffering. It paid for itself in the first couple months. Now, it's the centerpiece of my marketing."

In addition to the phone book advertising, Richard runs specials in a local coupon books, a local apartment coupon book and direct mails specials on a regular basis, and he includes coupons on his box toppers. He tracks several offers through his POS system. Many of his offers such as the phone book sticker are hard to track, he says. So, he is able to track the customer's spending over a 12-month period using his POS.

Richard says he wants to keep his advertising broad, so he doesn't run single menu items on the coupons and specials he advertises. "I don't like to advertise anything specific because I'd have to pound away at it with a lot of money in a short period of time to pump one thing," Richard says. "With my advertising, I try to appeal to a broad amount of people because it may be for something like the Yellow Pages for 12 months, so I don't want to just put one thing on there. I want to promote everything I do."

That doesn't mean that Richard doesn't push new menu items. He just does it on a smaller scale. He recently added a Thai chicken pizza to his menu. He decided to put it on the menu after testing it with loyal customers, employees and friends. "Employees are a great test market because they are young," Richard says. "I will advertise the new item by putting new menus and coupons on my pizza boxes. It may take the next order or the one after before my customers will try something new. It may be six months before I know it's a success."

In order to keep up with menu changes, Richard reprints his menus a couple times a year. He uses a local printer to print full-color menus in runs of about 20,000. He also makes new menu boards when he makes permanent changes to his menu.

Not only does Richard use new pizzas to get his customers coming back regularly, but he also gives them an option the chains don't offer-pastas and ribs. "Ribs and pastas are good options for independents because the big guys don't go that route," Richard says. "It adds something more to your menu that draws the customers to your store. The franchisees don't go into the pastas too much. I guess it's too complicated for uniformity reasons. For independents, it's a good way to go."

They prep and bake the ribs in the restaurant. He receives them frozen and uncooked. He bakes them at 500 degrees for about 10 minutes. "Let's just say it's not just the baking that makes them popular," he says of the rest of the preparation process for ribs. "They require more labor and about a 10 percent higher food cost than the other menu items, which run in the 40 percent cost range, but they are very popular," Richard says.

Pizza By the Slice 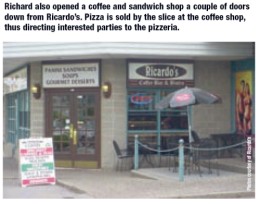 Another way Richard gets people trying his food is through a coffee and sandwich shop he opened a couple doors down from the pizzeria. In this store, he sells pizza by the slice. He makes the pizzas in his pizzeria and keeps them fresh in a warmer made just for slices. He keeps the offerings limited to pepperoni, ham and pineapple, vegetarian, and a couple other basic toppings. Each slice sells for 99 cents. Richard says he sells about a dozen pies worth of slices per day in that shop.

Richard says that his advertising is what draws people into his pizzeria, but it's not the most important thing. "The advertising is really important but it doesn't do anything for you unless you can back it up," he says. "I have to give good service, be friendly and have to put out a really good, consistent product. I spend way too much money advertising just to get them in once. If you get people to come and try you, they'll come back."