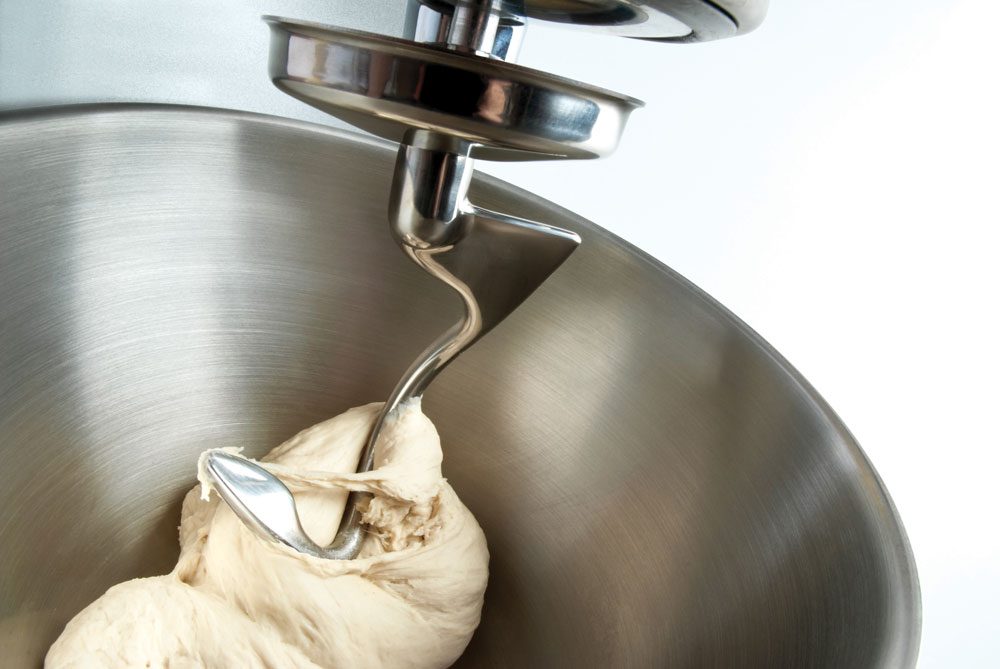 I tried making my pizza dough using malt syrup rather than the usual white sugar but, over time, my dough became very sticky. Is there a solution?

You are most likely using a diastatic malt syrup, which is enzyme-active and is nothing more than a malt-flavored sugar syrup. The diastatic malt syrup contains amylase enzymes, which hydrate a portion of the starch into sugar, and that’s responsible for the stickiness you’re experiencing. Check the product label to see if it mentions anything about being diastatic or enzyme-active. If so, replace it with a nondiastatic/non-enzyme-active malt syrup.

I see that some operators add the flour first to the mixing bowl, while others add the water first. Does it really make a difference which is added first?

Yes. When water is added first, you get more consistent hydration of the flour, which reduces mixing time. In tests that I did many years ago, I found that by adding water first, the total dough mixing time was reduced, on average, by a full minute. When we were making doughs with very short mixing times, such as cracker-type doughs, the flour was always more uniformly hydrated when water was added to the bowl first.

I am using a planetary-type mixer, and the dough keeps climbing up on the hook, where it doesn’t get any kneading action at all. What can I do, aside from stopping the mixer to cut the dough off the hook?

This is a common problem with the type of hook that’s referred to, because of its shape, as a J hook. The problem is usually worse when mixing very small or large doughs, or when mixing at low speed. Try reducing the dough size by about 25%, and mix the dough at medium speed if possible. In the case of small dough sizes, the dough just wraps onto the hook and rides around the bowl, with the hook getting little or no mixing action. In this case, you will need to increase the dough size and again mix at medium speed. You might also try oiling the top 1/3 of the dough hook. If these tactics fail to address the problem, your only option will be to see if you can buy a reverse spiral dough arm for your mixer. With this, you can mix any reasonably sized dough, and the mixing action will be more efficient, resulting in shorter mixing times, as well as improved consistency between doughs.

I attended one of your presentations some time ago, and I remember you saying that all-purpose flour should not be used for pizzerias. Why is that?

I’m not against using all-purpose flour, but it tends to be quite variable between different manufacturers. Therefore, it’s difficult to say with certainty how any one brand will perform when making pizzas. I like to look at hotel and restaurant flours as the lower end of the strength spectrum and work up from there. Those flours are generally equal between different manufacturers, just as their bread and high-gluten flours are consistent. This means that you have the ability to change brands, knowing that there won’t be any huge surprises in store for you.

We have been experimenting with making cracker-type doughs and are seeing a lot of inconsistencies between them. Is this common with cracker doughs, which are low-absorption with a short mixing time?

No, it is not common. If you are using instant dry yeast (IDY) in the dough formulation, this might be where the inconsistency is coming from. While IDY is a great product, it does need to be used correctly. In a cracker-type dough with less than 50% absorption and only about two minutes of total mixing time, this would not be the best of conditions to add the IDY in its dry form. Instead, try putting the IDY into a small amount of 95˚ to 100˚F water, stirring to achieve a complete suspension of the yeast. Pour the yeast suspension into the cold water in the mixing bowl. By doing this, you will see more consistent results between the dough—and possibly a better finished crust, too.

I’ve heard and read that spiral mixers work really well for mixing pizza dough. What is your opinion?

I really like them for mixing pizza dough. They’re strong mixers, nearly bulletproof in all aspects of longevity and operation, and they will effectively mix a wide range of different dough sizes with ease. However, there are some issues with spiral mixers. They’re dedicated dough mixers, and few have an attachment hub, so they can’t do double duty—for example, mixing sauce or powering an attachment for slicing, dicing or shredding. Some have a removable bowl, which is a nice feature to have, as is a plastic drain plug in the bowl. (If I had my way, every spiral mixer would have a removable plastic drain plug in the bottom of the bowl to facilitate cleaning. Without one, you will need to bail the water out of the bowl as if you were in a sinking rowboat.)

Then there is the issue of speeds. Some spiral mixers have only one speed, while others have two speeds, and some even have a reverse speed. I’d opt for a two-speed model, but if that wasn’t an option, I would be just as happy with a single-speed machine. Finally, if you’re thinking of upgrading to a spiral mixer, consider keeping your old mixer for light-duty “retirement” chores, like mixing your sauce and powering your attachment. Then you’ll have the best of both worlds!