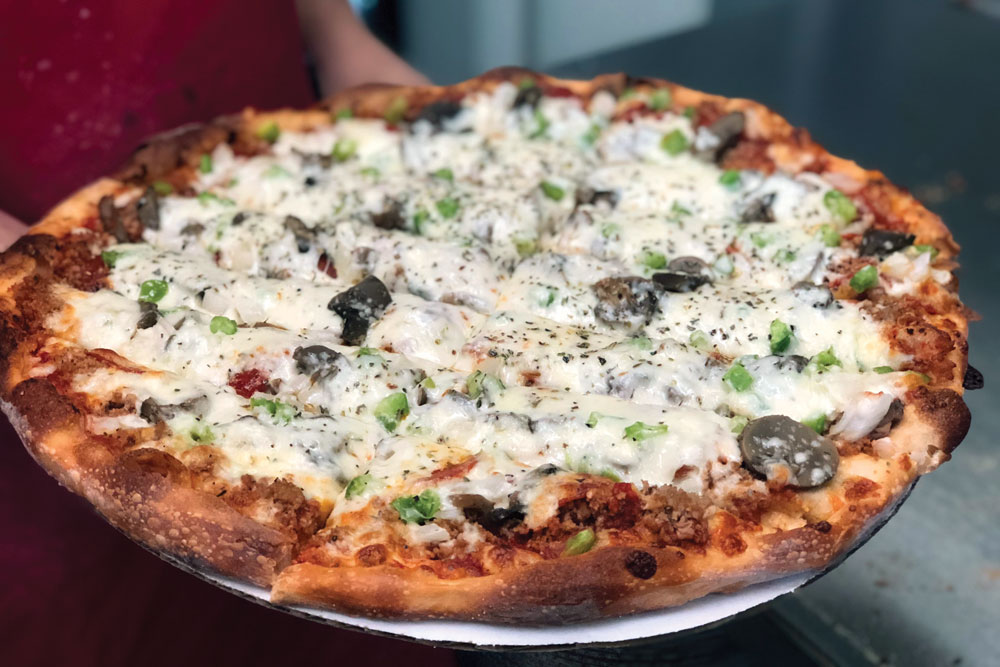 You don’t see it too often, but sometimes a pizza style from a specific region will start to transform into a new creation. As new pizzeria owners enter the scene, new toppings pop up, healthier recipe tweaks and specialties may take hold, and chefs even rethink their ways of cutting the pizza (in the case of some Quad Cities pizzas, going from strip cut to triangle).

But let’s not get ahead of ourselves.

Let’s look at what traditional pizza in the Quad Cities looks like—before we discuss how it’s slowly been changing.

You may be wondering where in America the Quad Cities are. They’re a group of five (yes, five) cities running along the Mississippi River, including Rock Island, Moline and East Moline in northwestern Illinois, and Davenport and Bettendorf in southeastern Iowa. According to Jessica Waytenick, marketing and public relations manager for the Quad Cities Convention & Visitors Bureau, people toyed with the idea of changing the name to Quin Cities when Bettendorf was added, but the name never stuck.

And, unlike more popular New York and Neapolitan styles, there’s a good chance you’ve never stumbled across a Quad Cities or QC-style pizza on a menu unless you’re from, or traveled through, the area.

What makes the Quad Cities style stand out? Here are just a few of the style’s unique traits:

“You either love or hate the Quad Cities style,” says Dean Creech, who got his first pizzeria job at 16, working at Harris Pizza, one of the early purveyors of Quad Cities-style pie. Creech now owns Uncle Bill’s Pizza in Davenport, Iowa, which he purchased from the original owner in 2002. “If we served someone from New York this pizza, they’d say, ‘What’s this? It’s cut wrong, and the toppings are under the cheese.’ It’s nothing like a New York-style or a Chicago-style pizza. It’s its own thing, and if you love it, you really love it.”

Creech explains that Quad Cities-style pizza features dough made with malt and molasses; toppings that include finely ground, lean sausage; thick sauce with a bit of a bite; and real cheese covering the toppings. “The malt and molasses in the dough adds a bit of sweetness, along with the flavor of the malt,” Creech says. “It also gives the crust a good crunch and color when you cook it.”

Beyond the sausage and malted dough, the oven is one of the most important ingredients in a pizza from the Quad Cities, according to Creech. A rotating oven, which ensures an even bake in eight minutes without the need for turning, is Creech’s go-to kitchen appliance. “You can get the rotating oven dialed in just right,” he says. “Other ovens don’t cook the pizzas like these do.”

A Pizza With a Past

As is the case with most regional pizzas, there’s a bit of mystery surrounding who first began serving the unique Quad Cities-style pizza. Many who live in the region credit Harris Pizza as being the style’s originator. However, records indicate that while Harris Pizza opened in 1960, Frank’s Pizza opened five years earlier, in 1955.

And, to further complicate the matter, research shows links to a very similar pizza recipe that began 200 miles away, in 1943, in the town of Calumet City, Illinois. Brothers Tony and Frank Maniscalco came to the Quad Cities (specifically, Rock Island, Illinois) from Calumet City, separately, in the early 1950s (according to Tony’s son, Tony Jr., in a newspaper’s letter to the editor in January 2007).

We spoke with Phil Bacino, co-owner (and grandson of the founder) of Original John’s Pizzeria in Calumet City, which opened in 1943, and confirmed that Tony did work at Original John’s.

So we wanted to know: Did the Quad Cities style actually originate in Calumet City?

Bacino told us he has never been to the Quad Cities to taste its pizza, but he did note several similarities between the Quad Cities style and his pizza—or how it would have been when Tony worked at the pizzeria. “We’ve never had any kind of spiciness in our sauce, but we do use a rotating deck oven, and we used to use malt and molasses in the dough, but we don’t anymore,” Bacino says. “We make our own fennel-based sausage, forming it into loaves and cooking it to get the grease out before we grind it into crumbles. We also used scissors to cut the pizza up until the 1990s.”

Tony apparently brought his skills from Calumet City to Rock Island, Illinois, in the early 1950s and took a job making pizzas at The Paddock Club. The gig eventually led to him to open several restaurants, including Tony’s Club Capri in Moline, Tony’s Pic-a-Pizza in Rock Island, and Tony’s Pizzeria in Davenport.

He later sold his business and recipe to Mama Bosso Pizza (a frozen pizza manufacturer) in 1964, and, for the most part, left the pizza business.

But local legend says that Tony taught the original owner of Frank’s Pizza his recipe, and an employee of Tony’s taught those at Harris Pizza.

As with most pizza legends, we’ll probably never know for sure what really happened. What we do know is that the Quad Cities ended up with a very unique style of pizza, and one that is beginning to transform for the modern consumer.

The majority of pizzerias serving Quad City-style pizza throughout the region stick to traditional recipes and serving methods. However, some believe that tradition can use an upgrade every now and then.

The biggest difference between the original techniques and today’s versions is the elimination of cooking shears to cut the pizza. Some traditionalists use the scissors for nostalgic reasons, but most have moved on to knives and rock cutters to slice their pizzas. “Knives are faster and safer than shears in every way,” Creech says. “I’ve taken the tip off my middle finger three times using scissors.”

Kathy Rashid, co-owner of Treehouse Pub & Eatery in Bettendorf, says, “We’re changing Quad City pizza. We wanted to bring in a healthier version of America’s favorite food. We use wholesome toppings, and it’s not gobbed down with cheese, so you can taste all of the authentic ingredients.”

Joe Schilling, owner of Saint Giuseppe’s Heavenly Pizza in East Moline, is bringing a Gen Z approach to the Quad Cities. Schilling took over management of the family pizzeria when he was 18 and his dad, Bobby, went into politics. He avoids the “Quad Cities” term and employs a variety of unique marketing tactics to stand out. Schilling airs daily Facebook Live videos with his staff and has also run specials on the weekend instead of during the week. “Everyone else was running their specials during the week,” Schilling says. “I was able to take business from other pizza places by running my specials on the weekend.”

Schilling is also shaking up tradition by removing “Quad Cities” from his vocabulary. “I think ‘Quad Cities style’ is an old wording; I’d prefer to just call it really good pizza,” he says. “I don’t want to strive to make my pizza like anyone else.”

Whether sticking to tradition or embracing change, the Quad Cities offer a plethora of unique pizzas for those who take the time to explore the region.