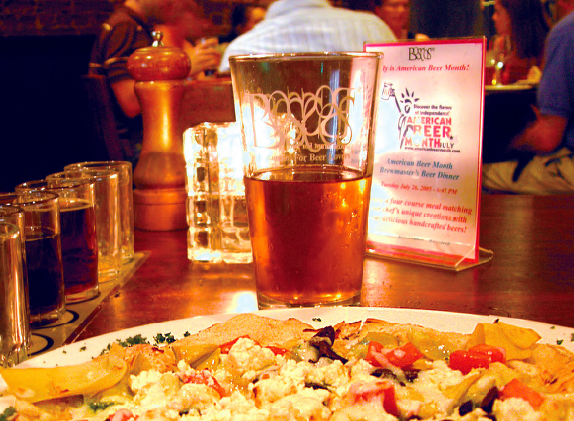 Beer can certainly be called the great American beverage—according to Anheuser-Busch, St. Louis, beer is a $91.6 billion industry and accounts for more than half of alcohol beverage dollar sales. With stats like that, you’re probably wondering how you can get in on the action. Of course, beer and pizza is a classic combination; the casual atmosphere of the typical pizzeria provides a perfect backdrop for beer sales. But if you’re thinking of adding beer to your menu, you probably have some questions.

What types should you choose?

What beer can best complement the food you serve? How can you market beer to new and existing customers? We spoke to industry insiders and pizzeria owners to tackle your most pressing beer questions.

You can easily familiarize yourself and your staff with the basic types of beer to help customers make the most informed decisions when purchasing beer at your pizzeria. Luckily, beer can be separated into two general categories: ale and lager.

Ale is top-fermented (as opposed to bottom-fermented lager) and runs the gamut of taste, from bitter to fruity. Some better-known types of ale include India Pale Ale (IPA), stout, porter, Hefeweisen and Scotch ale. This category also usually includes Belgian ales (which are sometimes considered a separate category), including Lambic beer, a lesser-known distinctive style with a unique taste that is often described as slightly sour and ciderlike in flavor. Other Belgian ales include faro, gueuze, dubbel and tripel.

Lager can be separated into two categories: pale (such as the popular Budweiser, Coors and Miller) and dark. According to Beer Facts, Figures & Fun by Paul Barnett, lagers are mellower than ales and include pilsner, bock, Marzenbier (Oktoberfest), Vienna beer, Dunkel, Kolsch, Rauchbier and American Pale Lagers.

Beers can be categorized in a number of other ways. “Macrobrews” are termed so because of their large batches of beer brewed—for example, Budweiser and Miller would fit in this category. Microbrews and seasonals, on the other hand, are made in smaller batches (these are also called craft beers, some of which are made in larger quantities, such as Samuel Adams seasonal selections). Other specialty beer types—fruit, vegetable and spiced beers—are also gaining in popularity.

Some pizzeria owners maintain a balance between serving micro and macro. “We offer Coors Light and a microbrew on tap,” says Stephen White, owner of Paizano’s Pizza in Baker City, Oregon, “and the domestic outsells the micro three to one. We also offer a wide variety of more than 18 bottled beers. We try to consistently order different beers so that our regulars can try something new.”

Although many customers will stick with popular domestic brands, adding options such as premium imported brands and craft beers can pull in major profits—as long as they sell. “Craft and import beers are doing well, especially with the younger professional crowd (22 to 30 years old),” says Patrick Libonate, on-premise channel marketing manager for national accounts for Heineken, White Plains, New York. “Imported brands give the customer a premium perception, so trading up to imports and crafts can increase your profits.”

Draft, bottled or canned—how do you serve your beer? That depends on your and your customers’ needs. “Draft, if managed properly, will be more profitable,” says Doug Rogers, owner of Johnny B’s Pizza Pad & Watering Hole, with two locations in Charlotte and Gastonia, North Carolina. “But packaged beer is easier to control. It’s really the same as fountain vs. can soda. Offer both types if you can, but that comes with additional cost up-front.”

“Draft beer is extremely profitable, and proper pouring techniques and temperature monitoring ensures a great product every time,” agree Elesa and Shannon Hayden, owners of Johnny Brusco’s New York Style Pizza, with locations in Germantown and Cordova, Tennessee, as well as Olive Branch, Mississippi. “But you do have a certain number of guests who will drink only bottled beer. Specialty or locally brewed beers can be another marketing draw.”

A much more complex option, which some business owners have delved into, is the combination of brewery and pizzeria; these restaurants brew their own beer to complement house-made pizza. Of course, if you’re thinking about this option, you’ll need to conduct in-depth research on brewery equipment and supplies, brewing methods, etc.

A final note about serving: Make sure the beer is cold. “It’s so simple, but often overlooked,” says Libonate. “Hot pizza and cold beer is a great combination. Extra-cold beer programs are worth a look.” On draft, you can serve up your brews in prechilled frosty mugs, while bottles and cans should be kept refrigerated at the proper temperature. Some recent innovations, such as Budweiser’s aluminum bottles, can help beer keep cool even after it leaves the fridge.

Selling beer (or any liquor) brings not only profits, but also additional responsibilities and concerns: Beyond obtaining a liquor license for your restaurant, you’ll have to consider the ages of servers (in most states, employees under 18 years old cannot serve or sell beer; check your state’s regulations), properly monitor and train employees, and make sure that customers are handled—and handle themselves—correctly. Libonate points out that other choices, including everything from hours to lighting to location to music choice, can affect how beer is viewed at your business. Below, owners offer their own suggestions about avoiding the possible pitfalls of selling beer.

“Some of the considerations can include overserving guests, making sure that all servers go through alcohol awareness training, and checking of IDs every time.” —Haydens

“With proper inventory control, there will be an increase of profits. But beer sales also bring on additional headaches: ALE laws, proper training, employee theft, underage drinkers and more. As with any product, there will be give and take. Another possible problem is the language and smoking that is associated with a bar, which we have combated. We are entirely smoke-free, and for the first few months after opening we limited our specials—we did not want to be perceived as a bar, but as a family sit-down pizza restaurant. Our specials are now based around our regular guest base, and we close at 10 p.m. to eliminate the late-night drinkers.” —Rogers

“We’ve added a lock to our walk-in cooler where the beer will be kept, and all managers will be required to do an inventory of the beer at the end of every shift.” —Greg Johnson, who is gearing up to sell beer in his pizzeria, The Pizza Pipeline, Boise, ID

“We have to be aware when someone orders a pitcher of beer, to make sure that we know that everyone at that table is of age before we make the sale at the counter.” —White

“We have a three-beer limit. We also sell six-packs to go.” —Dave Smith, Smith’s Pizza Palace Plus, Emporium, PA

Beer and pizza are a natural combination, as closely associated as peanut butter and jelly, macaroni and cheese, or milk and cookies. So why not encourage your customers to order a beer with a simple promotion? You could increase that table’s profits by a large percentage. “Those who have beer with food tend to be more open to having another slice or a dessert, so you get a bigger ticket, especially if someone orders a second drink,” says Libonate. “Promos such as ‘Buy two beers and get $1 off a third,’ pizza and pitcher promotions, and traditional buy-one-get-one beer deals work well in the pizza environment.”

Some owners find that beer specials can boost attendance on slow nights. American Pie Pizza Company, with 12 locations in Florida, offers a Wednesday night special: 5-cent Bud Light draft beer with any purchase. Vito’s Pizza and Beer in York, Pennsylvania, offers a special to wrap up weeknights: Customers get 99-cent drafts at the bar from 9 p.m. to midnight. Of course, which promotions you decide to run will be based largely on your location, customer base and personal preferences.

An ongoing beer special can also work well to bring in customers. “We always offer beer for a buck and advertise it as such,” says White. “Typically, it’s Pabst Blue Ribbon or Keystone Light in a can. The novelty of getting a beer for a buck brings people in for a couple of slices or a stromboli, so the profit isn’t in the beer sale but in the food sale that goes with it.”

And don’t forget special events! Sports seasons bring together pizza and beer lovers better than perhaps any other occasion, so take advantage. “Beer can increase your sales if you run promotions during sporting events and special times of the year,” say the Haydens. “A lot of times, your local beer distributor will help with advertising for special events (our distributors also create all of our table tents and window signage for free, which is very helpful).”

Selling beer at your pizzeria is a step that can reap great rewards; if you know your customers, effectively train employees and wisely market your beer selection, you’ll find that the great American combination of pizza and beer can be a winner for your business. These complimentary tastes work together to enhance the flavors of both—as Rogers points out, “Just about any cold beer tastes better with a good pizza”—and vice versa!