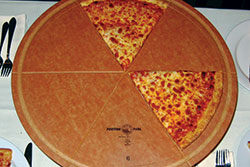 Early on, when Greg owned his own pizza business, he had a problem with his first school pizza lunch program. His staff couldn’t cut pizzas into equal slices. About a month into the program, he received a phone call from the school’s nutritionist. She told him, the students were pushing away the smaller slices for the bigger ones. She told Greg to fix the problem or he would lose the lunch program. So, he did. “I couldn’t find a portioning device on the commercial market that I felt was simple and efficient enough for my employees to use, so I invented it on my own.” It saved his school lunch account. Once word got out that he had a device that could cut pizzas into equal slices, other local schools were buying Greg’s pizzas. He had already established in his community a quality pizza, it was equally important that the slices they served for their school lunch and concession stand accounts were equal too.

Some of Greg’s most notable international orders have come from a distributor on the Island of Malta, a new pizza business in Japan and a café in Romania, part of a growing franchise in Russia.

“I am very fortunate. When I commercialized the Portion PadL, I had my sights on helping other pizzerias in the United States solve their portioning issues for school, concession stand accounts and increasing their profits for their pizza-by-the-slice sales. In 2018, I will place a greater focus on letting the world know there is an easier way to cut their pizzas into equal slices.”

More information about the Portion PadL can be found at www.portionpadl,com or email Greg at greg@portionpadl.com.