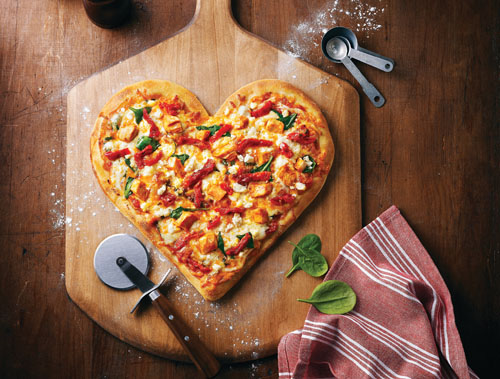 DALLAS (Jan. 23, 2017) – In an effort to provide 300,000 meals for hungry and malnourished kids across the country, Boston’s Restaurant & Sports Bar (Boston’s) will launch its annual Boston’s Cares fundraising campaign on January 23. During the campaign, which runs through February 14, all Boston’s locations will collect proceeds from the sale of Gourmet Pizzas, as well as collect guest donations for the Boston’s Pizza Foundation in support of its national charity partner, No Kid Hungry®.

The annual fundraiser kicks off the Boston’s Pizza Foundation’s efforts to end childhood hunger in America. During the three-week campaign, Boston’s hopes to have raised more than $30,000. For every $1 raised, No Kid Hungry is able to connect a child in need with 10 meals, translating to Boston’s ambitious 300,000 meals goal.  The Boston’s Cares campaign is just the start of the giving that the company does throughout the year. Other initiatives include an annual Golf Tournament among other year-round fundraising events, like the Round Up program, which gives guests the opportunity to round up their checks to the nearest dollar and donate in support of local and national causes. Since its inception in 2003, the Boston’s Pizza Foundation has raised more than $1,700,000 in support of charities across the United States.

“Giving back to those in need is just part of our DNA at Boston’s and our partnership with No Kid Hungry® has made it possible to really make an impact in people’s lives,” said Eric Taylor, President of Boston’s Restaurant & Sports Bar. “Throughout the year we aim to make a real difference and the Boston’s Cares campaign is just the start. We set a goal for this campaign to raise enough to provide 300,000 meals for hungry kids. We are really hoping we can band together with our communities and give back to our neighbors and those in need.”

During the 2017 Boston’s Cares campaign, all 28 Boston’s locations across the country will offer a variety of opportunities for guests to donate:

“At No Kid Hungry we believe that every meal has a story, and the support that the Boston’s Pizza Foundation and all Boston’s restaurants continue to provide tells a story of immense compassion,” said Diana Hovey, Senior Director of Dine Out for No Kid Hungry. “We are proud to have a partner like Boston’s working to make a lasting impact on the lives of America’s children, one meal at a time.”

Boston’s Restaurant & Sports Bar’s U.S. operations are based in Dallas. The company currently has 28 locations operating in 22 states and the company’s sister brand, Boston Pizza which is celebrating more than 50 years of service, has more than 390 locations throughout Canada and is considered the No. 1 casual dining brand in the country.

Boston’s is both a family-friendly casual dining restaurant and an energetic sports bar, all under one roof. For over 50 years, Boston’s has specialized in providing a relaxing atmosphere and fabulous food to parties of all sizes. Boston’s motto is “We’ve gotcha covered,” and with 80+ menu items, primarily made in-house, they deliver on having something for every occasion and taste. For the latest news on Boston’s Restaurant & Sports Bar visitwww.facebook.com/BostonsNational or follow Boston’s on Twitter at @BostonsCorp.

About the Boston’s Pizza Foundation

The Boston’s Pizza Foundation is committed to giving back to the communities in which we operate. Focusing on our youth, the Foundation partners with child-related causes and has raised over $1.7 million for local and national charities since its establishment. Through the strength of our franchisees, vendor partners, and guests, we are able to raise funds year-round, allowing us to focus on ongoing needs within our communities. The Boston’s Pizza Foundation is a Section 501(c)(3) exempt private foundation. For more information, visit http://www.bostons.com/foundation.

About No Kid Hungry

No child should go hungry in America, but nearly 1 in 5 kids will face hunger this year. Using proven, practical solutions, No Kid Hungry is ending childhood hunger today by ensuring that kids start the day with a nutritious breakfast and families learn the skills they need to shop and cook on a budget.  When we all work together, we can make sure kids get the healthy food they need. No Kid Hungry is a campaign of national anti-hunger organization Share Our Strength. Join us at NoKidHungry.org.