I started cooking at the age of nine.  Barely able to see over the counter top, I stood happily alongside my mother as she prepared meals for my father and seven brothers. She took great pride in the traditions of her Italian heritage, but also stressed that the most authentic ingredient in any dish came from the feelings in my heart.  With that in mind, I looked to my Sicilian roots, but also allowed my heartfelt creativity to lead the way.  Although I enjoy cooking all types of foods, I have always had the most fun creating new pizza recipes using…well…less than traditional ingredients. The Loaded Potato Pizza was born four years ago when a friend insisted I must be running out of ideas…not a chance. I knew when I started that similar potato "tarts" have been created by a great many Sicilians before me, however, I know in my heart that the one described below is truly unique to any region of the world. 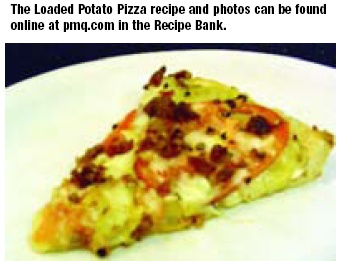 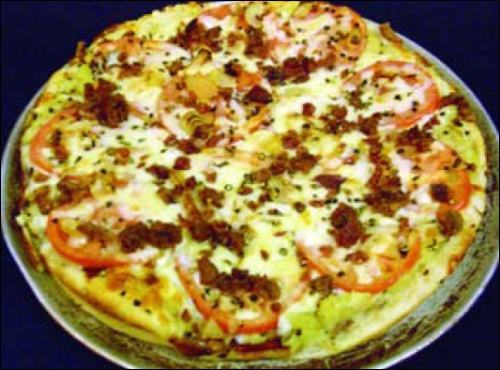 Hi, my name is Theo Kalogeracos, winner of the Caboolture Dairy Farmers Best of the Best Pizza Challenge in Sydney, Australia, in 2003. Tom Boyles asked me to submit my winning recipe as part of the new International Recipes section in PMQ. This pizza first started as just a name, which is after a rock band from Seattle called MUDHONEY. I deconstructed the name into a brownie-type pizza. The recipe that makes the base of this pizza is the "mud" and the "honey" is drizzled over the finished product. This pizza was part of my selection of pizzas made at The New York Pizza Show's Australian Pizza Making Demonstrations. As I mentioned, it also helped me win the Australian title in Sydney at the Caboolture Dairy Farmers Best of the Best in 2003. Enjoy. 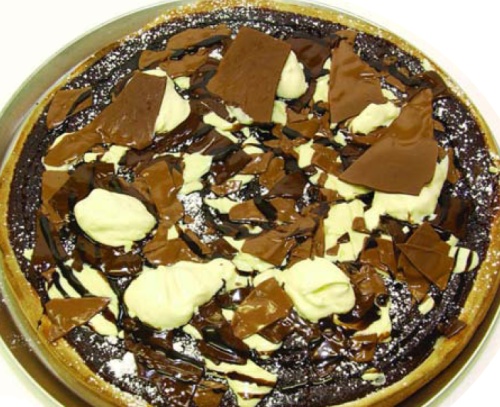 The pineapple has served both as food and symbol throughout the human history of the Americas.  Originally unique to the Western Hemisphere, the fruit was a culinary favourite of the fierce Carib Indians who lived on islands in the sea that still bears their name.

This pizza is designed to accentuate the pineapple and you cannot put too much pineapple on this pizza. This pizza is assembled with the intent of getting specific overwhelming tastes in the different bites. So when you bite where the bacon is, you get a lot of bacon, the pineapple a lot of pineapple. Building a pizza this way gives you a lot of height, which makes for an awesome presentation and value. The flavour profile in this pizza is awesome, the sweet juicy pineapple, the sour, bitter broccoli rabe, the smoky, salty bacon, the hot, spicy chili flakes and garlic, the freshness of the sweet red pepper, the pungent radicchio. The extra virgin olive oil and meat juices with the mixture of all ingredients and along with gooey mozzarella and explosive Stilton. WOW, what a pizza! Thanks Dole.

Procedure: Take your well-risen crust and spread your sauce to 1/2 inch from edge. Next, spread your mozzarella evenly and sporadically spread the Stilton. Next, take your meats and roll them up and push into cheese to hold them up and place evenly around pizza. Then take five to eight pieces of pineapple and place between every piece of meat in a mounded fashion. In the centre of the pizza, make a mound that is three to four times bigger than the other pineapple mounds. This is your centrepiece. Now take the sauteed broccoli rabe and make it into a ball and place in approximately five points on pizza. Spread your red sweet pepper and julienne radicchio evenly. Sprinkle your herbs, chili flakes and extra virgin olive oil when pizza comes out of the oven. Cook for 15 minutes at 500-525. Do not cut pizza until customer has viewed it because it will be difficult to cut and maintain its appearance.  Enjoy! 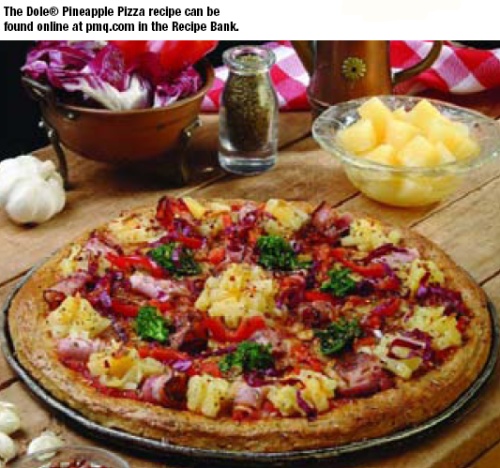