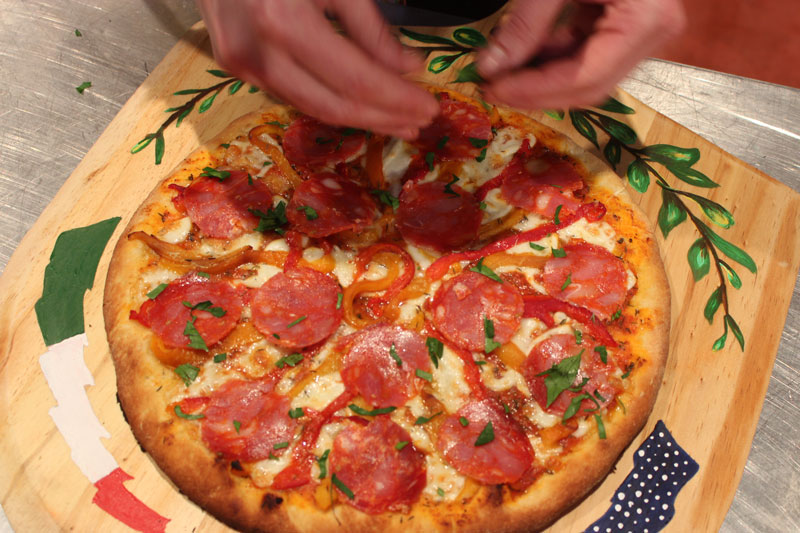 Driving from New York to Boston this summer, PMQ publisher Steve Green remembered an interesting conversation he’d had a few years earlier with a man named Billy Manzo. “He’s a man of taste—literally,” Green says. “He’s a former tobacconist, brewer and now pizzaiolo who, at the time, was building a business called Federal Hill Pizza in an old vaudeville theater in Warren, Rhode Island. After that discussion, I knew I wanted to visit his pizzeria someday, so I turned my thoughts into a Post-It note, which made its way to the PMQ Bucket List map.” Finally seizing his chance, Green headed to Rhode Island during his Northeast journey and interviewed Manzo. “Whenever I visit a pizzeria, I always find something new and interesting, but I learned 10 big things from Billy that we’ll be sharing in the next issue of PMQ.”

While on a trip to Toronto, Ontario, Canada, PMQ’s Liz Barrett spent some time with award-winning pizzaiolo Joe Leroux, who just celebrated 26 years at his Mississauga, Canada-based Amadio’s Pizza. Located in a strip mall and offering only takeout and delivery, Amadio’s ranks as one of the top three pizzerias in the Greater Toronto Area and Mississauga’s best independent pizzeria eight years in a row. Observing the family-run operation in action, Barrett says it was easy to see how Amadio’s stays ahead of the game, with pizzas undergoing strict quality-control measures and technology, such as online ordering and UberEats, being embraced.

Everyone talks about Detroit-style pizza, but until you’ve sat in a red faux leather-lined booth and bitten into the crispy, chewy, cheesy original, it’s hard to put it into words. Barrett stopped into three of the Motor City’s favorite Detroit-style hangouts on a recent trip to Michigan. A visit to the original Buddy’s, which is celebrating 70 years, revealed that they are most certainly not stuck in the past. Buddy’s offers multi-grain and gluten-free crusts and just introduced Buddy’s Brew, its own beer. Shield’s Pizza co-owner Paul Andoni greeted Barrett at Shield’s Troy location. Shield’s is a Pizza Hall of Fame member and was recently featured in Barrett’s Marketing Marvels column in PMQ. And Barrett found out why Loui’s Pizza in Hazel Park has been romancing diners with its cheesy pies and kitschy Italian décor since the 1970s, helping it secure a spot in Detroit’s Top 5.

Pizza makers on the West Coast will get their chance to shine as the U.S. Pizza Team journeys to Las Vegas to host the Western Culinary & Acrobatic Trials at this year’s International Baking Industry Exposition (IBIE). More than 20,000 baking professionals from 100 different countries will converge at the Las Vegas Convention Center for the event, to be held October 8 to 11. This year’s USPT trials will include six categories of competition, including Classico and Gluten-Free on the culinary side and Freestyle Acrobatics, Fastest Pizza Maker, Largest Dough Stretch and Fastest Box Folder. The grand prize for the winner will be a free trip to Parma, Italy, to compete with the USPT in next spring’s World Pizza Championship. The trial event will take place in the PMQ Pizza Village, a unique town-hall-style pavilion on the IBIE show floor featuring pizza-related exhibitors, demonstrations and more. This year’s exposition also features the American Cake Decorating Demo Theater, the Great American Pie Festival and Fresh Take Talks, a series of brief, informative presentations by influential thought leaders about consumer, nutrition and industry trends.

There’s a thriving pizza scene in China, and the U.S. Pizza Team will tap into it during this year’s FHC China, the country’s largest food and beverage industry trade show, November 9 to 11. Although pizza’s still a relatively new food in their country, the Chinese have already begun to develop their own pizza-making style. Small, up-and-coming chains like LaCesar are making inroads, and PMQ China has provided guidance to the newbies struggling for a foothold. FHC China celebrates this growing tradition with the Chinese Pizza Championship, and American pizza makers from the U.S. Pizza Team have been invited to participate in recent years. “China is alive and breathing—there’s a buzz,” USPT captain Michael LaMarca told us during the 2015 competition. “When I first started cutting pizzas as a kid 25 years ago, I never would have guessed I would travel the world, making pizzas at international competitions. But here I am, a small-town Ohio boy, standing in Shanghai!”