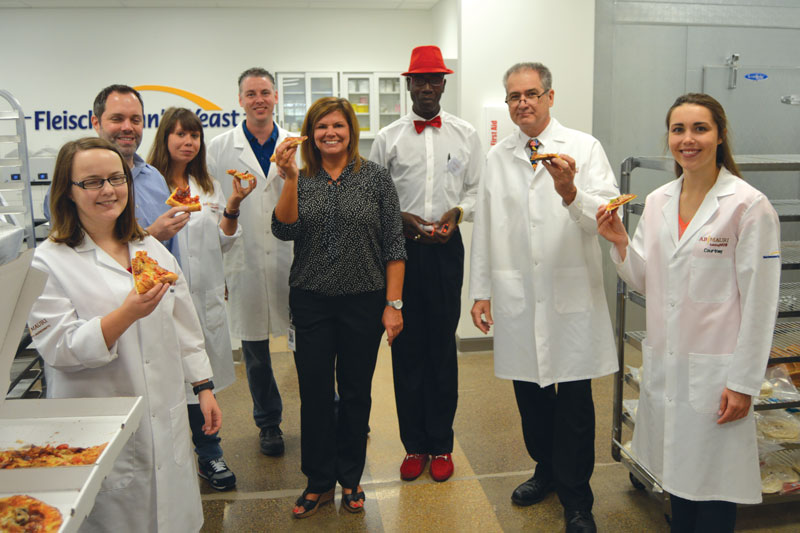 The PizzaTV crew got a crash course in the chemistry of pizza making during a visit to the headquarters of AB Mauri, the company that produces Fleischmann’s Yeast and other food ingredients. This state-of-the-art facility boasts a 5,000-square-foot bakingHUB and pilot fermentation center, with a contingent of baking scientists developing and testing a variety of baked products, including pizza, pan bread, baguettes and more. In addition to Fleischmann’s Yeast, AB Mauri produces dough improvers, leaveners, mold inhibitors, enzyme blends and a number of specialty ingredients under the AB Mauri Bakery Ingredients brand name.

U.S. Pizza Team veteran Dave Sommers, co-owner of the five Mad Mushroom restaurants in Indiana and Kentucky, is known as the consummate pizza man. As a pizzaiolo, he’s dedicated to the craft and competes every year in the culinary category of the World Pizza Championship in Parma, Italy; as a “pizzathlete,” he can fold boxes and prep a pie in a flash. We sent the PizzaTV crew to his West Lafayette store to learn his secrets about marketing and social media and followed him around in the kitchen as well.

Mikey’s has been on our bucket list ever since our editor started reporting on its offbeat marketing antics. It’s the home of irreverently named menu items such as the Cheezus Crust and the One Charming Motherf#$%ing Pig (described as “10 times more charming than Arnold from Green Acres”). It has more than 6,000 followers on Instagram and has been a pizza pioneer on Snapchat, the social media platform aimed at teens and college students. We interviewed the four-store company’s resident marketing maven, Jason Blundo, to learn what makes Mikey’s such a creative force in the Columbus area.

Fans of wood-fired pizza follow Sulla Strada Pizza’s mobile unit all around San Antonio. PMQ publisher Steve Green wants to know what all the fuss is about, so he plans to check it out in an upcoming trip to the Lone Star State. Sulla Strada roams the city in search of hungry pizza fans, but we first spotted it among the numerous food trucks that crowd the space at Alamo Street Eat~Bar, San Antonio’s popular “urban gourmet food truck park” located on (you guessed it) Alamo Street. Other mobile restaurants in the park include Zum Sushi, Attaboy Burgers, Wheelie Gourmet, Where Y’at Third Coast Kitchen and Chef Jason Dady’s DUK Truck.

Forget turkey and dressing. Our editor-in-chief, Rick Hynum, and some friends plan to go prowling for pizza over the Thanksgiving weekend, up and down Magazine Street, into the French Quarter and beyond. He’ll definitely hang out with James “Jammer” Orintas, co-owner of the four-store Theo’s, before sniffing around for more great food from the Bywater to Old Metairie. Got any recommendations? Send Rick an email at editor@pmq.com and let him know where to go, why he should go there and what to order. It doesn’t have to be fancy—in fact, the more down-to-earth, the better—but a kid-friendly environment is a must. And if Rick can’t make it to your restaurant, our marketing director, Anna Zemek, will be traveling to the Big Easy with her family in the coming weeks, too!