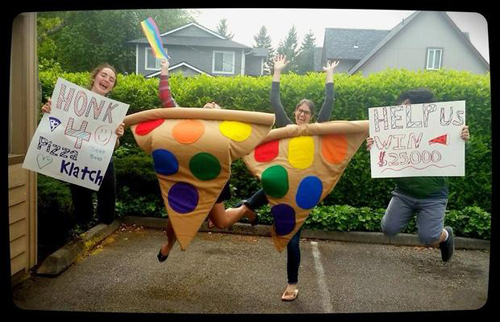 This week's pizza milestones included a mile-long pizza, the world-record holder, weighing in about 5 tons. With The Supreme Court now fully on board with same-sex marriage nationwide, it's a great time to highlight an Olympia, Washington, effort to support LGBT high school kids partly through the healing power of pizza parties. More than fireworks will be spiraling skyward when Oxford, Mississippi, hosts the 2015 Slice of Americana featuring pizza making and acrobatics.

Pizza is popular in all regions of the country and this year's PMQ Western Pizza Summit in Fort Lupton, Colorado, brings together some of the best pizza thinkers from around the nation and Canada. One of those topics under discussion at the Summit will be leveraging point of service technology. A Spanish company called Telefónica is offering an Internet-connected push button device for ordering pizzas, among other uses. Pizza brings communities together in times of tragedy. A Milwaukee-area pizzeria, Pizzeria Piccola, had the back of a detective shot in the line of duty. They sent over a dozen pies for the injured police officer and hospital staff helping him recover.

The City of Angels has a less-than-heavenly reputation for pizza excellence, but the L.A. Pizza Society is a group of pizza fans who are trying to showcase great local pizzerias by hosting all-you-can-eat shindigs at joints like Prufrock. Finally, Pieology is the fast-casual leader that keeps the big chains up at night as they stake their claim as the fastest-growing pizza outfit ihe nation.