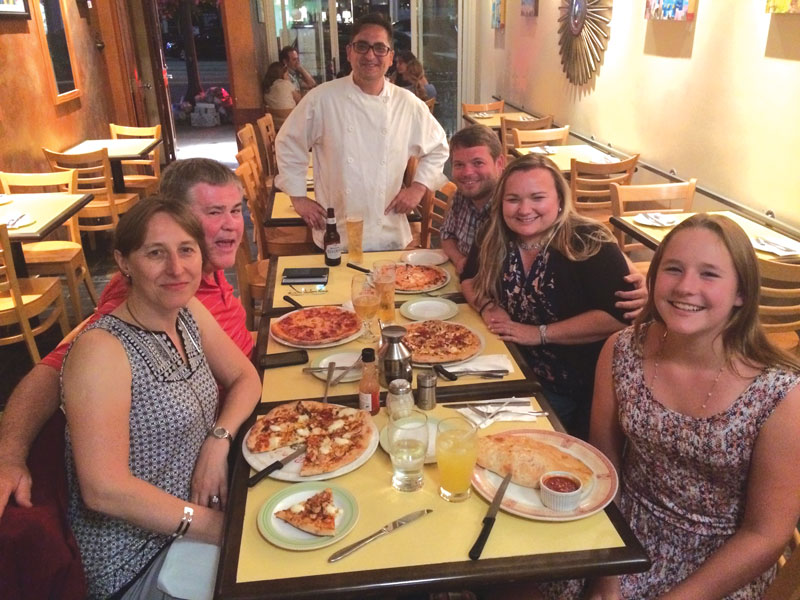 On a trip to Toronto, editor-at-large Liz Barrett and her husband Benjy joined Amadio’s Pizza owner Joe Leroux and his family for dinner at two historic pizzerias. At Toronto’s first pizza shop, Vesuvio Pizzeria & Spaghetti House, they met Ettore Pugliese, who has been working the ovens since he opened the eatery with his father and brother in 1957. The restaurant serves a New York-style pizza that’s not too thick and not too thin, Pugliese says.

At Frank’s Pizza House, which opened in 1965, the group was greeted by owner Giorgio Taverniti, who took over the pizzeria with his mother Maria in 1992. Frank’s is best known for its calzones and specialty pizzas named after family members. Maria passed away in 2016, but Giorgio carries on her legacy by serving some of the city’s favorite pizzas.

When senior copy editor Tracy Morin took a trip home to New Jersey, an all-night pizza party was already in the works. Talulah’s Pizza.Bar.Bread scored a top-five spot on the 2016 “N.J.’s 25 Best Pizzerias” list from one of the state’s pizza authorities, Peter Genovese. But it was the inventive, outside-the-box menu—think flights of mezcal and in-house fermentation—that piqued Morin’s interest. Throw in housemade vegan pepperoni and sausage; artfully crafted sourdough bread loaves; and creative toppings like miso creamed kale and local Black Beauty eggplant, and Talulah’s stamped itself as a must-stop. It also scored extra points for listing Cape May Brewery (co-owned by Morin’s cousin) as one of its long list of local purveyors tacked to the exposed-brick walls, and for imaginative cocktails that incorporate made-from-scratch ingredients such as seasonal jam.

Meanwhile, Porta stands out with Neapolitan certification stamped by the master pizzaiolo Roberto Caporuscio, plus mozzarella and ricotta made in-house daily, and everything from hand-built ovens to flour and tomatoes imported from Italy. A seasonally changing menu ensures the freshest produce possible to top airy, fire-blistered pies, and local hipsters gobble up the myriad vegan options on the menu. Picnic-style tables inside and out (plus a bocce court) wait beyond the welcoming sign that announces, “Eat. Drink. Be Honest.” In keeping with that philosophy, a portion of sales from a rotating pie named after a friend and fan is donated to a local scholarship fund.

PMQ International Correspondent Missy Green is no stranger to Sweden. She visited Malmö in 2013 and went on a pizza tour with chef Michael Arvblom, an international pizza making champion who beat out several industry legends—including Giulio Adriani and Antonio Starita—in an international competition in 2011. Arvblom has asked Green to come back this year as a judge in the Swedish Master Cup Championships in Stockholm. The event is sanctioned by the World Pizza Championship (WPC).

Sweden is so serious about pizza that the country holds three culinary events a year—one in each major region of the country. Regional winners earn a trip to Parma to compete in the WPC. But Swedish pizza will likely never be confused with traditional Italian fare. Missy uncovered some unusual variations on the classic pizza during her Malmö trip, including:

The Pizza Salad. No, it’s not what it sounds like. Green describes it as coleslaw without the creaminess, featuring shredded vegetables and a strong bite of vinegar. “It’s given to the customer immediately after ordering a pizza and always included free of charge,” Green wrote in a 2013 blog about her adventure. “It’s pretty good if you like those vinegary/pickled flavors, plus it’s a very inexpensive ‘happy’ to give to your customers. There’s no fixed recipe, and it doesn’t matter how upscale or downscale the pizza shop is. There will be pizza salad.”

Kebab Pizza. This one is topped with the fixings you would expect to find in a shawarma wrap, including iceberg lettuce and yogurt sauce. “The seemingly strange combo is likely due to the proximity of pizza with kebabs [in Sweden],” Green wrote in her blog. “The two are rarely seen apart. Selling pizza in the same store as kebabs could be why sauces on pizza—such as béarnaise, yogurt, garlic, curry and Thousand Island—are quite popular, too.”

Green reports that most pizzerias in Sweden offer about 50 pizzas on the menu, including pies topped with banana and shredded ham, smoked salmon and tuna, or thick-cut steak and a buttery sauce.