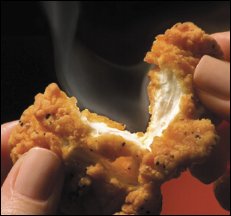 By now everyone is aware of the recent launch of chicken products by some of the major pizza chains. Domino's is offering Buffalo Chicken Kickers, Papa John's is offering Papa's Chicken strips and both are backing up these new menu offerings with massive promotions.

Customers are being bombarded with direct mail campaigns, television ads, newsprint advertising, radio spots and other mediums. Nation's Restaurant News (NRN) earlier this year ran an article about strategies some of larger chains would be employing to boost sales (read a review of this online at www.pmqnews.com/pizza_chains_new_products.htm).

Traditionally, many of the 'Big Boys' attempt to lure customers in with heavily discounted products, which has had some negative results on the industry. In the NRN report, Amy Zuber wrote that the major chains would attempt to boost sales through new menu offers and that seems to be the case. Papa John's offered Spinach and Alfredo and Six Cheese pizzas earlier this year and now offers their chicken strips. Domino's has offered Cheesy Bread, CinnaStix and a new Kickers, which will become a permanent fixture on their menu. Pizza Hut offered the P'Zone and is now promoting a Chicago-style deep dish, but chicken appears to be the thing right now. So how can this affect the smaller chains and independents?

Independents can benefit from the massive promotions the big chains are running. With all of the advertising, customers are starting to think outside of the pizza box when it comes time to order. Already customers have come to expect pizzerias to offer wings. It's almost like having to offer fries on the menu if you sell burgers. The major chains have done a lot of the legwork and indies and smaller chains should capitalize on it. Chicken items can not only create great bundled items, which can increase average ticket orders, they offer another reason to dine at a pizzeria. Not everyone wants to eat pizza, nor do they want to eat it everyday. Different items on the menu gives them another reason to order from a pizzeria more than once a week and satisfy that family member who doesn't want pizza when everybody else does. The heavy promotions of chicken products have customers trained like Pavlov's dogs to think about side orders of chicken when they order pizza. So how can you be a little different?

Papa's Chicken strips are made from tenderloin cuts from the breast and served as strips with sauce. Domino's uses all-white meat chicken in a nugget form served with two types of sauce. There are some other options. Robert Ilvento, founder and CEO of Cluck-U-Chicken Branding in Princeton, New Jersey, opened Cluck-U restaurant in 1985. "I always ate pizza, but one day my brother introduced me to Buffalo wings," Robert said. "When I opened my restaurant, people would come in an comment that they didn't even know a buffalo had wings (laughing). It was funny back then, but now everybody knows what they are. Eventually, we expanded and started offering branded Cluck-U chicken products through distributors and now have hundreds of pizza operators serving our chicken products."

Robert isn't the only one who sells branded chicken items through distributors. There are several others who have branded chicken products. The advantage to using a branded item is customers have an idea of what the product is even if they have never been to your restaurant before. One of these companies is La Nova Wings. They started selling Buffalo wings in their La Nova Pizzeria in Buffalo, New York years ago. Now they have a separate company dedicated to their wings and is doing $30 million in wing sales a year.

Here's a good example of what I am talking about with branded items. As the PMQ staff was returning from the Florida Restaurant Show in Orlando, we were walking out of a gas station wearing our U.S. Pizza team shirts, which has the La Nova logo on them because they are one of the team's sponsors. A guy stops us and asks us if we were with La Nova and comments on how much he loves their wings. Now here is a guy from Florida talking about wings that came from New York. With a branded item like La Nova or Cluck-U, people already know what to expect.

You don't have to offer just wings or strips, there are tons of chicken products you can consider. Robert with Cluck-U says you can offer chicken wraps, chicken on a stick, popcorn chicken, chicken subs, chicken pizzas or create something unique. Chicken salads, chicken cheesesteaks or chicken pastas are some other ideas. One thing to keep in mind when adding a new product is to give it a name that makes customers want to try it. There's something about the names Kickers and popcorn chicken that just makes you want to give it a try. What about Kickin' Chicken, or Love Me Tenders?

Jeff McGuirre with Bellissimo Foods said that he has seen a rise in chicken tender sales of 50 percent among independent pizza operators within the last year, especially the last few months. He added that the sale of chicken products has exploded on the West Coast, which is usually an indicator of future trends or patterns across the country. Jeff says that there have been significant increases in the use of chicken as a pizza topping as well as rises in sales of barbeque chicken and other products. One contributing factor may have been a problem a few months back in the sizes of wings. Many wings were too large, which created some sizing and portion problems causing operators to explore new avenues with breast products.

One thing that has kept some pizzeria owners away from chicken is having fryers installed. Personally, I prefer fried strips and wings. The breading is a little crunchier than baked products, which to me have a 'soft' breading texture. Don't get me wrong, there are some great tasting baked wings, but I guess that's why there's more than one flavor of bubble gum – people are different. You can still add chicken, even fried products, without installing vent hoods, fryers, sprinkler systems and all of the other bells and whistles that accompany fryers. As mentioned, you can go with baked items or choose to install one of the many different models of self-contained fryers out there right now. There are several companies with these units like Remco's Wing King, the AutoFry system and Perfect Fry. Most, if not all of these self-contained fryers require no vents or hoods and are pretty much 'plug-and-play' equipment.