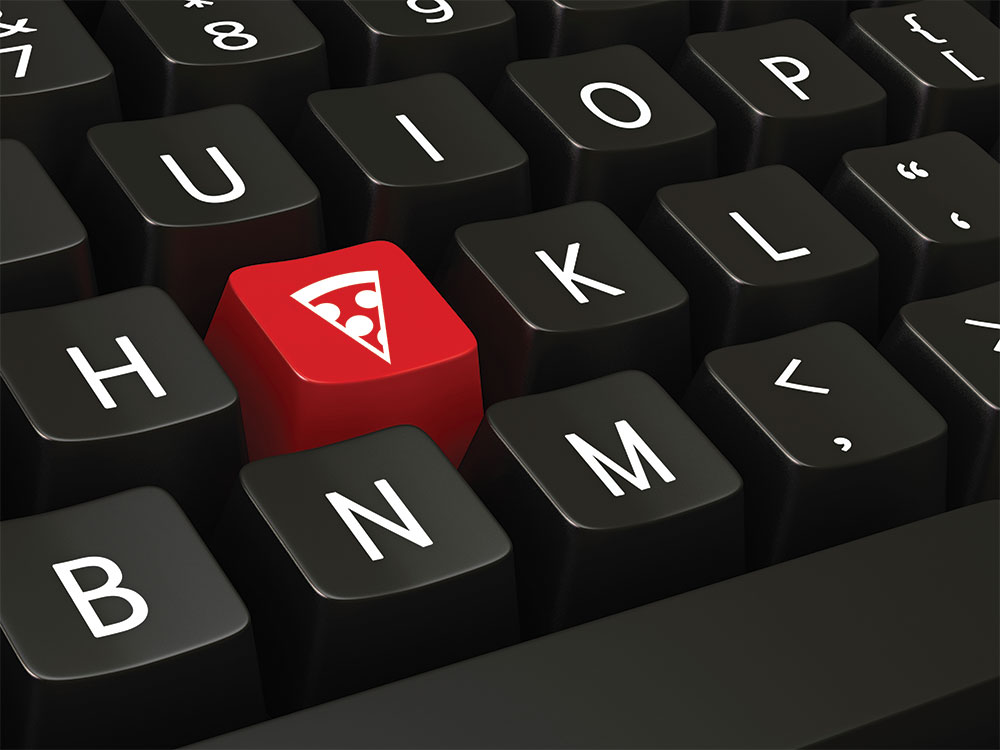 For better or worse, the United States is an online nation. According to The Pew Research Center, as of August 2012, 85% of the U.S. population was accessing the Internet via computer or mobile device. A similar report was compiled by Internet World Stats in June 2012—it showed that nearly 250 million people in the United States use the Internet. America has more Internet users per capita than any other country, and mobile phones are helping to grow those numbers every day. Those same 250 million people are also hungry—so it’s no surprise that online ordering continues to flourish.

When PMQ first started covering online ordering in 2008, the concept was still in its infancy, but the Big Three were starting to get everyone fired up. And while thousands of pizzerias have since joined the online ordering race, many are still not taking advantage of the full breadth of benefits that it offers.

Online ordering has always been about putting the consumer in the driver’s seat—allowing customers to go online and peruse a menu at their own pace, save their favorites and, in some cases, enjoy a fun user experience. For many in the pizza business, online ordering is seen as technology that must be offered in order to keep up with the times, and operators who don’t fully delve into this technology may be missing out on the marketing and earning potential that it offers. In addition to a 15% to 20% increase in ticket averages, there’s an average customer return rate of 95%, helping to organically boost customer loyalty with minimal effort on your part.

Surprisingly, there are thousands of pizzeria operators who are still on the fence when it comes to online ordering. Many question if it’s really necessary and whether it will be too much of a hassle to set up, while others don’t think their customers will use it. But operators who have been using online ordering for the past few years agree that it’s a must. “Just do it,” says Tony Troiano, co-owner of J.B. Alberto’s Pizza (jbalbertos.com) in Chicago. “There’s a fast-growing consumer segment that has a strong preference for online ordering. That being said, many will still prefer to speak to a live person. Offering online ordering allows the consumer to interact with your business the way he chooses.”

As president of Davis Pizza Enterprises, Diane Davis Barrentine owns 11 Domino’s Pizza (dominos.com) stores in North Mississippi and advises those who are thinking about offering online ordering to keep it as simple as possible. “Don’t clutter the screens—navigation is very important,” she says. “I’ve found that customers are way more satisfied when they’re in control of their own orders, and, with the younger generation, they’d much rather be online than talk to someone. But keep in mind that, even though they’re on the computer, you still need to bend over backwards when they call or come in. This is the future of your business, and you want to retain all of your customers, whether online or off.”

As for setup, Barrentine suggests looking for a national vendor with local representatives who can provide hands-on training. “It’s a big investment,” she says. “You’ll want the ability to meet with someone face-to-face when you need them.”

Some operators prefer to maintain their own proprietary online ordering systems. “I own my system and don’t pay a monthly fee,” says Ron Mathews, owner of Rockstar Pizza (rockstarpizza.net) in Brownsburg, Indiana. “It was a bigger up-front fee, but I have more control over it, and it was a simpler transition. If I would have known that mobile apps were coming when I set mine up initially, I would have gone for something even simpler and more streamlined.”

“Everything is moving online, and you’ll be falling further and further behind the longer you wait to start online ordering,” says Jennifer Young, the director of marketing for Figaro’s Pizza (figaros.com), a Salem, Oregon-based chain with more than 50 pizzerias in nine states and overseas. “We’ve been offering online ordering successfully since 2010; we try to make it as easy as possible for our customers, which has helped our sales increase steadily over the past three years.”

Once you’ve gotten through the setup process, online ordering is a win for everyone involved. While Troiano admits that it’s sometimes a struggle to convert customers who aren’t tech-savvy, he says the extra work that’s initially required pays off. “Some of the biggest benefits include customer self-service, which is the ordering method of choice for the younger generation; less likelihood of mistakes by employees since the customer assumes responsibility for his order; fewer customer complaints related to phone service; cost savings obtained through efficiency; and no waiting on hold,” Troiano says.

“Periodically, we offer 50% off any pizza when a customer orders online. We always see a sales spike of 5% to 15%, and sales remain strong for a few weeks afterward.”
—Diane Davis Barrentine, Davis Pizza Enterprises (Domino’s franchisee)

Through aggressive—and consistent—marketing, most operators start to see online orders flowing in right away, but they typically pick up steam after four to six months. It’s important to spread the word about your online ordering capabilities on everything your customers receive from your pizzeria—from box toppers, door hangers, direct mail, magnets, signage and menus to websites, email blasts, business cards, social media pages, receipts and traditional advertising.

J.B. Alberto’s markets its online ordering through multiple media, including its website, social media and email marketing. Barrentine says that 25% of her stores’ sales come from online ordering and, in markets such as Washington, D.C., Los Angeles and Las Vegas, a full 50% of sales are coming from online orders. “In my stores, we promote the online ordering option on all of our printed materials; oftentimes, we don’t even list the address and phone number on promotional materials anymore, only the website,” she says. “This drives more traffic to the Web instead of our store or through the phone.”

One of the most effective promotions for attracting new customers to online ordering is offering a discount (such as a certain dollar amount or percentage off) for orders made online. One of the most popular online promotions that Domino’s runs, according to Barrentine, is its 50%-off week. “Periodically, throughout the year, we offer 50% off any pizza when a customer orders online,” she says. “We always see a sales spike of 5% to 15% during those weeks, and sales remain strong for a few weeks afterward.” For stores that were struggling to obtain online customers, this promotion has raised their online orders by 10% to 15%, Barrentine adds.

Young says that Figaro’s periodically offers 50%-off coupons in addition to 20%-off email deals once per month. “We promote online ordering on everything from our direct mail to our website to Facebook, print materials and more,” she says.

Offering something unique will also help you stand out from the pack when it comes to online ordering. Mathews is presently adding his gluten-free offerings to his online menu, which will include pizza, breadsticks, subs and desserts. “We have an award-winning gluten-free crust, and I’m excited to offer more gluten-free items to our online customers,” he says. In addition, Mathews sends an email blast to his customer database twice per week, on Wednesdays and Fridays, offering incentives such as free cheese bread and percent-off deals for ordering online. 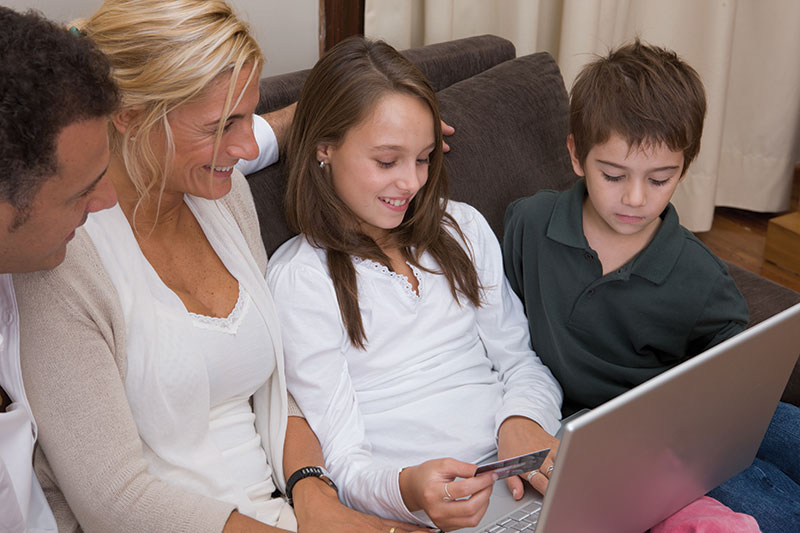 Several years ago, we saw the integration of online ordering and social media, allowing consumers to place an order from a pizzeria’s Facebook page and share their orders with friends, which, in turn, boosts marketing for the pizzeria. There are more than 1 billion people on Facebook, and a growing number of operators are taking advantage of this social media ordering option, which enables them to gather additional insights into demographics such as hobbies and interests, education, jobs and social interactions for more effective promotions.

To see how this functionality works, check out Pizzeria Serio (facebook.com/PizzeriaSerio) in Chicago; Ian’s Pizza on State (facebook.com/IansPizzaOnState) in Madison, Wisconsin; and Fox’s Pizza Den (facebook.com/FoxsPizzaDenTX) in Kyle, Texas. Each Facebook page has an “Order Online” button prominently placed near the top of the page under the company’s cover photo. After clicking the button, customers are given the option to order now, later or with friends—that is, they can invite Facebook friends to order menu items along with them (great for office parties, football game get-togethers and other social events). Imagine the impulse pizza purchases that can happen during late-night Facebook chatter!

For those already utilizing online ordering, mobile-friendly websites (websites that are optimized for mobile devices) and ordering apps are the next necessities. According to Nielsen, a global information and measurement company, 61% of Americans now own a smartphone, and consumers are demanding apps more than ever. Barrentine says that the Domino’s app is one of the perks that makes Domino’s stand out from others offering online ordering. “Customers tell us all the time how easy our iPhone and Android apps are,” she says. “They also like the Pizza Tracker, an application that lets them follow their pizza online from prep to delivery, even showing the names of who made their pizza and who will be delivering it.”

According to the recent webinar Pizza Pies for Mobile Eyes, distributed by ATS Mobile, 69% of consumers have used a mobile site to order food, with 44% using their phones to look up restaurant numbers and 36% searching for menus. A staggering 72% of those who order food via mobile phone are ordering pizza, and when asked why they prefer to order via mobile, the reasons listed included discounts, loyalty points, convenience and the ability to recall past orders.

Troiano says that J.B. Alberto’s offers a fully integrated iPhone and Android application, which has helped the pizzeria achieve 12% to 15% of its business through online orders—a number that grows every day. Mathews also recognizes the importance of offering a mobile-compatible site and app. “I’ve offered online ordering for about 18 months, and it accounts for around 10% of my sales,” he says. “I’m currently working on setting up a mobile app to reach even more people.”

Utilizing text message marketing and customized QR codes will help grab the attention of your new mobile customers, and a variety of geo-location mobile advertising companies have arrived on the scene as well. These specialized phone ads are not texts to your existing customers, but rather banner-type ads shown to smartphone users within a certain geographic area that you choose. Through this type of campaign, you have the ability to promote your online ordering page to thousands of local pizza lovers who can instantly order a pizza from you with the click of a button.

One of the best things about online ordering is its room for growth. In the grand scheme of the pizza business, online ordering is still a relatively new concept. With multiple options for setup, marketing and promotional deals, you’re only limited by the amount of work you put into it—and by your willingness to adapt to changing times.