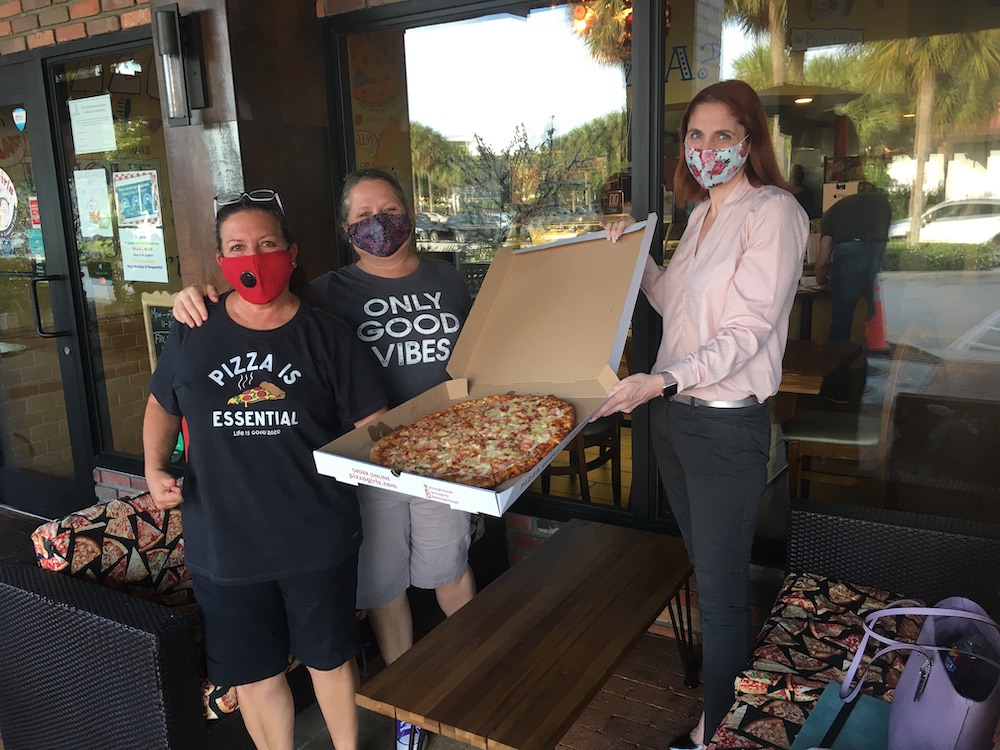 As the pandemic began to sweep across the country in March 2020, business owners found themselves struggling to understand what their future would hold. In Florida, governmental efforts to stop the spread of the disease shut down non-essential businesses. Restaurants were allowed to remain open for takeout and delivery only. Most restaurants were not set up to pivot to takeout-based operations, so survival was a struggle and, for many, an impossibility. But Americans needed their pizza, and the pizzerias had a smoother transition than most.

Not all restaurants are alike, and, as I recently learned, pizzerias had the upper hand during the shutdown. Many establishments were trying to design a takeout preparation and serving strategy while dealing with staff they could no longer afford and changing their menus. Quickly perishable items could not be invested in, and the menus had to be rewritten to adapt to the constraints of takeout/delivery. Some found the costs were not worth the rewards and shut their doors until the situation improved. But pizza, and those who bake it with love, were in a different class—most had already mastered the world of takeout and delivery, and the transition was a slightly less bumpy road. It was still not without significant challenges, though.

To write this article, I sat down with pizzeria owners to discuss their challenges and learned that, despite how difficult they had it, most other types of restaurants had far greater hurdles to jump. After hearing what they went through, it is hard to believe it could be worse. But one of the tragic results of this outbreak is glaringly obvious as we continue to see long-standing establishments shutter their doors.

“Pizza is essential.” This t-shirt slogan proved quite true in the early weeks of the COVID-19 shutdown. Pizzerias were one of the few eateries accustomed to a high volume of takeout/delivery orders. That, however, did not make it easy. Surviving as a business was still a challenge, and it came at a significant financial cost. Moreover, the potential costs of employee health and safety had to take a back seat to the health of the business.

Phoebe Reckseit and Jennifer Morales-Reckseit, who opened Pizza Girls in Florida in 1996, had two locations in January 2020. COVID-19 killed the West Palm Beach location as the office buildings stood empty, waterfront festivals were cancelled, and the late nightlife was closed. While the decision to close was not emotionally easy after nearly 25 years in the downtown area, an 80% reduction in profit left them with no choice. They were masters of the takeout business in that area, but there were no patrons.

Thus, all of their attention and resources shifted to their Palm Beach Gardens (PBG) location. Fortunately, that allowed them to bring their downtown staff to work on their expanded takeout business. However, even with more people picking up their favorite pie, the profits still were not there; the first month was strong when the competition was weak, but that did not last.

Phoebe and Jennifer had to sell their equipment from the WPB location. Getting rid of the big equipment was easy, but with few, if any, new restaurants opening at the time, they were not able to sell it all. And much of it sold for far less than it was worth. In the PBG location, the set-up had to be modified, moving furniture to create an assembly line to move pizza from the oven to the door for pick-up. That was just one of the changes the owners needed to make. Even though patrons were not allowed to enter the store, every Pizza Girls employee wore masks and gloves. After a food order was handed off to a customer, new gloves were put on. Significant efforts were made to ensure patrons were served safely and properly.

My work is all about employees getting hurt at work, so my mind immediately flipped into lawyer mode. I could not help but ask whether there was a concern about anyone on their team getting the virus. Like all of us, Phoebe and Jennifer had to do their best to be as safe as possible, but, like most companies with whom I work, they did not know whether there would be insurance coverage for an employee getting COVID-19 on the job. The answer to that question is complicated, long, and anything but clear.

In the early days of the coronavirus, when the infection rate was still low, it was relatively easy to identify the source of the exposure. People were not going out much except for necessary trips to the grocery store or pharmacy. For that brief period when quarantine was new, it was sometimes possible to determine from whom or where an infection originated. If the only potential place of exposure was their place of employment, workers’ compensation insurance may have covered the infection. In Florida, though, the legal standards of proof for an occupational disease or exposure are very hard to satisfy; thus, denial was equally plausible. With the virus now being so common and it being virtually impossible to pinpoint by whom someone was infected, workers’ compensation is not likely to accept the claims, leaving employees to count on their personal insurance, if they have it. In this industry, unfortunately, group health insurance is seldom a perk of employment.

Related: How to find that must-have insurance policy to protect your pizzeria

While employees’ actions on the job were of equal or greater concern, there was simply no time for Phoebe and Jennifer to think about it. Like every restaurant in town, their workers were doing what they had to do to get the food in the hands of the patrons. Although most customers were grateful for the effort, waited patiently for takeout orders, and proudly supported their local businesses, not all were quite so understanding. Keeping everyone happy was more important than ever. Making sure their customers’ favorite cheese or pepperoni pizzas were properly made and handed off hot and fresh was necessary to keep them coming back, perhaps for the Hawaiian pizza my son declared the best he’s ever had. It’s easy to focus on keeping customers, but providing takeout immediately after the shutdowns, before other restaurants were ready to serve, was also an opportunity for new business.

It all sounds pretty simple, but, legally speaking, it is not. This new format meant carrying pizzas through the parking lot and placing them in waiting cars or walking to the “tailgating” area established by diners to enjoy at the tables they had set up in the parking lot. I’d watched this on a number of occasions and had pizzas put in my car, but I wondered—and had to ask Phoebe and Jennifer—some questions. “What if someone got hit by a car? Or what if they were rushing and tripped over the curb stop?”  Everyone put the health of the business behind their own safety, workers included—the times demanded it.  It does not make the owners bad bosses; it’s how we come together to survive a crisis.

That said, the need to adapt to the circumstances does not necessarily protect the workers or the company. If an employee was hit by a car while running a pizza to a customer, would workers’ compensation coverage be available? In Florida, the answer is yes. But workers’ compensation is state-specific, so the answer might vary depending on where the accident occurred. Since the task of running pizzas through the parking lot is not a regular part of the job description and knowing employees were being put at a greater risk, pizzerias could see their insurance rates rise or could even be dropped by their carrier, either of which would be a huge financial sting while the business is fighting to stay alive as is.

While I could have spoken to countless Florida restauranteurs, I chose to focus on Jennifer and Phoebe because of a remarkable decision they made—and one for which I have profound respect. Anyone who enjoys escaping from their own kitchen and eating out knows the re-opening period was anything but clear or smooth; the rate of infections fluctuated, and decisions had to be made based upon the health of the residents. When the governor allowed Palm Beach County dining rooms to open up to 25% capacity, most restaurants jumped at the opportunity, but not Pizza Girls.

Phoebe’s step-sister and her father both contracted COVID, and, while her step-sister recovered, her dad did not survive. It was scary, so the owners made a decision most struggling businesses would not have considered: They did not reopen their dining room. They decided the health of their employees, who are like family, and of their customers, many of whom are friends, was more important than the slight increase in sales they may have seen. Some potential patrons may have been upset, but Phoebe and Jennifer took that risk. It was far more palatable than putting the health of their family and friends at risk.

Pizza Girls is open today, but not exactly drowning in business. Like most restaurants, they are still feeling the impact of people who are afraid of eating indoors, but their takeout business continues. Their profits are nowhere near what they used to be, but that is also in large part because, when money got tight, they chose to pay their employees a livable wage rather than the Florida minimum wage for servers. The safety precautions in place at Pizza Girls are readily apparent; they have made the patrons happy by going back to regular silverware, but every menu goes through an overnight sanitization process after only a single use; all staff members wear gloves and masks; hand sanitizer is on every table; the bathrooms are cleaned more often; the food is moved farther back in their open kitchen; and the seating remains socially distanced. That’s how it is today, at least. What will happen tomorrow, with the virus resurging across the country, is unknown.

The COVID-19 crisis has been deadly not just to people, but to restaurants. Unfortunately, like the virus, the devastation to the industry is far from over, and that includes pizzerias, despite the early boost in takeout/delivery business that they may have seen. As we watch the number of COVID-19 diagnoses rise faster than the dough with which our pizza is made, the challenges we face will grow as well. In the geographic areas where new restrictions are now being imposed, pizzerias stand ready with pepperoni and anchovies in hand, while other restaurant types may struggle more. While pizza is essential, first and foremost, we must protect the health of our employees, our patrons and our businesses to have any hope of surviving these difficult times.

Amy Siegel Oran is a partner with the Kelley Kronenberg law firm in West Palm Beach, Florida. She concentrates her practice exclusively on workers’ compensation defense.