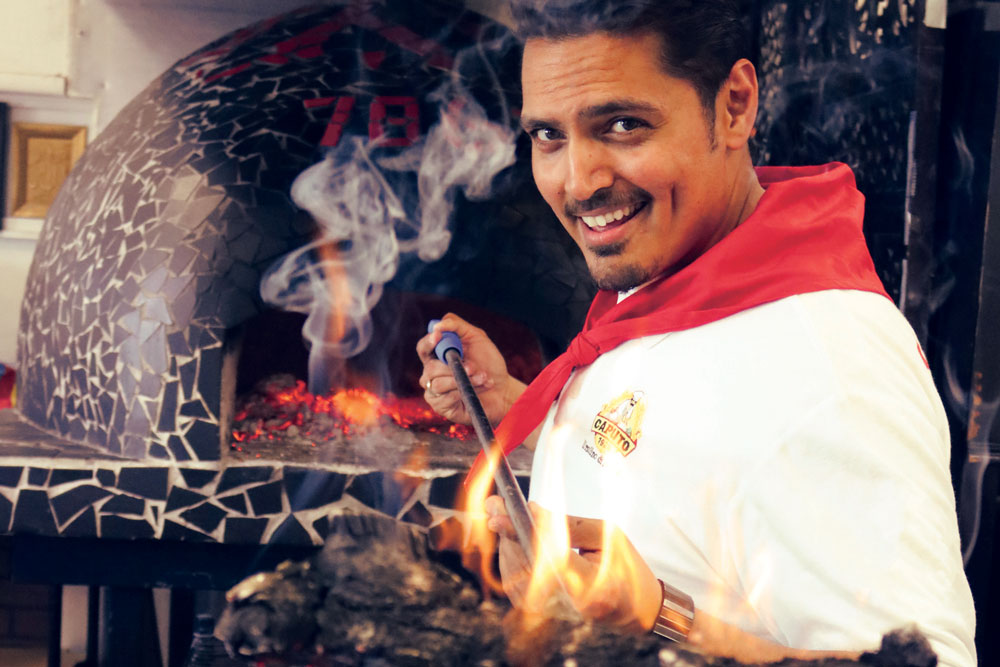 My only complaint about this month’s cover shot of pizzaiolo Ali Haider—photographed by our own Daniel Lee Perea—is that I don’t have dimples like that. I’ve always wanted dimples. Heck, I’d settle for just one. Sometimes I smile at my reflection in the mirror—we’re talking about my most rakish, devil-may-care grin—and believe I just spotted something that looks sort of like a dimple on my right cheek, but I know I’m kidding myself. Sigh. It’s just another wrinkle.

Also, staring at my own smiling face for too long, ironically, gets me depressed and irritates my bowels, which have enough problems as it is.

Good thing that’s not my picture on the cover. It’s Ali’s, and the stylish ex-Lamborghini spokesmodel was born to be featured on magazine covers. But the pizza visionary and founder of 786° Wood Fired Pizza Company in Sun Valley, California, is more than a chiseled, handsome face with an exotic pedigree (his parents are Indian and Iraqi, and he grew up in Kuwait). Cerebral, imaginative and curious, Ali only started making pizza for a living in 2014, but he earned accolades right away—based on Yelp reviews, USA Today named his place the Best Restaurant in California in 2016, and he won the Caputo Cup that same year.

Ali may very well be on his way to becoming a pizza industry legend. A master of culinary fusion, he has created all-halal masterpieces like the award-winning Bombay Tikka Masala and the Turkish Doner Kabob, and he’s even working on his first book, Defy the Norm. Keenly interested in what he calls “the science, art and culture of customer satisfaction,” Ali says the book will focus on the importance of the relationship between business owner and guest. “The idea,” he says, “is that you are not serving pizza. You are serving love and respect.”

We like the sound of that. As an Indian-born, Kuwait-raised restaurateur who brings his own diverse cultural traditions to Italian-American pizza, Ali is, in a sense, the living embodiment of pizza’s universal appeal. And when you think of pizza itself as the embodiment of love and respect, the future of our industry looks very promising indeed.