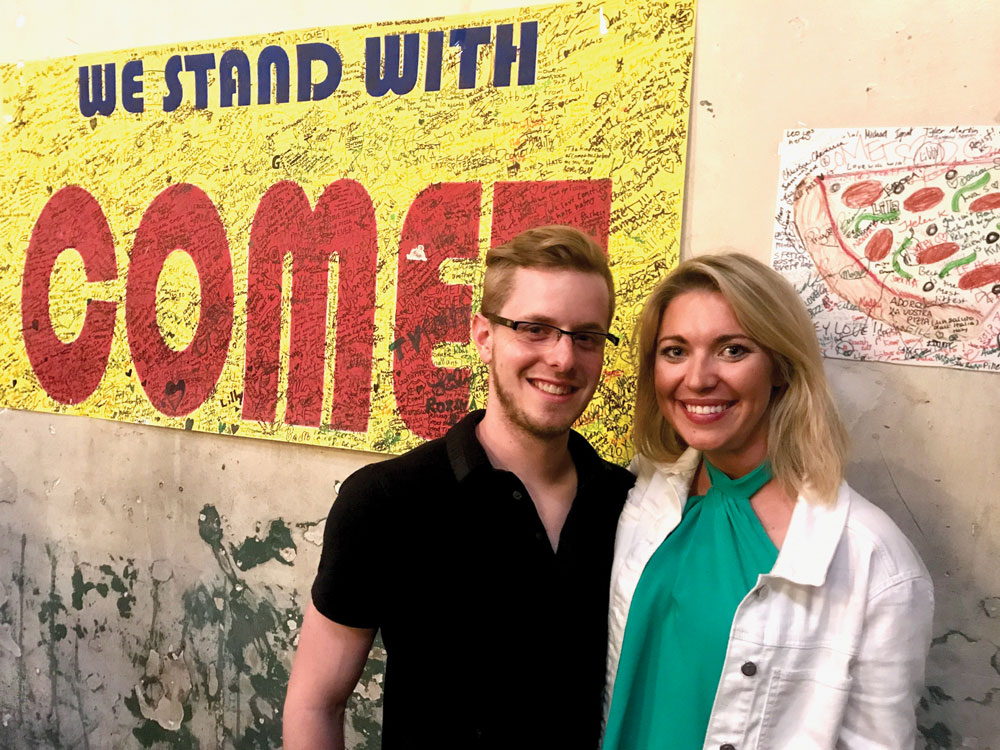 Related: The lessons of Pizzagate: How Comet Ping Pong dealt with far-right protesters

Comet Ping Pong, a family-friendly Washington, D.C. pizzeria that has been targeted by far-right conspiracy theorists, struck back against a group of protesters last week by blasting tunes by Lady Gaga and RuPaul while counter-demonstrators danced and waved their arms.

According to The Washingtonian, the protesters, roughly 20 in number, appeared to be part of a group called Official Street Preachers, which had also picketed the restaurant in January 2017. They apparently subscribe to a long-debunked conspiracy theory that Comet Ping Pong, in association with Hillary Clinton and other prominent leaders of the Democratic party, secretly operates a vast pedophilia ring in its basement—even though Comet Ping Pong has been shown to have no basement.

The Washingtonian described the protesters as “homophobic,” and a photo depicted them waving signs about the evils of abortion and the perils of hell as they attempted to disrupt business at the pizza shop. When asked why they chose Comet Ping Pong, located in Chevy Chase, Maryland, as their target, one protester said, “Pedophilia. They serve up little boys on pizza over there.”

The theory of a pedophilia ring, dubbed Pizzagate, has been investigated by law enforcement authorities and shown to be baseless. This hasn’t prevented anonymous threats against the lives and property of Comet Ping Pong’s owner and employees since 2016. In December of that year, a man identified as Edgar Maddison Welch, carrying a loaded AR-15, stormed into the restaurant to “investigate” the claims, fired a shot and was soon arrested. He later admitted that he found no evidence of pedophilia or even a basement in the building.

Comet Ping Pong’s management has tried to weather the ongoing storm quietly, even as the harassment has continued over the past four years. But last week, as more protesters descended on the shop, customers of the pizzeria stepped in to fight back. With police officers looking on, they danced to songs like Queen’s “We Will Rock You” and Lady Gaga’s “Born This Way,” drowning out the protesters’ bullhorn-enhanced chants and eventually driving them away.

At one point, before the protesters piled into a white van and departed, Comet Ping Pong owner James Alefantis brought the protesters a peace offering: a tray with glasses of champagne. In a video posted on YouTube, one of the protesters is seen emptying the glass onto the ground and then knocking the tray over.

Bryce Reh, Comet Ping Pong’s manager, told PMQ in 2018 that his primary strategy for handling the ongoing protests and harassment was “to maintain [our] business standards.”

“The way I saw it was, the whole game would be lost if we allowed our standards to slip, which would be the touch of death for the business—which is what all the ‘Pizzagaters’ wanted,” Reh said at the time. “It’s not always easy to turn your focus away from harassment, but I think the ability to identify what is a real priority rather than a perceived one is crucial. I also think you need to surround yourself with people you can trust completely and that give very clear-headed advice. Considering we were being attacked by tens of thousands of people as well as major national figures, we couldn’t choose a path that required us to be louder than anyone else. Every ‘move’ we made had to be specific, quiet, but to the point. To ‘raise our voice,’ as it were, would mean we were on their home turf, and we refused to allow ourselves to be sucked into a battle not of our choosing. At least, as much as possible!”