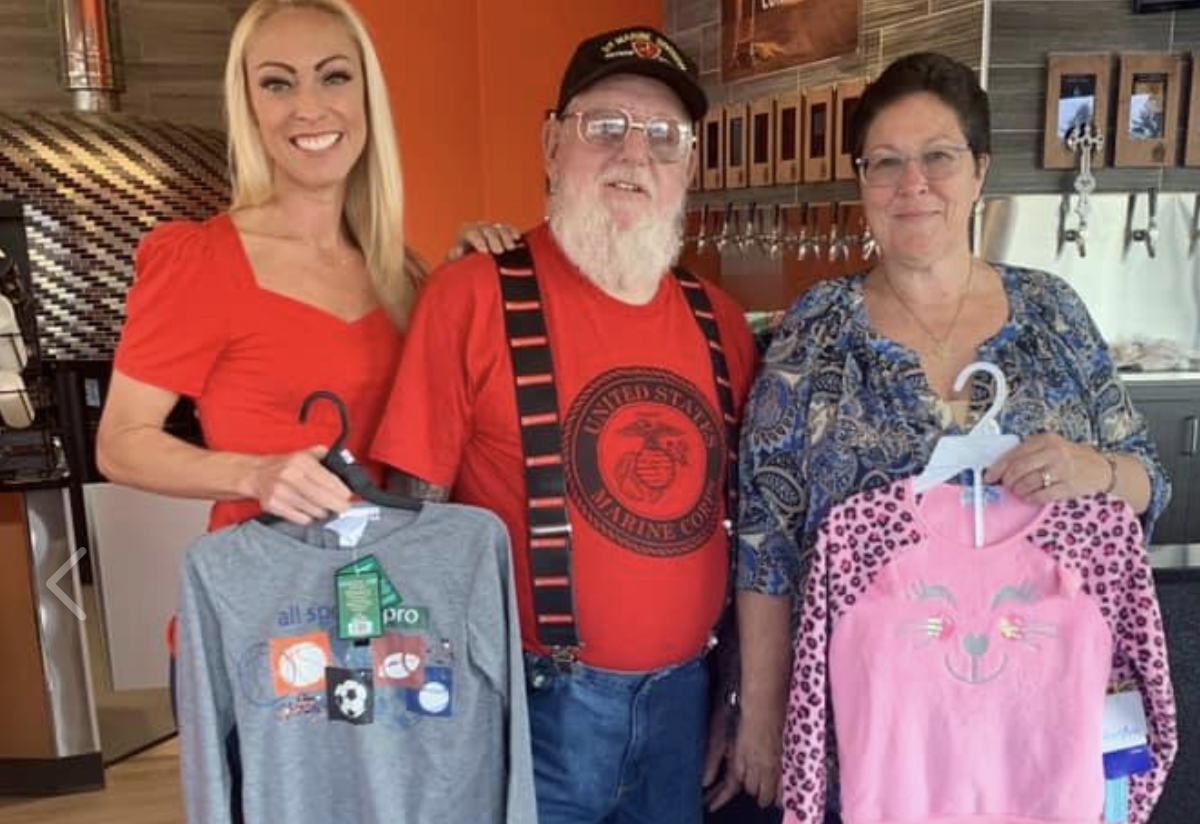 Jacqueline Weiss, who co-owns 1000 Degrees Pizza with her husband Joseph, poses with their parents who donated two pairs of pajamas to Oliver's Pajama Project.

Oliver Koenig-Paquin understands the power of a pair of pajamas. As a student at Cathy’s Nursery School in Glastonbury, Connecticut, three years ago, he learned that his teacher was collecting donations for the Scholastic Book Club, which planned to give a free book and a pair of brand-new PJs to provide warmth and comfort for needy children during the long winter nights.

Oliver went straight home and asked his parents, Danielle and Tammy, to donate 100 pairs of pajamas for the cause. They gently explained they couldn’t afford it but would help him find other donors to meet his goal. Oliver asked his friends, his neighbors, even his barber to chip in – and they did. Over the years, Oliver’s Pajama Project grew and grew to a new goal in 2019: collect 1,000 sets of brand-new pajamas to go with storybooks for children all over Connecticut.

And the Glastonbury franchise of 1000 Degrees Pizza is helping him. “Oliver and his parents are regular customers of ours, and we have developed a very nice friendship with them over the past several months,” says Jacqueline Weiss, co-owner of the pizzeria. “They posted their annual project on Facebook, and we immediately reached out to them to provide support for Oliver’s goals.”

1000 Degrees is the first corporate partner in Oliver’s Pajama Project, and in just four days they collected more than 50 pairs of pajamas on top of Oliver’s own collection of 100 pairs. They also received cash donations to purchase more pajamas. It might have helped that 1000 Degrees threw in a wholesome temptation to spur donations: a free 10-inch pizza for each pair of pajamas donated.

“Customers are able to choose any pizza, including our build-your-own, which has unlimited toppings,” says Weiss. “Donors bring the pajamas to the restaurant and place them into a large box. We provide them with their free pizzas at that time or give them a free pizza card to be used at a later date.”

Related: How to Find a Charity Partner That Aligns with Your Brand

The pizza-for-pajamas drive will continue through December 6. Oliver’s Pajama Project has also brought a lot of goodwill to the pizzeria. The restaurant posted a heartwarming story of a customer who donated six pairs of pajamas and then donated the free-pizza gift cards back to 1000 Degrees, to be given to customers who needed them more, such as the elderly or families with young children.

“We feel fortunate to be a part of Oliver’s Pajama Project,” Weiss says. “It is a very heartwarming, feel-good story, and we get great satisfaction being able to help this little man as well as give something to those in need. We are reaching out to other owners in the 1000 Degrees franchise [network] to see if they would like to be included in our partnership with Oliver. We would love to be able to get pajama donations from all over the country.”

Since the day 1000 Degrees opened, the pizzeria has provided a 50% discount to veterans, active-duty military, and first responders. It also hosts fundraisers for local schools, churches, high school sports teams, and the Special Olympics as well as a Safe Grad program for graduating seniors. Cub Scouts and Webelos meet at the pizzeria to make their own salads, stretch pizza dough, and assemble their own delicious pies.

The pizzeria’s owners even teamed up with a nonprofit called Carry My Brother, Inc. that provides academic and athletic opportunities to disadvantaged children. For that nonprofit, the pizzeria collected donations from customers, and each dollar donated earned a raffle ticket into a drawing for a year’s worth of free pizza. The pizzeria then donated 100% of the fundraising back to the nonprofit.

Despite being only a one-year-old business, 1000 Degrees Pizza has left an immeasurable impact on its local community. “We are a part of a franchise, but we run our restaurant as a family business,” said Weiss. “We are very focused on community initiatives, and we are always looking for the next opportunity to provide our support and assistance.”

Related: Cultivate a New Generation of Pizza-Loving Patrons by Designing Promotions and Events for Children