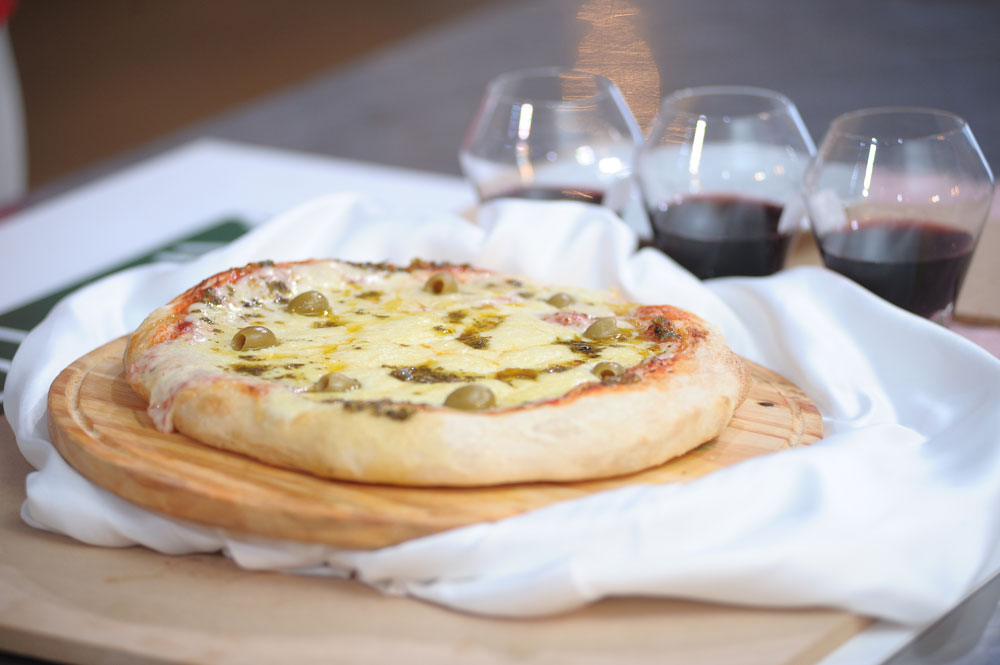 Watch out, New York and Naples. Two South American port cities—Buenos Aires, Argentina, and São Paulo, Brazil—consistently make the list for best places in the world to eat pizza. What makes these cities like sisters in pizza? A large Italian population with a history of pizza culture is a start.

Both North and South America received a wave of Italian immigration in the early 20th century. Javier Gustavo Labaké of APPYCE (Asociación de Propietarios de Pizzerías y Casas de Empanadas), the pizza association and school in Buenos Aires, says their version of pizza was made primarily to satisfy hunger. “Argentinian pizza is abundant in its amount of dough and ingredients. In Argentina, we work with dough that has risen for just three to six hours with a lot of yeast. This way, we achieve a dough that continues to produce carbon dioxide, and we add an impressive amount of toppings to it, so you’re able to satisfy anyone with just a few slices.” Pizza in São Paulo follows a similar model, where toppings are plentiful and pizzerias offer a huge variety of tastes and toppings. “Any pizzeria [in Argentina] can have 25 varieties of pizza, minimum,” says Labaké.

With all that pizza variety, is it any wonder American chains had it rough coming into the Argentinian and Brazilian markets? Carlos Zoppetti of the ConPizza Institute in São Paulo says Pizza Hut’s debut in Brazil was unsuccessful. However, with time the company was able to gain a foothold and now has 16 stores scattered around São Paulo. “There was resistance among consumers when Pizza Hut first opened in 1989 because Brazilians were used to an artisanal product,” Zoppetti says. “Today Brazilian consumer habits have changed, and food eaten outside the home has increased by 14% in the past 15 years. This has helped Pizza Hut be more successful.”

In Argentina and neighboring Uruguay, American chains are scant. Domino’s and Pizza Hut both opened and closed their doors in Argentina. The whole of Uruguay has a single Sbarro in a shopping mall. “Argentina’s economy varies radically every four or six years, making it not very tempting for foreign investors,” Labaké  notes. “However, when investments are made, they tend to get very good results since the consumption of pizza in Argentina is high.”

Ferraz cites an important shift in how Argentina—and much of the world—is now consuming pizza. “Every culture has their pizza. What you see now is every kind of pizza everywhere. In the past, for example, Argentinians didn’t accept Neapolitan pizza. It’s small, it’s not crunchy, there are few toppings. Today there is much more knowledge and respect for other traditions. We are living in an age of a pizza revolution.”

Zoppetti confirms that new types of artisanal pizza styles are also becoming popular in Brazil. He believes there is still much room for foreign investment. “We expect a more sustainable economy [now that the country’s former president is in jail on corruption charges], and this has gotten foreign companies interested in doing business in Brazil.”

Due to their rich pizza history and brusque changes in economy and government, Latin America has been one tough cookie for American chains to crack. Nonetheless, pizza of all types is gaining popularity, providing economic opportunities for companies domestically and internationally.