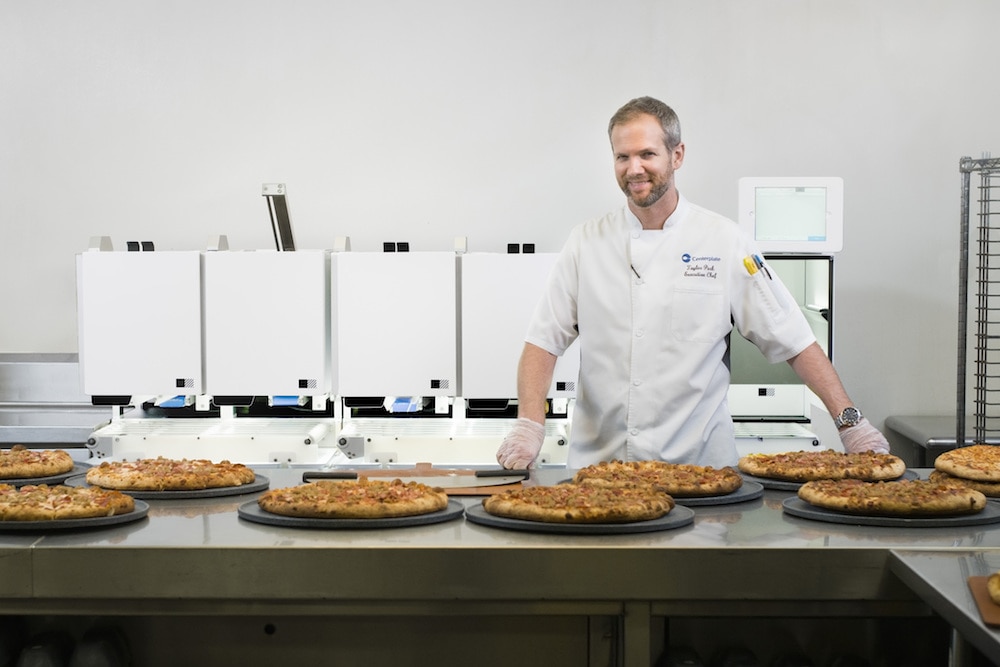 Centerplate, a leader in live event hospitality, used and showcased Picnic’s pizza robot, which can produce up to 300 12” customized pizzas an hour. The robot made news in October when it created pizzas at T-Mobile Park, home of the Seattle Mariners.

Related: This pizza-making robot can reportedly make 300 pies an hour

Picnic is one of a slew of startups and industry giants working on pizza-making robots and other automated systems that can save labor costs for restaurants. Picnic’s pizza robot is small enough to fit in most pizzeria kitchens and works with fresh ingredients, although other processes—including dough preparation, sauce making and baking—are handled by people. It can make customized pizzas featuring any number and combination of toppings.

The pizza robot is actually an AI-based automated assembly line, with a conveyor belt on a metal base. A human worker places the premade dough into the first module. The pizza moves through a series of modules that squirt tomato sauce onto the dough, followed by cheese and other toppings. It takes a little more than a minute to get the pizza ready for the oven.

Picnic essentially leases its pizza robot to the restaurant for a regular fee (based on the volume of pizza being made) and provides ongoing maintenance and software/hardware updates. “People are getting more accustomed to the idea of not owning technology because they perceive it to be something that changes quickly,” Picnic CEO Clayton Wood told GeekWire in October. “They don’t want to buy a major investment and have it be obsolete in three years.”

Related: Why pizza robots could save the restaurant industry

Held annually in Las Vegas, CES is the largest technology event in the world. “This is one robot that won’t be a CES exhibitor only showing futuristic concepts,” Wood said in a press release. “It is already in use in real-world kitchen settings and will only continue to grow its capabilities, as will be seen through Picnic’s delivery of mass customization food production and great-tasting pizza provided to CES attendees.”

Related: Danger, Will Robinson? As robotics improve, how will they affect the pizza industry?

Wood noted that Picnic’s technology can be used to produce other types of foods. “Bun, bowl, tortilla or plate—our automated assembly system is designed for and capable of improving the businesses of many foodservice segments,” he said.

“The potential for Picnic’s technology is broad-reaching for the pizza and other food industries,” Kati Fritz-Jung, a former Little Caesars executive who serves as an advisor to Picnic, told GeekWire. “Innovations like this will change the way we approach customer service, product quality, operational costs and overall consumer satisfaction.”