Well, the numbers are in for 2001 and what a crazy year it was. In 2001, the pizza industry felt the effects of cheese that approached $2 a pound, skyrocketing gas prices last summer, the fallout from the terrorist attacks on the World Trade Center, not to mention the frozen pizza monster. Reports that we have been reading indicate restaurant sales for this year are starting to creep back to previous levels, but based on statistics from previous years, last year was a tough one. We would like to thank Technomic, NPD FoodWorld, Info USA and the Leading Edge Group for all of their help in putting this report together. So, without further adieu, let’s get down to brass tacks. 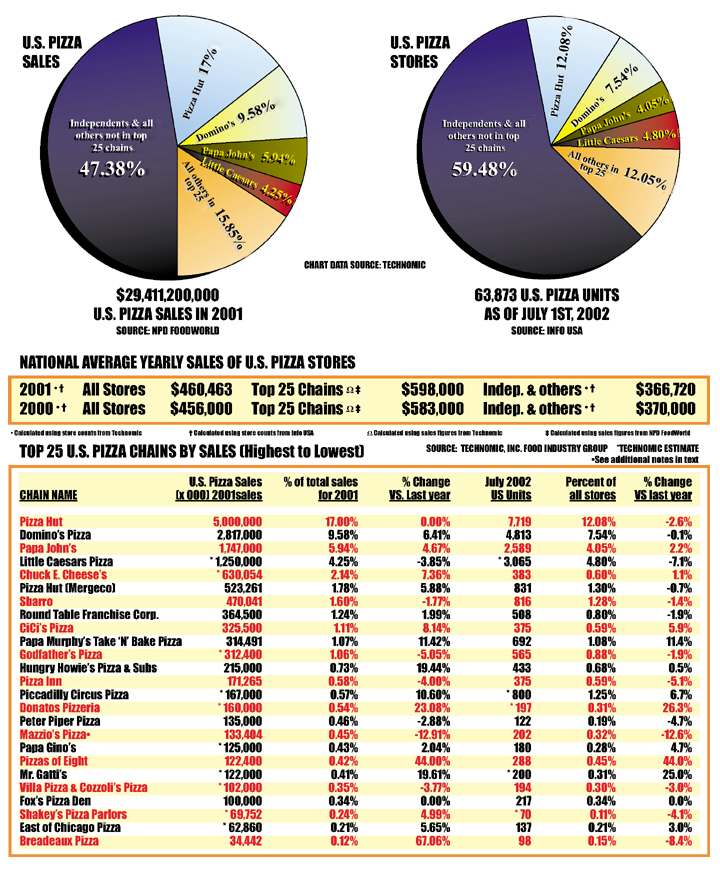 There’s good news and bad news for the 63,873 pizzerias we currently have in business. The good news is there were 4,233 new pizzerias that opened between July 1, 2001, and July 1, 2002. The bad news is there were 4,300 pizzerias that closed during that same period leaving the industry with seven less stores overall. Industry sales for pizza were up 1 percent for 2001, which gave the pizza industry overall sales of $29.4 billion. The Leading Edge Group, which puts out a report on the pizza industry, predicts the pizza industry will be worth $33.9 billion at retail by 2005. The bad news is traffic at the QSR Pizza Category remained flat during the period of June 2001 through May 2002. The average check for the QSR Pizza Category for the period between June 2001 and May 2002 was $5.78. Average sales per unit for all pizzerias increased to $460,463 from $456,000 the year before, but this appears to reflect gains in the top 25 chains. Let’s take a more detailed look at the break down. 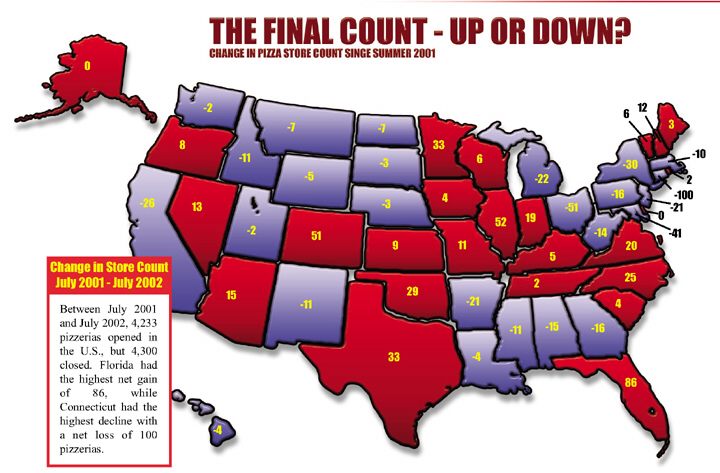 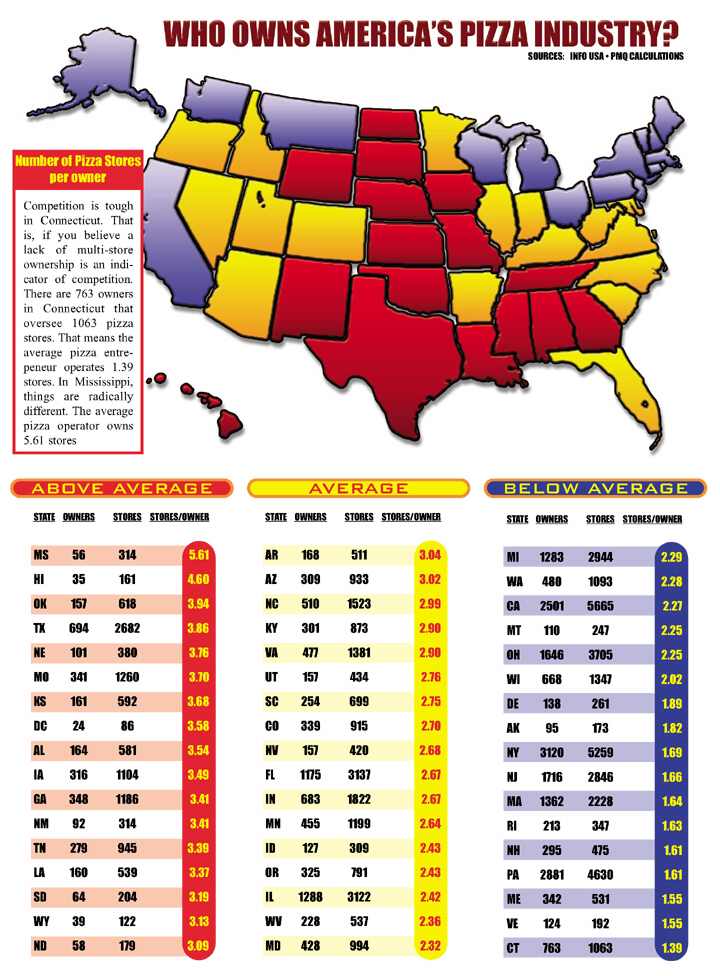 The drop in numbers by independent operators appears to have been filled by the top 25 chains. While seven of the top 25 chains were reported to have sales losses from the previous year, there are a few shining stars in the rest of the pack. Average yearly sales per unit for the top 25 increased to $598,000 from $583,000 the previous year. The top 25 had only marginal gains in their share of units, but their percent of the total industry sales looked good for most. Reports from around the industry indicate that part of the reason may deal with the pizza wars going on with the Big Four (Pizza Hut, Domino’s Pizza, Papa John’s Pizza and Little Caesars Pizza). New product launches, such as Cheesy Bread, The P’Zone and the Spinach Alfredo pizza have been quite popular with consumers. All of the Big Four are either launching new products with massive marketing campaigns or testing new concepts in limited markets to see how they will perform. The Leading Edge Group’s report on the pizza industry stated, “New products will help fuel sales, as will consolidation in saturated geographic areas.” 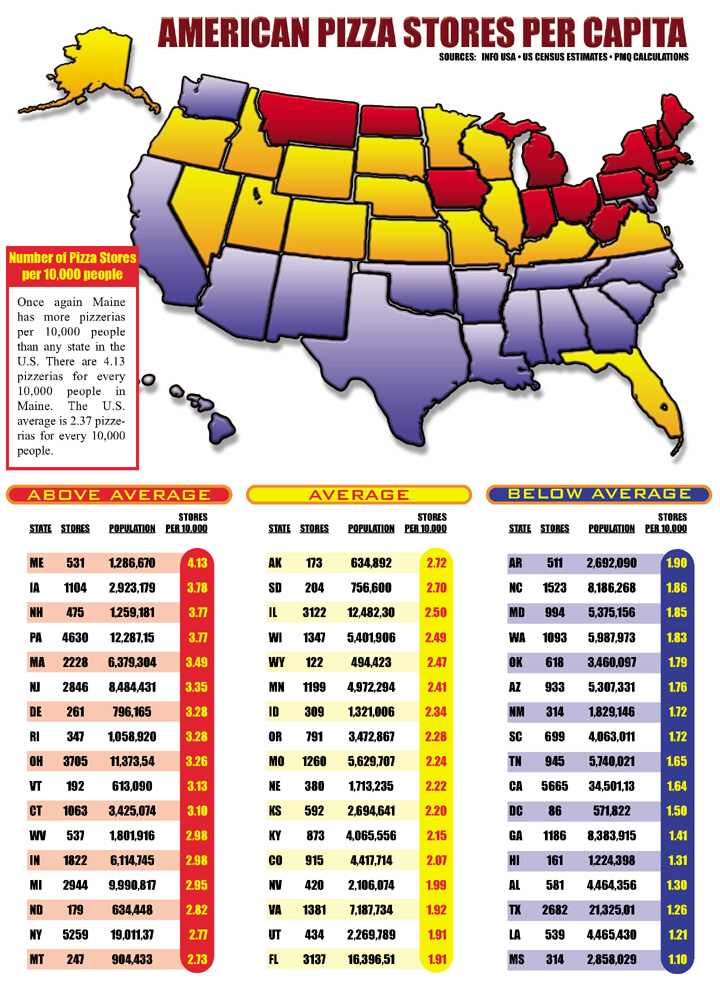 The Winners, the Losers and the PMQ Pizza industry enterprise of the Year

There were a few pizzerias that stood out in the crowd. Let’s take a look at some of the winners. Let’s start with PMQ’s Pizza Industry Enterprise (PIE) of the year Donatos Pizzeria Corp. Donatos was able to achieve a respectable increase in same-store sales while managing a 26 percent increase in the number of total units. While they may not be the top dog in sales and units, it appears that Donatos has been very effective in recruiting franchisees and marketing their product. With their 3D store of the future in operation, they are making the move that we would expect from a McDonald’s-owned pizza chain. Finally, one statistic that says it all is that this year Donatos passed Papa John’s in average unit sales. Technomic ranked Donatos as the ninth fastest growing chain in the U.S. based on sales increase percentage out of all restaurant chains. Donatos also came in eighth in the U.S. in the 10 fastest growing restaurant chains. This was based on unit increase percentage. Congratulations to PMQ’s Pizza Industry Enterprise of the Year: Donatos Pizzeria Corp. PMQ will follow up on this with a report on Donatos Pizzeria Corp. in the fall 2002 issue.

While the top 25 chains appear to be doing quite well as a whole, there are a few amongst the wolves who are showing signs of weakness. Technomic reports Mazzio’s Pizza’s sales down 12.91 percent with a 12.6 percent decline in units.

According to Mazzio’s Pizza, Technomic under-reported total sales by $6 million, which is the result of combining stores over the past year.

There are a couple of trends to note that are either emerging or maturing in the pizza industry. One trend is a rise in C-store locations. It seems that everywhere you look there is a convenience store installing a pizza counter overnight. These are not just some microwavable pizzas you grab and heat; storeowners are installing countertop conveyor ovens and serving cooked pies.

The success of this segment may be attributed to convenience and the low cost of frozen pizza. Consumers know they can fill the freezer up with cheap frozen pizzas and cook them when the urge hits. Also, the rise in the quality of frozen pizzas has helped too. Consumers can eat a true “fresh out of the oven” pizza at home now that doesn’t taste like cardboard. This may be one reason the take-and-bake segment has found a niche.

It appears that convenience and new products are the key factors in the new growth areas. C-stores are offering an increasingly satisfactory product on the fly, take ‘n’ bakes are winning over customers and are quick and can be taken home and the frozen pizza segment is coming on strong. Most of the top 25 chains are doing well, especially those who are continually putting out new products. If current trends continue, the winners next year will probably be those who control costs, offer news products and make it more convenient to grab a pie or slice while on the go or a pie to cook later. 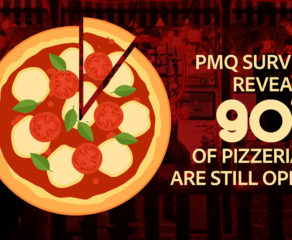 PMQ Survey: 90 Percent of Pizza Restaurants Still Open Thanks to Delivery and Carryout 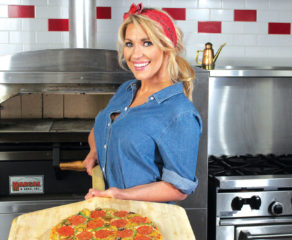 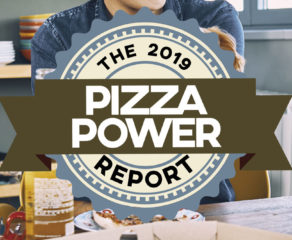