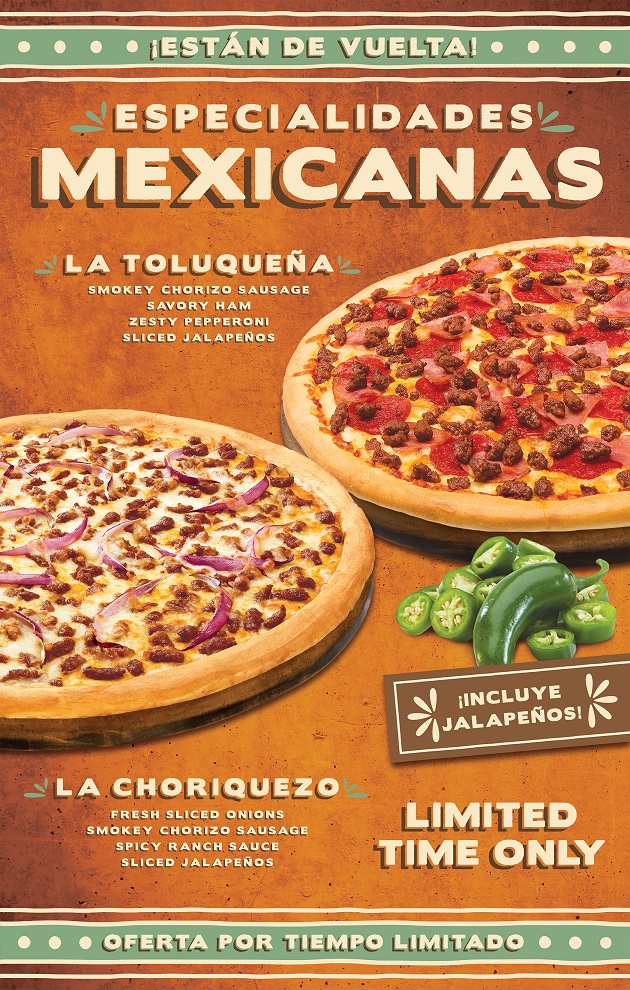 For 13 full weeks, from Oct. 2 through Jan. 3rd, Pizza Patrón is bringing back two of its most popular LTO ‘Favoritas’ pizzas currently not on the menu. The LTO combo includes La Toluqeña and La Choriquezo, two large specialty pizzas based on traditional Mexican recipes for just $16.99 at all Pizza Patrón locations.

The Toluqueña pizza features a traditional three-meat combination with a twist:  pepperoni and ham with the chain’s proprietary “Toluqueño-style” chorizo in place of Italian sausage.  The La Choriquezo pizza is based on a well-known traditional Latin American appetizer, sporting an extra portion of real mozzarella cheese, smoky chorizo sausage, and fresh-sliced onions on a base of Pizza Patrón’s original spicy ranch sauce.  As an added bonus, jalapeños can be added to both pizzas for no extra charge.

“Our customers want and expect to find Mexican and Latin American flavors from us that they cannot get at traditional pizza outlets,” said Andrew Gamm, brand director for Pizza Patrón. “We are committed to providing our guests with unique pizza options, and this specialty pie combo delivers on what we do best, ‘más pizza’ for ‘menos dinero.’”

Since 1986, Pizza Patrón has been committed to making its promise of “Más Pizza. Menos Dinero.®” a reality for every customer.  From the beginning, the brand has been recognized for its ‘fresh-dough’ pizza, its low prices and its trademark “friendly, bicultural service.”  In 2007, the company drew international media attention with its PIZZA POR PESOS® program when it began accepting Mexican Pesos at all of its restaurants.  In 2012, the company’s PIZZA POR FAVOR™ promotion that gave free pizzas to anyone who ordered in Spanish sparked international news coverage and lively debate throughout the U.S.  Today, Pizza Patrón is the leading Mexican pizza brand in the U.S. and remainsdedicated to bringing its unique experience to life with every pizza made, and in every community it serves.