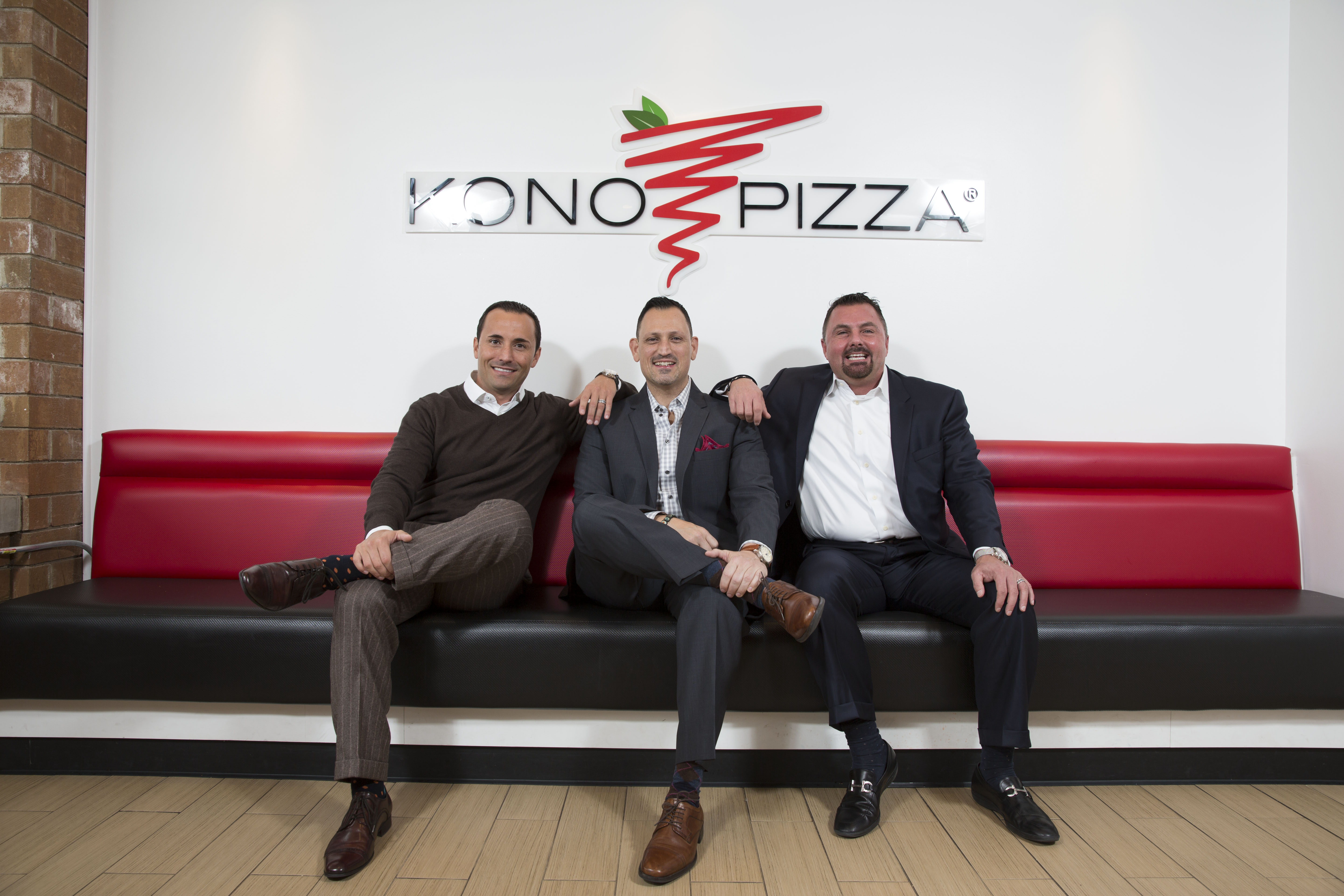 Pizza in a cone? It’s not half as crazy as it sounds. In fact, pizza cones have been selling like, well, hotcakes in Europe for years now. According to The Guardian newspaper in the UK, Rossano Boscolo created the Pizza Kono concept in Italy and set up a training school that developed the company’s unique oven in which to cook the pizza cones. Boscolo’s techniques reportedly prevent the mozzarella and tomatoes from releasing water and moistening the cone, ensuring that the cone itself stays crunchy and doesn’t leave a mess. Now Pizza Kono has crossed the Atlantic, thanks to entrepreneurs David Ragosa, Carlo Ruggiero and Greg Kinlaw. PMQ asked the trio to participate in a Q&A and explain how their concept works and what the future has in store for Pizza Kono. 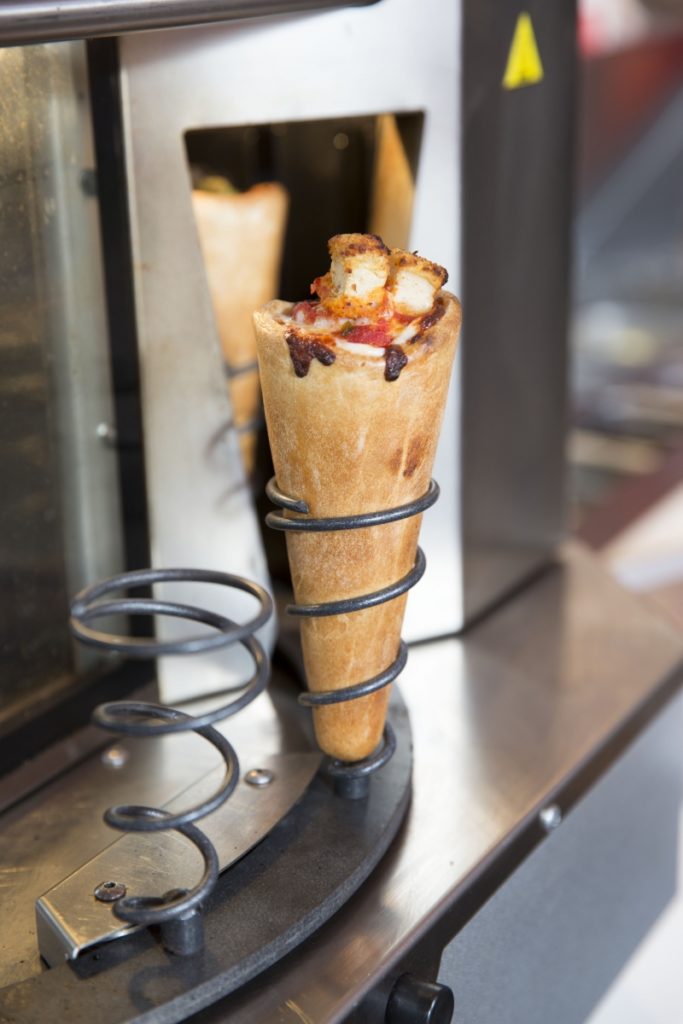 PMQ: Tell us a little bit about the Italian origins of the pizza cone itself and how it led to the creation of Kono Pizza.

A: In brief, three entrepreneurs, who have built previous successes in the U.S. fitness, food and technology industries, stumbled across a concept that had already revolutionized the European market: pizza cones. Inspired and created by Italian recipes and culture, Kono Pizza, which has more than 130 locations worldwide, sets aside the traditional triangle- or square-cut slice and offers consumers an on-the-go way to enjoy their favorite food. Shocked that the concept had not yet been introduced in the States, the entrepreneurial team has catapulted Kono Pizza into the U.S. marketplace, with their sights set on changing the pizza game.

PMQ: Can you tell us a little bit about each type of pizza cone and its flavor profile?

A: We offer four types of cones, including:

Breakfast Cones (Kono Colazione): To get a taste of Kono Pizza all day, the brand offers consumers a cone filled with a full and balanced breakfast. The best-selling breakfast cone is the Salsiccia Prima, which includes fresh eggs, sausage and four-blend cheese. Other breakfast options include Pancetta Prima (fresh eggs, ham/bacon and cheese) and Vegetazione (fresh eggs, peppers and cheese).

PMQ: What’s the process for creating a pizza cone? Are they made from scratch in-house every day or what?

A: Kono Pizza cones are made to order with fresh Italian ingredients. Our dough is pre-shaped and shipped in from Italy. We fill the cones with a low-moisture, part-skim blend of four cheeses, our proprietary Kono Pizza sauce, smoked and cured meats, and fresh vegetables. Every cone is assembled and cooked fresh to order in under three minutes for our customers. Nothing is precooked.

PMQ: Does the process require any kind of special equipment above and beyond the standard pizzeria equipment?

A: Yes, we have a proprietary Kono Pizza oven that was created to hold the cones upright and cook them through in under three minutes.

PMQ: What are your most popular menu items?

A: The Margherita and Chicken Parmesan pizza cones are our best-sellers. Customers love them!

PMQ: From a health perspective, how does a typical pizza cone compare to a regular pizza in terms of calories, fat, etc.?

A: Using a thinner crust and a low-moisture cheese to reduce the amount of carbs and grease in the dish, Kono Pizza cones have an average 250 calories per cone. A typical slice of pizza has upwards of 450 calories per slice. Even better, you just need one pizza cone to fill you up because they’re loaded with fresh ingredients. Sometimes you may eat multiple slices of pizza to get full, which adds to the calorie count even more.

PMQ: For potential franchisees out there, what’s the key to successfully marketing this product?

A: In an over-saturated market it’s hard to stand apart, but the Kono Pizza cone differentiates itself with its unique concept, so you don’t have to use any crazy marketing ploys to get attention.

PMQ: What’s the price point for your pizza cones, and is there a good margin built in?

A: Kono Pizza cones sell for $3.99 per cone, plus more depending on the meal combination. The current margin built on the price is about 30 percent.

PMQ: Is this sit-down, dine-in fare, or is it better for delivery and carryout?

A: Kono Pizza is a quick-service restaurant, focusing on smaller locations for an on-the-go experience with fresh, made-to-order product. The locations do have areas for guests who would like to sit down and dine, but with the convenience of eating pizza on the go, many customers are grab-and-go.

PMQ: What kind of strategy do you have for expanding this concept?

A: Kono Pizza is expanding nationwide through franchising. Our mission is to keep everything simple and affordable for franchisees by offering a streamlined, manager-driven business model with a low start-up cost of $150,000 to $345,000. The Italian-inspired recipes and cooking processes are standard throughout all locations, simplifying the hiring process for franchisees (a full-time, experienced chef is not necessary). In addition, each location requires a limited staff of eight to 10 part-time employees and one full-time manager. We currently have 15 units in the development pipeline, including locations for Florida, North Carolina, New Jersey, California and Nebraska. We are looking to expand in all areas nationwide and hope to have 50 units open, with 20 more in the pipeline by 2019.