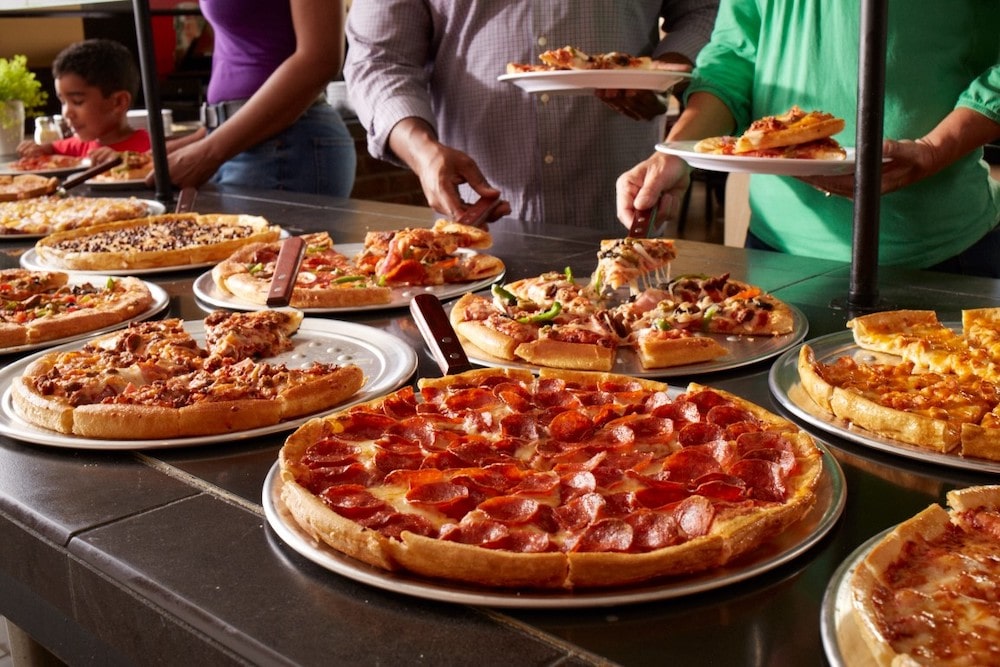 Pizza Inn has long specialized in buffet service, but the company added a "contactless buffet-to-go" offering after the pandemic hit.

In an unusual political move, Pizza Inn issued a press release on Tuesday in which it stated that “widespread voter fraud” in the presidential election was “probable” and called for a “10-day audit of the vote” to be conducted before Inauguration Day.

The press release, which had been posted on PR Newswire, has apparently been removed, but it can still be viewed on Yahoo News and on Pizza Inn’s Facebook page.

“Pizza Inn is not advocating to overturn the election, nor do we think hastily certifying the results in Congress tomorrow is appropriate,” the release stated. “We are simply saying that since we don’t know what happened, the prudent course of action is to conduct a 10-day audit of the vote to make certain that the man we inaugurate as President of the United States on January 20 is the rightful winner.”

“We fully understand the risks of wading into such heated political waters, but we believe some things—such as America’s election integrity—are too important to stand by silently,” the release continued.

President Trump’s campaign has mounted dozens of legal challenges to November’s election results, nearly all of which were rejected by state and federal courts, including judges appointed by the president himself and other past Republican presidents. Additionally, Republican governors and secretaries of state in Georgia and Arizona have said they found no evidence of widespread voter fraud and that the elections were conducted in accordance with state and federal laws. Prior to resigning from office, U.S. Attorney General Bill Barr made a similar statement.

Pizza Inn also called for “commonsense changes to our federal election laws,” including voter ID requirements, the elimination of mail-in voting and electronic voting machines, and restrictions on absentee ballots.

In the press release, Brandon Solano, CEO of Rave Restaurant Group (owner of Pizza Inn), said the “current election system is dangerous for our democracy, breeding uncertainty, unrest and, in some extreme cases, political violence. This has to stop.”

“We will no doubt be vilified by some for these reasonable and responsible suggestions,” Solano added. “We may even be accused of supporting voter suppression for recommending solutions that we believe would advance the cause of election integrity. But pursuing this worthy, non-partisan goal is not suppression; it’s democracy in action.”

Headquartered in Dallas, Pizza Inn has 146 locations in 14 states, most of them in southern and southwestern states. President Trump carried all but three of those states in the election.

Despite objections from some GOP senators and House members, Congress certified Biden as the winner of the election early in the morning of January 7. 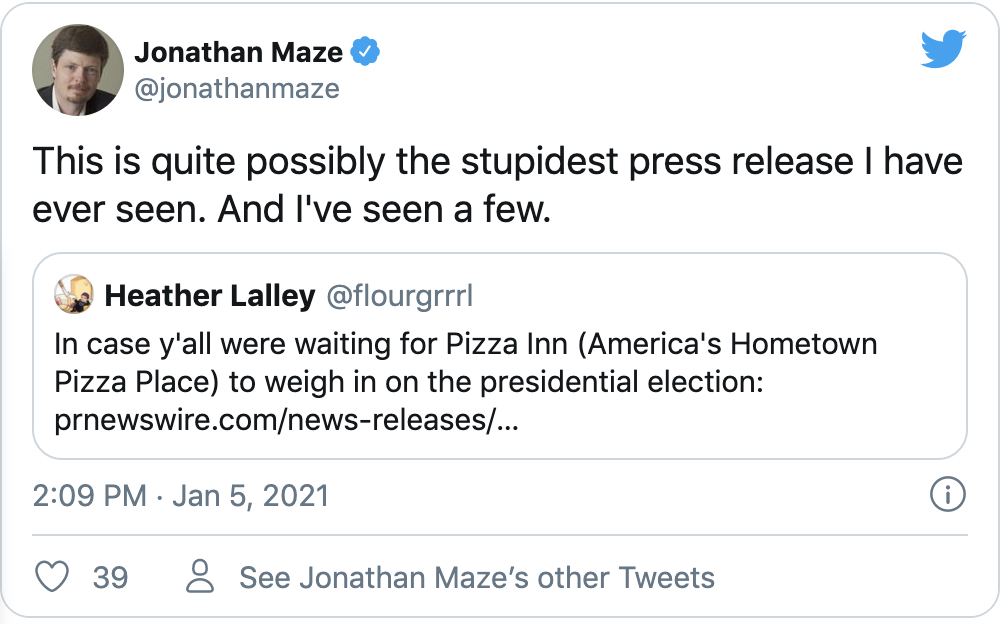 In a tweet on Tuesday afternoon, Jonathan Maze, editor-in-chief of Restaurant Business, said the press release was “quite possibly the stupidest” one he had ever seen. Reaction to the press release on Pizza Inn’s Facebook page was predictably mixed, with many saying they would not patronize the chain any more while others supported the company’s stand.

Rave owns the Pizza Inn and Pie Five chains, but both companies have been struggling. In November, Restaurant Business reported that Pizza Inn’s same-store sales fell 22 percent in its 2020-21 first quarter, which ended September 27, while Pie Five’s same-store sales dropped 23 percent. Both chains also lost stores over the previous year. Pizza Inn’s total number of locations dropped from 155 to 146 as of late September 2020 while Pie Five’s store count fell from 58 to 39 during the same period. Rave saw its overall 1Q revenue plummet by more than 65 percent year-over year. In its previous quarter, Rave furloughed employees, reduced base salaries by 20 percent and cut back on other expenses.

Due to the coronavirus pandemic, many pizza consumers began shying away from the type of buffet service that Pizza Inn specializes in, so the chain introduced its “contactless buffet-to-go” and curbside pickup last year.