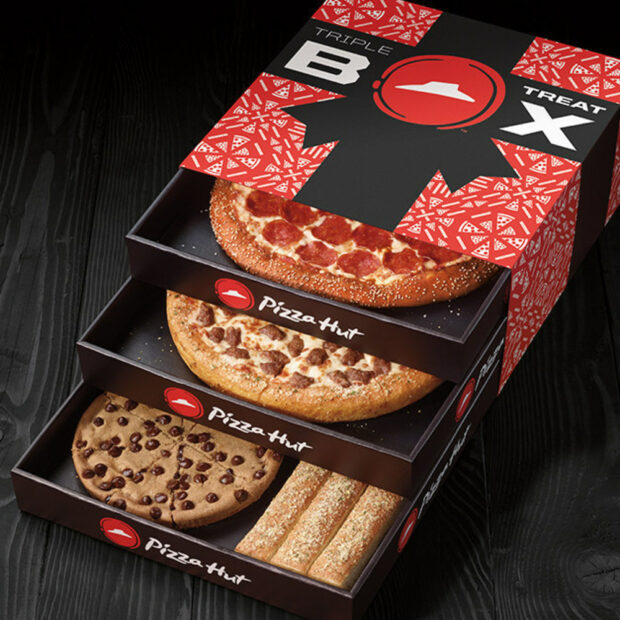 The Triple Treat Box provides three courses in one festive package: two medium one-topping pies, five breadsticks and 10 Cinnabon Mini Rolls. It’s another example of how the Plano, Texas-based megachain is focusing on value for cash-strapped customers in the COVID-19 era. It’s also a step up from Pizza Hut’s Double It Box special introduced back in August. That value deal offered two medium-sized one-topping pizzas in the same box for $12.99.

“The Triple Treat Box is the gift that keeps on giving this holiday,” said George Felix, the chain’s chief marketing officer, in a blog announcing the new offering. “We know the holiday season can get busy, so let Pizza Hut take care of dinner so you can focus on spending time with the people you love.”

The Triple Treat Box sells for $20.99 (or a little more if you prefer the Original Pan crust) and will be available for a limited time at traditional Pizza Hut locations nationwide.

Although Pizza Hut is now the second-largest pizza chain behind Domino’s in terms of sales, their marketing department continues to innovate and create media buzz. In October, Pizza Hut unveiled a value deal called the Tastemaker, which included a free 680-day calendar featuring brand-themed original artwork “inspired by the funniest, most absurd and overused calendar tropes…reimagined through the eyes of a pizza lover.”

In November, the chain followed up with a limited-edition, 15-pound weighted blanket that looked like a pepperoni pizza.

On the culinary side, Pizza Hut beat Domino’s and Papa John’s in the race to add plant-based proteins to its menu. In November, the chain rolled out a pair of pizzas topped with meat-free Italian sausage from Beyond Meat.