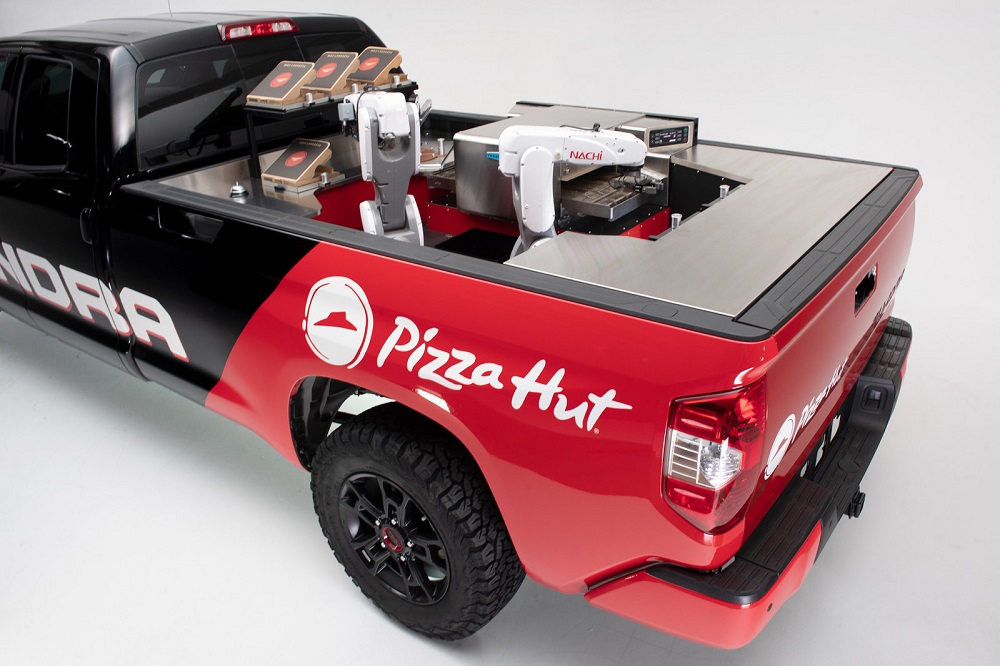 Kids and dogs love to ride in the back of pick-up trucks, but what about pizza-making robots?

Pizza Hut aims to find out as it tests a pizza factory on wheels, complete with two robots and a high-speed, ventless conveyor oven loaded into the bed of a rebuilt Toyota Tundra SR5. The chain unveiled the prototype today at the Specialty Equipment Market Association’s annual automobile show in Las Vegas.

Called the Tundra PIE Pro, the set-up borrows an idea from Zume Pizza, a California pizza company that uses robots in the kitchen to par-bake pizzas as well as computerized ovens in the delivery trucks to finish the bake en route to the customers’ doorstep. At present, the Tundra PIE Pro prototype is an open-air system, with the equipment and pies sitting in the bed of the truck, increasing the likelihood of sauce-splattered windshields and flying pies on the freeway. But like we said, it’s just a test, folks—no reason to panic.

The automated process can bake pies in six to seven minutes, Pizza Hut says, ensuring that customers receive their pies hot and fresh from the oven. The pizzas are preassembled in a restaurant kitchen and stored in a mini-refrigerator on-board the truck. One robot arm pulls the pie out of the fridge and places it onto the conveyor oven. When the pizza emerges, fully baked, on the other side of the oven, a second robot arm transfers it to a cutting board, slices it into six pieces, places it in a pizza box and closes the box.

“We’re bringing the oven closer to the consumer’s door—nobody is doing that,” Nicolas Burquier, Pizza Hut’s chief customer and operations officer in the U.S., told the Washington Post. “We are pretty obsessed with improving the customer experience. The more we can get closer to their homes or the point of delivery, the better and hotter the product will be.”

However, Zume Pizza is way ahead of the chain in terms of on-the-go pizza baking. In Zume’s delivery model, predictive software forecasts which types of pizzas will most likely be ordered on any given day. A team of humans and robots prep and par-bake the pies in Zume’s kitchen each morning before loading them onto large delivery trucks equipped with refrigerators and 28 computer-operated ovens (or 56 ovens for catering trucks). A second algorithm predicts the service areas where orders are most likely to come from. The truck drivers cruise around in these areas and, when orders start coming in, human employees transfer the par-baked pies to the ovens for the finishing bake. The process allows the delivery drivers to get pizzas in customers’ hands while they’re still hot and fresh.

Pizza Hut’s automated system is a partnership with Toyota Motor Corp. It’s all part of Pizza Hut’s overall strategy of speeding up pizza delivery and improving customer service. Pizza Hut and Toyota are also working on developing a self-driving delivery vehicle as part of their e-Palette Alliance. Meanwhile, Domino’s and Ford Motor Company last year started testing driverless pizza delivery cars in Ann Arbor, Michigan, although these cars are not equipped with pizza ovens or refrigeration.