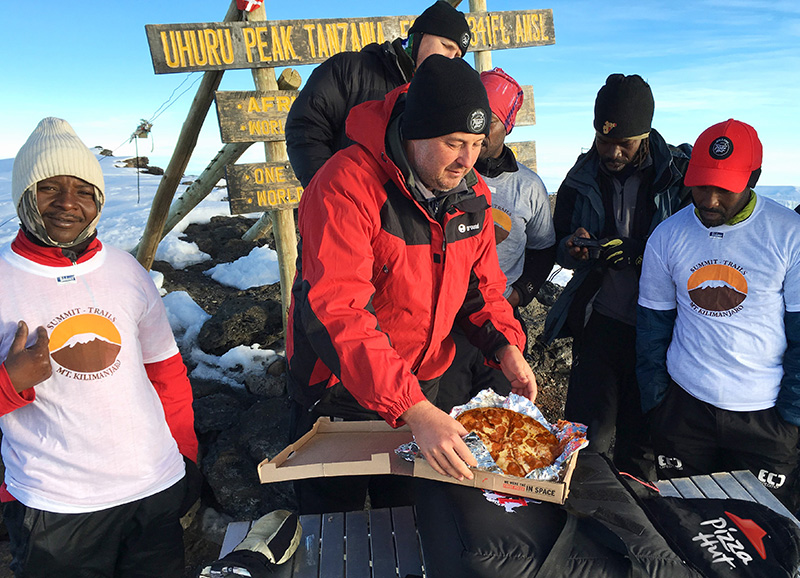 Pizza Hut has delivered pizza to the International Space Station, so getting a pie to the top of Mount Kilimanjaro must have been a cinch. Even so, the delivery set a new Guinness World Record for the highest-altitude pizza delivery on land, scaling a height of 19,341 feet.

OK, first things first: What kind of pizza was it? Well, nothing fancy—just a pepperoni and cheese. But a team of five mountaineers—including Pizza Hut Africa General Manager Randall Blackford, several company employees and local guides—trekked four days to deliver it, hiking up the mountain on foot and ending up in frozen terrain surrounded by ice and snow. Pizza Hut designed a special pizza box backpack for the delivery and kept the pie warm with a battery-powered heater.

The journey marked an important milestone for the company—Pizza Hut had just opened a store in its 100th country. “It was just amazing when we found out we could be the 100th country to launch a Pizza Hut,” said Vikram Desai, an executive with Pizza Hut Tanzania. “It was a race between (Tanzania and) other countries.”

The promotion also raised money for improvements at the local Msasani Primary School in Dar Es Salaam, Tanzania, where the new Pizza Hut store will open.

“We are thrilled to bring Pizza Hut to Tanzania and believe there is no better way to celebrate our 100th country milestone than by setting a Guinness World Records title for the highest pizza delivery on land to Mt. Kilimanjaro,” said Milind Pant, president of Pizza Hut International.