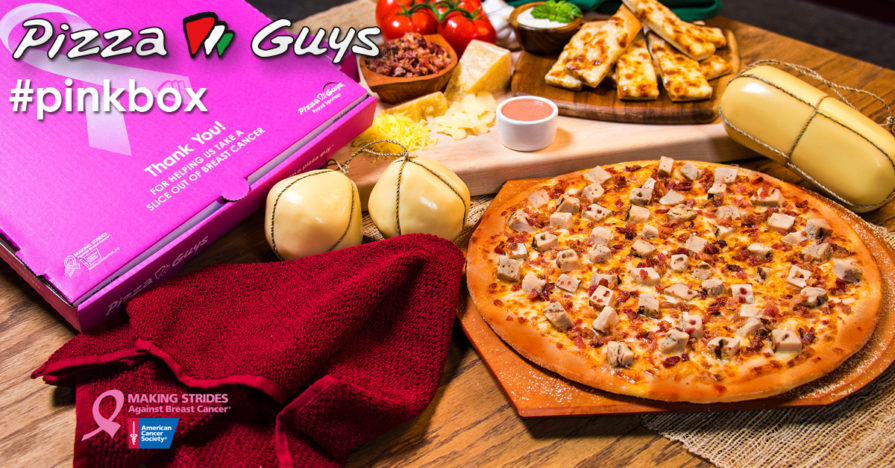 Customers who purchase a Large Pizza in October will notice that the box color is changed to pink, theuniversally recognized color for breast cancer awareness. Pizza Guys would like customers to get socialwith this campaign and use #PinkBox on Instagram and Twitter with their orders. There will also be fanparticipation prizes on their Facebook page athttp://facebook.com/realpizzarealvalue during the month ofOctober.

Pizza Guys’ Vice President of Operations, Mike Morgan, said, “Not only are we doing a fundraiser, but weare also committed to educating our customers about breast cancer. Cancer has touched the lives of manyof our employees and their families. This program allows our employees and customers to get in the fightagainst breast cancer. We are very excited to help raise funds for research and increase awareness.”

Pizza Guys will donate a portion of proceeds of every large pizza sold. In addition, one dollar will bedonated from each purchase of their promotion A Slice of Hope” that features a Large Two Topping Pizzawith a Special Pink Sauce (Classic Tomato Sauce mixed with Creamy Garlic Sauce) and a Regular GarlicBread for $20.00 (Offer 2060. Customers also have the opportunity to donate directly to ACS starting at onedollar increments in store, over the phone, or online when they order.

It is Pizza Guys first time partnering with ACS. Kim Bui, HR Director said, “We approached ACS becausethey are a reputable organization involved in the communities that they serve. ACS was very enthusiasticand helpful throughout the entire campaign planning process. They are true professionals and we lookforward to a successful October campaign, and many more in our future.”

The American Cancer Society is a nationwide, community-based voluntary health organization dedicated toeliminating cancer as a major health problem. Headquartered in Atlanta, Georgia, ACS has regional andlocal offices throughout the country thatsupport 11 geographical Divisions and ensure that they have apresence in every community. For more than 100 years, ACS has worked relentlessly to save lives andcreate a world with less cancer and more birthdays. Together with millions of their supporters worldwide,they help people stay well, help people get well, find cures, and fight back against cancer. For more
information on ACS, please go to their website http://cancer.org.

Pizza Guys was started in 1986 by Shahpour Nejad and Reza Kalantari. Their goal was to create a pizzadedicated to quality and value while combining the fresh California flavor. They started franchising PizzaGuys in 1994. Pizza Guys currently has over 60 locations throughout California, Nevada and Oregon.