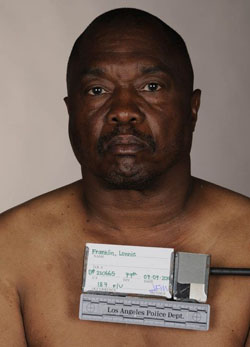 Lonnie Franklin Jr., is the man police suspect is the “Grim Sleeper,” a Los Angeles serial killer who has been tied to the killings of at least nine women and one young girl from 1985-2007 by a slice of pizza.. The name “Grim Sleeper” reflects the break the killer took in the murder spree from 1988-2002.

According to the National Enquirer, the “Grim Sleeper's” trial began last week in California and introduced multiple shadowy photographs and videotapes of women and a DNA sample from a pizza slice. An undercover cop dressed as a waiter in Franklin's favorite pizza place back in 2010 recovered the remnant. The sample matched Franklin's DNA. Franklin says he didn’t kill anyone, but when authorities searched his home they found numerous hours of video of the unidentified women. Police believe as many as 180 of the photographed women could have been “Grim Sleeper” victims.