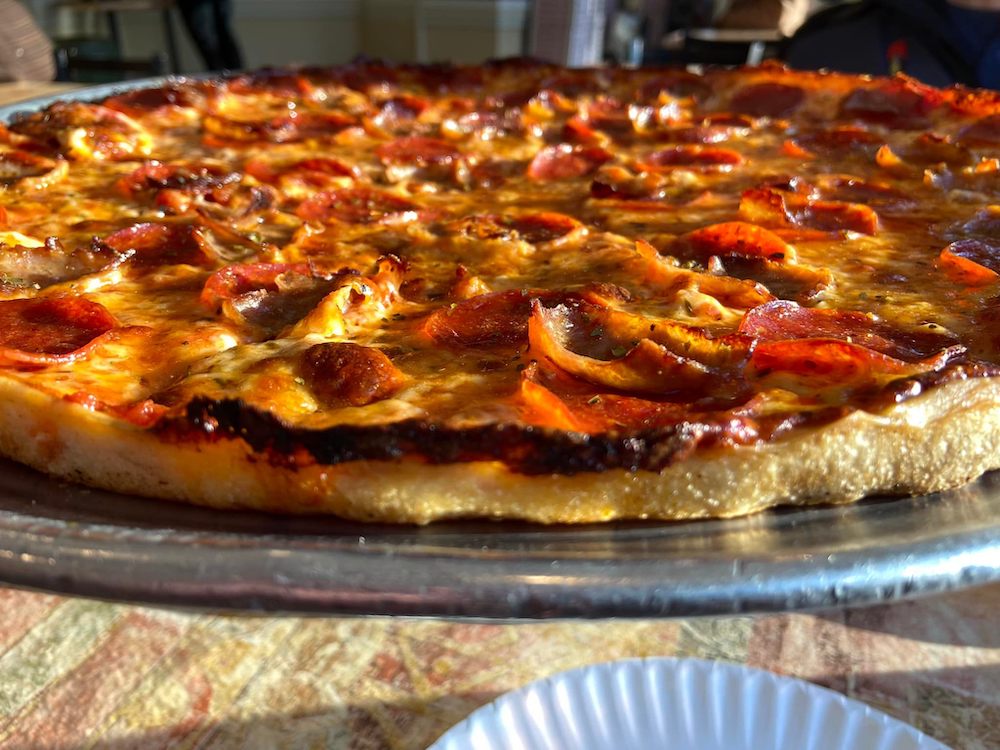 By day, 60-year old New Jersey native Guy Madsen makes lucrative tech deals, enough to be able to own a house in the northern part of the state, as well as a beach home in Seaside Heights.

But at night, he often finds himself thinking of pizza. “I’ve always been a pizza guy,” says Madsen, whose family has been in the restaurant business since he was born. “It’s a passion. I don’t find many people who don’t like pizza. It unites us. In a world of division, it’s good to have something that unites us throughout the world.”

And while New Haven, Connecticut, is considered by many the home of the best pizza in the United States (and possibly the world), with New York City getting a healthy share of supporters too, there are plenty of Jersey folks who think the 2,000 pizza restaurants located within their borders are among the country’s best too. For starters, there are so many styles to choose from. “Jersey is like the Napa Valley of pizza with its football pie,” Madsen says. “It’s a little on the thinner side, not overly well done and doesn’t have too much sauce. If north Jersey is Napa Valley Central, the center of the state is like Sonoma Valley, and the south is all different, where tomato pies dominate.”

Traversing the state for work often meant Madsen was eating in a lot of these restaurants, which, he observed, are often staffed by passionate descendants of Italian immigrants and a curious lack of female pizza makers. Yet he was frustrated that he couldn’t share his great discoveries amongst a group of like-minded pizza lovers. So two years ago, right as the pandemic was beginning, he decided to create a public group on Facebook, calling it Jersey Pizza Joints. It was designed to be a place where fellow pizza lovers in New Jersey could talk about great meals they’ve had, share pictures and compare notes. By November of that year, Federico Castellucio, best known as the character Furio on the TV series The Sopranos, became the 2,000th subscriber.

Though Madsen was surprised and thrilled that his group was growing, he felt the need to do even more. “Now that you have an audience, how do you engage them?” he asked. “How do you identify the great places? We’re not Yelp. This isn’t criticism. This is praise. In today’s age, it’s not just about the food, it’s the why behind the pie.”

Thus, the concept of the first annual Pizza Bowl was born. After conducting a series of informal polls online, Madsen divided the state into four regions—North, Central, South and Jersey Shore—and asked the top four vote-getters from each region to have a public bakeoff in a venue with live judging. “The winner was a place in Verona, New Jersey, called The Pizza Terminal,” says Madsen. “A U.S. congressman gave them a declaration as a result of it, and their business significantly grew.”

This year, Madsen has even more ambitious plans—he will hold Pizza Bowl 2 on Saturday, February 5, at Redd’s Biergarten in Carlstadt, New Jersey, within shouting distance of the Met Life Stadium, which played host to Super Bowl XLVIII. Alongside 180 celebrity and non-celebrity judges, a live band, DJs, a theme tune and swag bags amidst a COVID-free atmosphere (entrants will have to show proof of vaccination), 32 finalists (eight from each region) will create their best pizza and meatballs in the hope of being declared the 2022 New Jersey Pizza Bowl winner. “We’re going to celebrate the true celebrities of this ugly-ass time—the mom-and-pop small businesses who kept us all fed when everything else was pretty much closed,” Madsen says. ‘’I’m pleased that we can give them the attention.”

While the event is already sold out, Madsen plans to livestream it to the world on YouTube. He also intends to donate 20% of all ticket sales to Tunnel To Towers, a foundation formed in the aftermath of 9/11 to help first responders and the military. “We hope to raise $20,000 for them, and we’ll also have four area mayors showing up, both red and blue, because everybody loves pizza,” says Madsen.

If all goes well, Madsen has an even bigger dream. After all, his little group site on Facebook now has more than 53,000 subscribers in over 100 countries. These days, the posts and pictures are uploaded so fast and furiously that there are now five daily handlers observing it all, making sure that pizza and positivity are the main topics. “I see us in Atlantic City one day, with a celebration of Jersey pizza where they roll in pizza machines for the weekend and all the vendors come in, and I can see Pizza Bowl being a big deal,” Madsen says. “But I need to make this year epic and ensure that it runs well.”

No doubt, New Jersey’s ravenous pizza lovers will be rooting for him.

This year, in a bid to create more interest in New Jersey’s pizzas, Guy Madsen will induct the Seaside Heights-based pizzeria Maruca’s into the inaugural Pizza Bowl “Hall of Fame.”

For those who want to be on the “inside track,” he also offers his top tips as to who could emerge as this year’s Pizza Bowl 2 champion based on his standard that a plain cheese pizza with tomato sauce is the best.

Patsy’s, Paterson, New Jersey: “It’s throwback pizza, the kind that your grandfather would have eaten, created in a cool, authentic environment that’s like a movie set.”

Calabria, Livingston, New Jersey: “Two brothers opened up in the 1970s. A wonderful family with amazing pizza. They’re in the discussion for the Hall of Fame.”

Riccardos, Sewell, New Jersey: “It’s the hardest place to find in South Jersey, but I’ve been blown away by their pizza. Having said that, there’s a group below these three that could easily pull it out.”