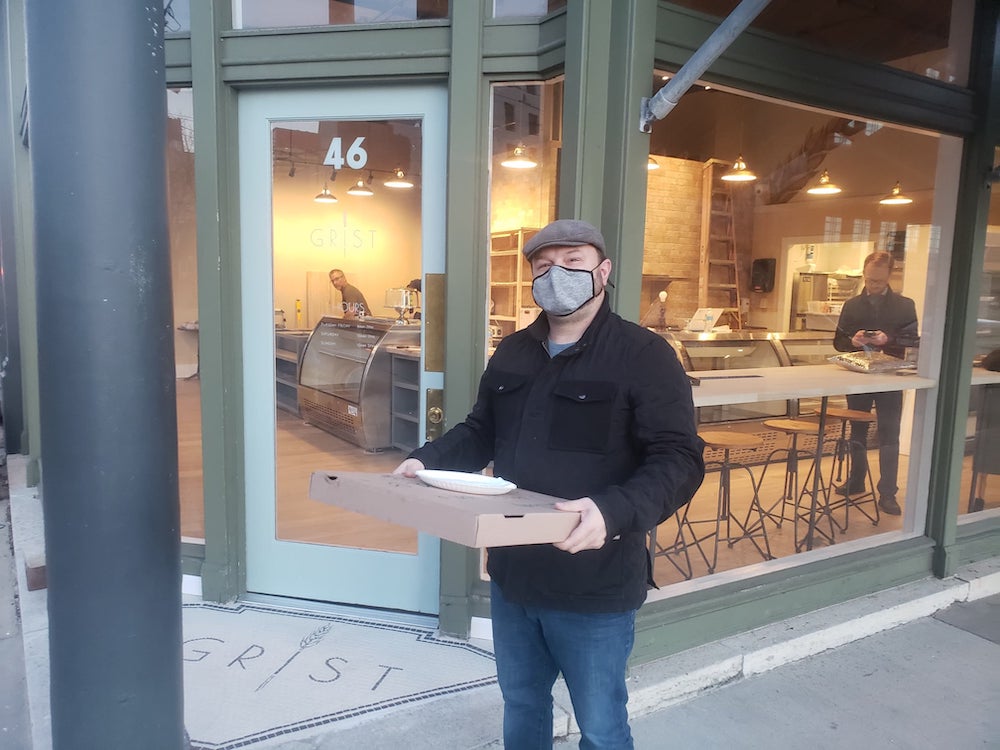 The Pizza Bandit has been delivering donated pies to businesses around the Dayton area.

It seems like everyone’s eating pizza at work these days in Dayton, Ohio, thanks to anonymous donors and The Pizza Bandit, a food truck that operates Wednesdays through Saturdays and provides delivery as well as carryout.

“Someone on the internet bought you lovely humans a pizza!” read a note on a pizza box delivered for free to Meadowlark, a restaurant in Washington Twp. last week. The pizza was donated anonymously, along with 71 more pies that have been dispatched to businesses around Dayton in recent days.

The first donation, ordered by phone, went to The Barrel House on January 13, and a second unknown caller sent a free pizza the next day to Omega Music.

The Pizza Bandit owners were so tickled at the prospect of brightening workers’ days with free pizza, they offered to match every donated pie with another one to be sent to a different business.

“All of these anonymous pizza antics got me to thinkin’, and now I wanna have a city-wide pizza party,” one of the pizzeria owner’s wrote on a January 15 Facebook post. “Through tomorrow, if you purchase a pizza for a local business (anonymously or not), we’ll MATCH it and hook up another local business with a pizza.”

That post earned 185 reactions and 111 shares, amping up the interest throughout the community and starting a trend that has continued through this week. With so much positive reaction, dozens of employees at businesses around Dayton have feasted on free pies.

Most of the recipient businesses have been other eating and drinking spots, such as Branch & Bone Artisan Ales, The Neon, Wheat Penny Oven & Bar, Toxic Brew Company and Lucky’s Taproom & Eatery, to name a few. Other non-restaurant businesses have made the list, though, including Rebel Rebel Tattoo, Skeleton Dust Record, LUNA Gifts & Botanicals and others.

The promotion has been covered by local media as well as the Fox News website. “Someone was trying to support us and another business, and then for us to be able to support even more businesses by matching pizzas is a really good feeling,” Brian Johnson, a partner in The Pizza Bandit, told WHIO.

The Pizza Bandit touts every giveaway with Facebook posts and has taken advantage of the situation to promote its specialty pizzas, which are often among the donated pies. A recent favorite: The Deconstructed Birria Taco Pizza, an 18-inch pie with marinated beef rib and sirloin stew with cinnamon and tomato, a mozzarella and provolone blend, cotija cheese, diced white onions, cilantro and stew-dipped tortillas.

In a story appearing on Dayton.com, Johnson said every business that has received a free pizza “has been ecstatic.”

He noted that the pizzeria couldn’t afford to keep matching all the donations “but may introduce a pop-up day or special occasion where we’ll match again in the future.”