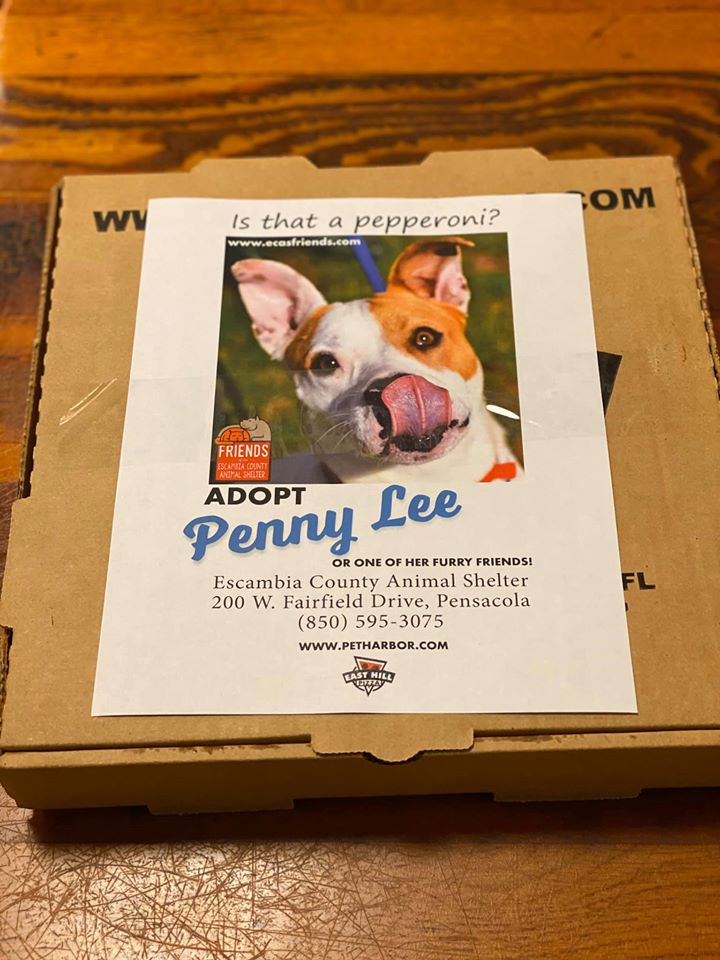 Inspired by a collaboration between a pizzeria and an animal shelter in New York, pizzerias in several southern states have formed their own partnerships with shelters and rescue organizations to help animals find their forever homes.

In Pensacola, Florida, East Hill Pizza, Sky’s Pizza Pie and a Mellow Mushroom location have started attaching photos of adoptable dogs and cats to their pizza boxes, pointing customers to the Escambia County Animal Shelter to find a new best friend with whom to share their next pie.

“Someone might see [a shelter puppy named] Penny Lee and think, ‘I really want a canine companion’ and go adopt a different dog, so it’s just an opportunity to share the beautiful animals that are available at the shelter,” Kim Rainer, a member of Friends of the Escambia County Animal Shelter, told WEAR-TV in Pensacola.

East Hill Pizza sends out about 200 pizza boxes a week, Rainer said. “Well, that’s 200 flyers that are being sent out in the community talking about our animals.”

“It’s great to give back to the community, not only to help the community itself [but] also help the pets … that don’t have a voice,” Darlyne Zoltak, owner of East Hill Pizza, told WEAR-TV.

Rainer said the partnership was inspired by a similar one between a Just Pizza & Wings franchise in Amherst, New York, and the Niagara Society for the Prevention of Cruelty to Animals.

Meanwhile, Lorenzo’s Pizzeria has taken up the same cause in Charlotte, North Carolina. Owner Denise Simonelli told WCNC she’s working with several local rescue organizations to help animals get adopted. For starters, her boxes feature only rescue dogs. “They gave us those animals that were in great dire need of getting homes right away,” Simonelli told the TV station. “So starting off, we have about six dogs right now, but we’ll have plenty of animals coming forward.”

Lorenzo’s also offers a $25 gift card to anyone who adopts a pet featured on its boxes. “The community is loving it,” she added.

Even Papa John’s has gotten in on the act. A Papa John’s store in Corpus Christi, Texas, will feature a different adoptable dog on its pizza boxes every week, according to KIII-TV.