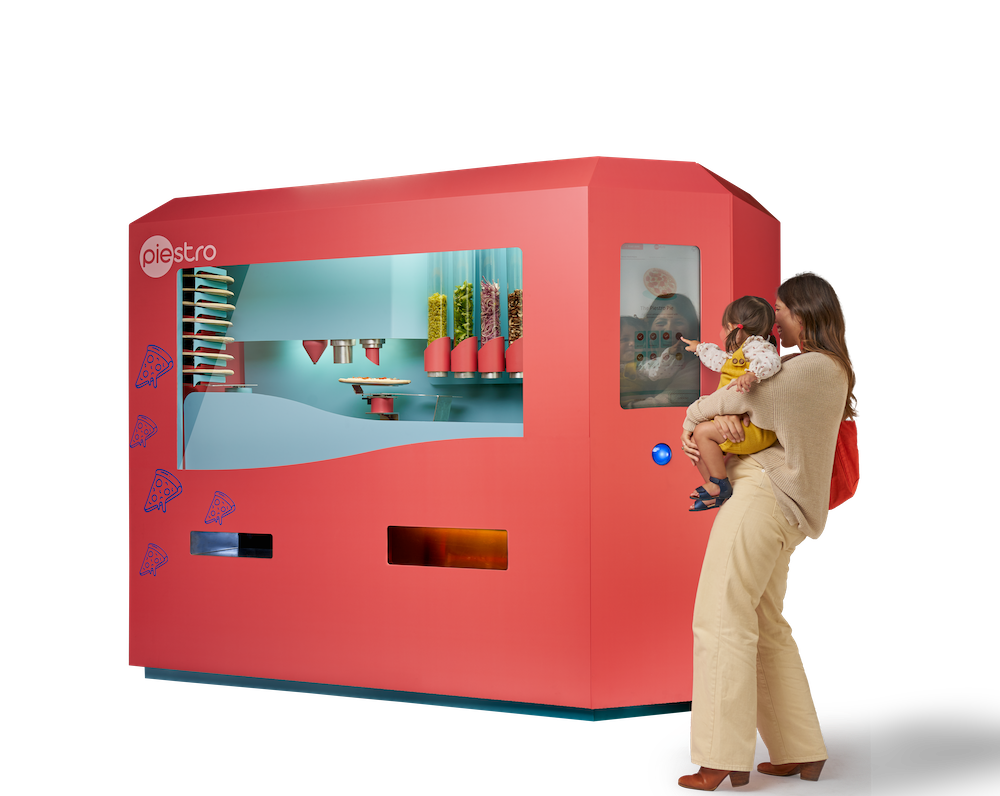 Related: Study finds robots will replace humans in restaurants sooner rather than later

Piestro announced the partnership with 800 Degrees Pizza today. The chain first opened in 2012 in Southern California and has locations in California, Ohio, North Carolina and Florida as well as Singapore and Japan. 800 Degrees Pizza will offer consumers a fully automated culinary experience with a custom pizza recipe designed for Piestro’s unique cooking technology.

Chef Carron has always taken an imaginative approach to pizza making. When he launched his first 800 Degrees Pizza location, he set out to pair fresh, great-tasting ingredients with a woodfired oven to produce artisan pizzas in just 90 seconds. The company’s success continued with national and international expansion into 2020. But, as the pandemic hit, the entire restaurant industry faced new customer service constraints and the acute challenge of keeping up with the exploding demand for delivery-based dining.

The new dynamics of delivery/takeout culture and increased consumer pressure for more convenient food choices has put a strain on restaurants’ access to labor and their ability to maintain high levels of quality and consistency. Even with 800 Degrees Pizza’s impressive cooking speed, Carron and his team believed they needed to do more to future-proof the brand and maintain the brand’s standards. Carron saw the promise of automation when his longtime friend, Massimo Noja De Marco, reached out to discuss his latest venture—the automated pizzeria, Piestro.

“When Massimo and I first connected about Piestro’s technology, I saw both the immediate and long-term impact automation could have on our business,” Carron said. “Knowing Massimo’s exceptional background and the emphasis he places on quality and consistency in his machines, I knew this was a partnership we needed to make happen. We immediately began the process of developing recipes using the same imported, fresh and flavorful ingredients that made 800 Degrees Pizza so successful, and we were off to the races.”

The partnership will bring a completely new version of the 800 Degrees Pizza brand to high-traffic, easy-to-access locations through “800 Degrees by Piestro” machines. The partnership is kicking off with a projected order volume of 3,600 units to be produced and sold by Piestro over five years.

“This partnership is a clear indicator of the interest and potential for automation within the pizza industry,” said De Marco, CEO of Piestro. “I’ve known Chef Carron for years, and he exemplifies the spirit of operators dedicated to their craft, committed to delivering customers an unforgettable dining experience. The contactless cooking capabilities, fresh taste, speed and consistency that our automation and breakthrough oven technology bring are perfectly aligned with the values of 800 Degrees Pizza to provide customers an exceptional culinary experience. We can’t wait to give customers everywhere access to an international pizza brand with a robotic twist.”

In October 2020, Piestro announced a partnership with Kiwibot, a robotics company that specializes in contactless delivery of food and goods. Kiwibot’s delivery robots are now a familiar sight on college campuses like the University of California-Berkeley and the University of Denver. At the time, De Marco said Piestro’s units could be integrated with a loading mechanism designed for Kiwibots, allowing the bots to collect the pizzas from the machines and deliver them to customers.

In another key move, Piestro announced in March 2021 that it had also partnered with PopID, a facial recognition payment company. The technology lets consumers pay with their face at Piestro’s automated pizzeria locations and on mobile devices.

Additionally, Piestro recently announced a partnership with Carbone Restaurant Group to expand the footprint of Fast Fired, a fast-growing pizza franchise in Canada. That partnership, valued at approximately $50 million, represents a critical prong in Fast Fired’s scale plans, according to Piestro. The company will actively market “Powered by Piestro” machines to franchisees, with the goal of growing its presence through up to 500 units deployed across Canada. Piestro is collaborating with CRG to replicate FAST FIRED recipes and ingredients to ensure the resulting pizzas are 100% authentic.

Piestro continues to gain traction with investors in its crowdfunding campaign, which is currently underway on StartEngine. The platform gives more everyday investors an opportunity to capitalize on the $46.3 billion U.S. pizza market and be a part of shaping the future of the industry by investing in intelligent automation. The campaign is set to end September 30.

Piestro is backed by experts in the food automation space. Its lead investor, Wavemaker Partners, is a global venture capital fund with over $550 million in assets under management, and its studio, Wavemaker Labs, focuses directly on automation. Piestro has a seasoned team made up of executives and founders from Miso Robotics, Kitchen United, SBE Entertainment Group, Graze, and Wolfgang Puck.