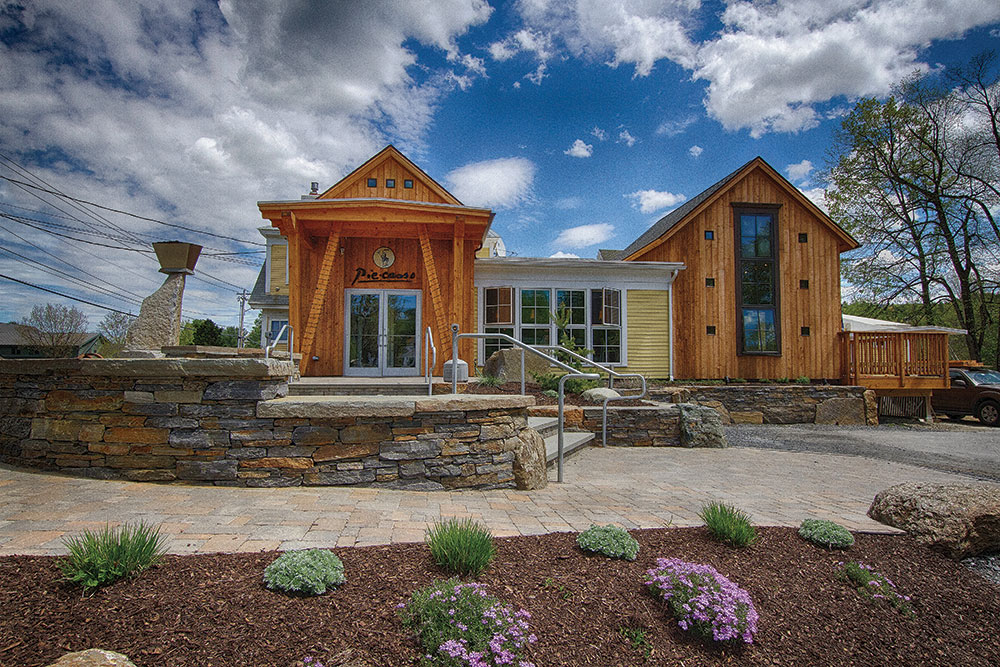 Eduardo Rovetto may be the hardest-working ski bum in the pizza business. When he isn’t carving turns down a winding peak or shredding the slopes on a snowboard, Rovetto, 39, runs a single-unit pizzeria in tiny Stowe, Vermont, that has earned a national reputation. Tucked away between the Green Mountains and the Worcester Range, the 7,000-square-foot Piecasso Pizzeria & Lounge (piecasso.com) sports a full-service bar, seating for 155 customers, 12 craft beer taps, a game room for kids, and a menu that has earned kudos from Travel + Leisure, among other admirers in the media.

Somehow, Rovetto also finds time to develop new pizzeria concepts with his cousins for Rovetto Brothers International Restaurant Group (see the sidebar “Borrowing From the Big Chains”) while raising three young children with his wife, Sarah, and even squeezing in some golf on sunny afternoons.

OK, so he’s not really a ski bum—more like king of the mountain in his snow-capped ski resort community. Rovetto has combined his two passions—pizza and snow sports—seamlessly in Piecasso, and the buoyant tone in his voice tells you he’s loving every minute of it.
“This is my dream,” he says. “After we finished our last renovation of the building, I would stare in awe every time I drove by. I couldn’t believe the place was mine.”

A Family of Pizza Makers

Piecasso isn’t Rovetto’s first dough slinging rodeo by any stretch. Growing up, he worked for his parents, Sicilian immigrants Quinto and Rosa, in their restaurant, Quinto’s Pizza, in Little Falls, New York, and later at a second Quinto’s in Central Square, New York. “I’d go there every day after school,” Rovetto recalls. “Folding boxes was my first job. I learned every facet of the business when I was young.”

Rovetto’s first cousins—who are more like brothers to him—followed in their uncle’s footsteps, and pizzerias using Quinto’s recipes began sprouting up along the East Coast. Meanwhile, Rovetto earned a photography degree in college and, for a while anyway, lived a carefree life on the slopes of Vermont and Colorado in the winters while making pies in the summertime at a cousin’s beachside shop, Cosmo’s Pizzeria, in North Carolina. “I’d become a ski/beach bum,” he admits. “I didn’t really want a lot of responsibility.”

But Rovetto’s mother questioned his carefree lifestyle and soon pushed him to make a choice: put his photography degree to work or start his own pizzeria. Averse to the starving-artist lifestyle, he partnered with his parents in the first Pizza Jerks (pizzajerks.com) store in Atlantic Beach, North Carolina, and opened a second one in Syracuse. Then a visit with his cousin Carlo Rovetto, operator of the Positive Pie (positivepie.com) chain in Vermont, changed everything. “Driving through Stowe during a ski trip [in 2000], I thought, ‘Oh, my God, this is it—this is where I want to live,’” Rovetto says. “It was everything I wanted in a town. I sat awake in bed for a week, figuring out how I could move to Vermont.”

Two months later, he’d shut down the Atlantic Beach store, hauled all of the equipment to Stowe and opened Piecasso in an 800-square-foot space.

With only four tables and seating for 15, the first incarnation of Piecasso focused mostly on carryout. Then, in 2006, Rovetto moved his operation into a much larger building across the street. Over the next six years, he embarked on a series of renovations to create the pizzeria of his dreams: a flowing stone patio, local artisan woodwork, vivacious colors, handcrafted aluminum pieces on the bar. The bar itself, spacious, curvy and brilliantly lit, became a focal point of the restaurant. Lively music, such as reggae, funk and jazz, sets a festive mood, and the employees are trained to bring fun-loving energy to every encounter.

Guests can enjoy quiet conversation in the main dining room or sip a Pomegranate Martini in the bar area. Near the bar, an arcade room—with classics like Pac Man, Galaga and racecar games—keeps kiddies entertained. “I wanted to accommodate all walks of life while focusing on the local community,” Rovetto says. “A couple on a date will come to Piecasso because it’s a hip, cool place with the right music and lighting. But a family with kids will feel comfortable here, too. The arcade keeps kids occupied when there’s a wait or when parents just want to take a break and drink a cocktail in peace.”

Locally and regionally grown ingredients figure prominently in the recipes, thanks to a relationship with the Vermont Fresh Network, a statewide co-op of growers, and Pete’s Greens, an organic vegetable farm in Craftsbury, Vermont. “To me, local sourcing is just common sense,” Rovetto says. “Doesn’t it make sense to support your local farmer and his family down the road versus buying bulk tomatoes from Mexico? You’re investing in your community.”

Although the pies are hardly pricey—ranging between $11 and $22—Rovetto believes in charging what his food is worth. “We food-cost every item, and we charge accordingly,” he says. “You do pay a little more—maybe 15% or 20% more. But our pizza is of a higher standard than anything from the big three chains. You’ll always have a demographic that doesn’t have a lot of money and wants to feed their families as inexpensively as possible, and that’s OK. But I also think that, everywhere you turn, there’s a demographic that’s willing to pay more for quality.”

Customers will also pay more for top-quality craft beers, another Piecasso specialty. The restaurant is located within just 20 miles of several legendary breweries, including The Alchemist, famed for its Heady Topper, an American double IPA, and Hill Farmstead, named the Best Brewery in the World by RateBeer.com. “We rely heavily on craft brews,” Rovetto says. “People will often come in just for the beer because we’ll have a special one-off beer from a certain brewery. It has an amazing cult following.”

Piecasso has its own marketing director, Amanda Bovi, and partners with area businesses to create a full slate of activities that transform slow nights into moneymakers. Prior to ski season, the restaurant targets locals with Movie Nights spotlighting snow sports. “Local ski and snowboard shops sponsor the movies, and the community has rallied around it,” Rovetto says. “The crowd is probably between 20 and 30 people, but that’s on a slow Thursday night in the off-season when we would normally close up at 9:00. Instead, we’ve got 30 people still drinking and listening to music after the movie is over. We do the same thing with mountain biking in the spring. Mountain bike shops sponsor the night and bring their fans in, getting them pumped up for outdoor activities, because that’s what this community revolves around.”

Piecasso recently hosted its fourth annual golf tournament for locals as well. The four-man scramble drew 15 teams, mostly employees in the hospitality business, who then headed back at the end of the day for pies and brews at Piecasso. Trivia Nights are another big draw, bringing in crowds on Wednesdays for competition and prizes from distributors and local merchants.

Piecasso maintains a very active Facebook page, with nearly 8,000 likes, plus a Twitter account with 349 followers and an Instagram page with 181 followers. Additionally, Rovetto and general manager George Spraker closely monitor sites such as Yelp, Trip Advisor and Google Reviews. “We use Google Alerts so that anytime we’re mentioned on the Web, we’ll get an email about it,” Rovetto says. “This has been invaluable. When we get a review on Yelp, we know about it. If someone gives us a 1-star review, I call George and say, ‘Start digging and find out what we did wrong.’ Normally, George will leave his email and phone number and ask them to contact him. He tries to figure out what happened and remedy the situation, and people respond well to that. The quicker you respond, the better. If you don’t get back to them, they probably won’t come back.”

Meanwhile, the pizzeria’s loyalty program proved so successful that Rovetto had to limit it to 500 members. “That’s out of a town of 2,800 people,” he points out. “With the program, customers spend $100 and get $15 added to an account we set up on our POS program for them. It grew to the point where we had to cut it off because it became too popular. There are a lot of tourists, of course, and second-home owners who come here from everywhere, but we wanted to keep our loyalty program local. Everyone wanted to be a part of it, which is great, but we prefer to give back to those people who come in two or three times a week.”

Although customers must give their email address to become members of the program, Rovetto says he doesn’t flood them with messages. “We give them a free pizza on their birthday, but we email them only once in a while. It’s less intrusive to advertise to them through social media.”

“To me, local sourcing is just common sense. Doesn’t it make sense to support your local farmer and his family down the road versus buying bulk tomatoes from Mexico? You’re investing in your community.”
—Eduardo Rovetto, Piecasso Pizzeria & Lounge

Rovetto’s mother, Rosa, died six years ago of cancer, and he misses her to this day. “It left a hole in my heart. She’s a big part of why I work so hard,” he says. But his dad, Quinto, is still going strong and pops in for visits several times a year. “I think Dad marvels at how we went from a 15-seat mom-and-pop takeout restaurant to this enormous place that’s bursting at the seams most nights. My parents are the reason I have made it this far. Without them, it wouldn’t have been possible.”

He’s also quick to give credit to his wife, Sarah, and to his staff of 80 full-time and part-time employees, for Piecasso’s success. “It’s a small army that keeps taking this to the next level,” he says. “And it’s still fun because I love seeing people leave the restaurant happy. I love people on the street telling me what an amazing job my staff did. It makes me feel really good that we’re executing the vibe and the product day in and day out. We’ve done a great job with it so far, and I want to continue to do so. I’m pretty young, and I’ve got kids to put through college!”