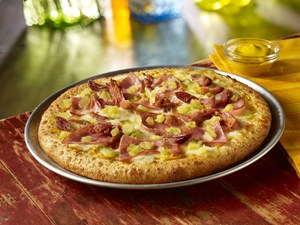 THE COLONY, Texas, Jan. 8, 2013 (GLOBE NEWSWIRE) — Pie Five Pizza Co., a division of Pizza Inn Holdings, Inc. (Nasdaq:PZZI), has added a Havana twist to its growing diverse menu with the introduction of its new limited-time offer the Cuban Pie.

As the newest distinctive pie featured on the Pie Five menu, the Cuban Pie is handcrafted with tender pulled pork, deli sliced ham, a blend of mozzarella and provolone, a special mustard sauce and topped with diced pickles. This limited-time offer is available now through February 17, at all eight Dallas-Fort Worth locations.

"By utilizing a unique mustard sauce and our classic Pan Style crust along with ham and our smoky pulled pork and then garnishing the pizza with diced pickles, we have managed to re-create the flavor profile of one of my favorite sandwiches, the Cuban," said Pie Five Chef Andy Wittman.

Recognized by Nation's Restaurant News as a 2012 Hot Concept award winner, Pie Five allows guests to select from more than a million combinations of fresh made-to-order pizzas and a variety of specialty pie choices prepared in less than five minutes on a Crispy Thin, Classic Pan, Italian Herb Thin or Gluten Free Crust.

Pie Five has grown to eight locations across the Dallas-Fort Worth Metroplex, with a ninth location opening this month in Denton on the University of North Texas campus at 1120 West Hickory and a tenth location opening later this winter on the Texas Christian University campus at 3051 South University Drive in Fort Worth. In addition to these new locations, Pie Five recently awarded its first two multi-unit franchise development agreements in Utah and North Carolina.