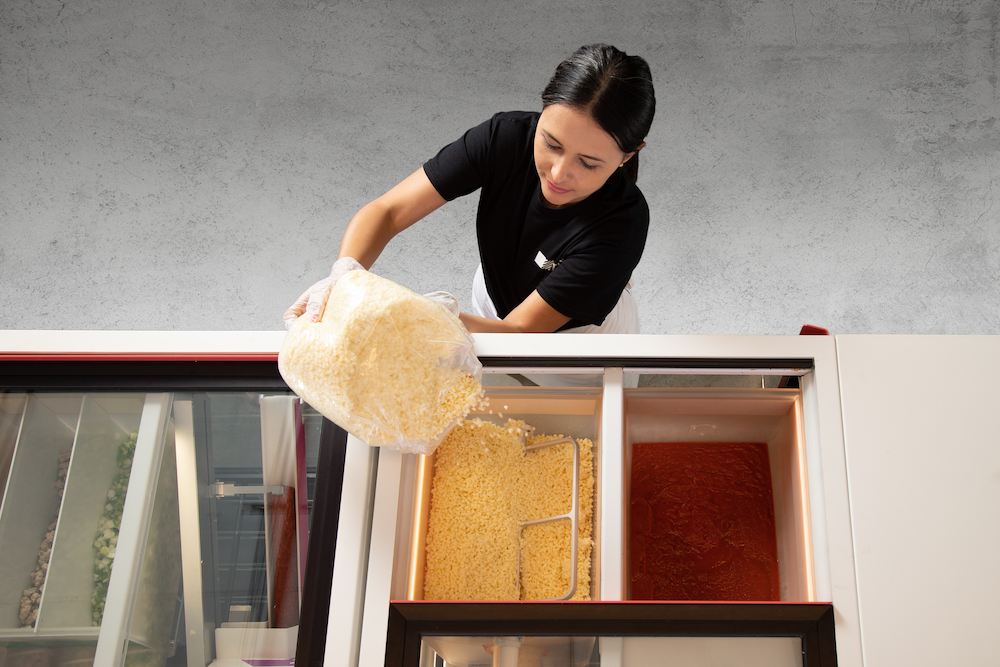 Pizza-loving students at Texas A&M are getting a taste of the future, thanks to advanced technology from food automation company Picnic.

Picnic says its system will enable Chartwells to provide fast, efficient service to guests while reducing potential food and product waste by 80%. In addition, Chartwells gets to bring Texas A&M students a unique dining experience that’s never been seen before on a college campus.

Picnic CEO Clayton Wood graduated from Texas A&M in 1980, so the partnership marks something of a homecoming for him. “As a former student, it makes it even nicer to see our station at home in Aggieland,” he said. “Bringing the Picnic Pizza Station to Texas A&M is the first step of many innovations to come.”

The Picnic Pizza Station is autonomous and customizable for each order. After the dough is loaded, the Picnic station applies the sauce, cheese, fresh-cut pepperoni and additional toppings. The finished pizzas are then loaded into the kitchen’s ovens for cooking. Each hour, the station can assemble up to 100 pizzas that serve 400 people, according to Picnic.

Reducing food waste is an important issue to college students concerned about the environment and social justice. According to the U.S. Environmental Protection Agency, food is the single largest category of material that ends up in landfill. Wasted food emits methane, a powerful greenhouse gas that’s 21 times more powerful than carbon dioxide.

“The Picnic Pizza Station allows one person to make up to 100 consistent pizzas an hour, while reducing food waste to around 2%—a significant reduction from the average 10% that most kitchens experience today,” Clayton Wood told PMQ. “The Picnic station dispenses consistent amounts of ingredients and places them on the pizza with precision, which eliminates overtopping, spillage and production errors.”

Food waste isn’t just bad for the environment. It can hurt a pizzeria’s bottom line, too, especially in a period of rising inflation. “With food costs at an all-time high, waste is even more expensive and impactful on a foodservice operation’s profitability than ever before,” Wood noted. “Reducing food waste is a primary benefit of automation solutions, which can eliminate errors in consistency, communication and the wasteful process short cuts that occur during rush times with human workers. Given the challenges of the past year, we predict that this year, foodservice operators will be even more focused on finding new tech solutions for their restaurants.”

Automating the pizza-making process cuts back on labor, too. Marc Cruz, Chartwells’ district executive chef, said they’ve seen “a significant increase in efficiency with the Picnic Pizza Station. What used to take three people now only requires one, which allows us to free people up to do other critical duties in the kitchen.”

The college market will play a key role in Picnic’s growth, according to Wood. “University dining facilities, and larger kitchens in general, are under tremendous stress to deliver the quantity, quality and consistency of food to maintain guest satisfaction. As the foodservice industry struggles to recover from shortages and shutdowns, it’s more critical than ever to make operational changes now to improve efficiencies and lower costs.”

In addition to the partnership with Chartwells, Picnic has other pilot programs in the works, Wood said. Picnic is ramping up commercial production and accepting preorders for its Picnic Pizza Station. “We are seeing increased demand from operators of all sizes and look forward to making more customer announcements in the near future,” Wood said. “As a company, the team grew by 83% in 2021, allowing us to expand our engineering, roboticists, food engineers, marketing, and customer support teams. Even with this growth, we continue to hire for all job functions as customer demand increases. We’re very excited for this growth, the customer interest and the opportunities ahead.”