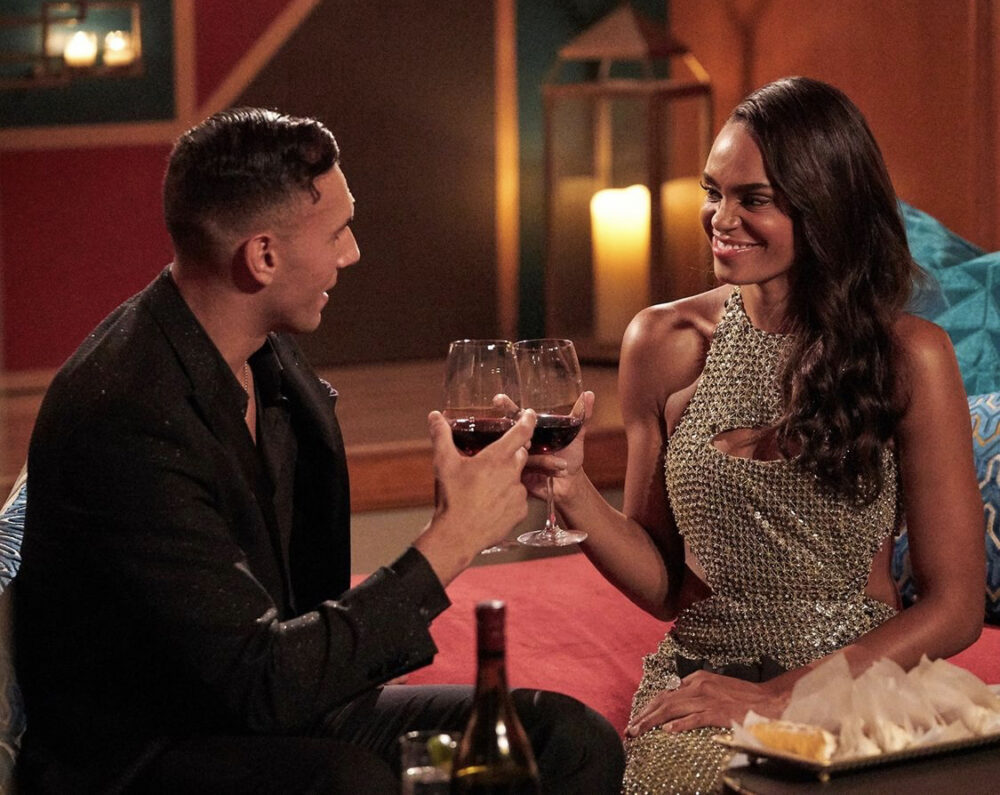 Peter Izzo and Michelle Young enjoy cannoli and vino on "The Bachelorette."

The dough must be rolling in for Peter Izzo, the owner of Peter’s Pizzeria in Port St. Joe, Florida, and one of the featured contestants on the current season of ABC’s “The Bachelorette.” Izzo and his brother, Bobby Pokora, announced recently that their company, HYD (How Ya Doin’) Hospitality Group, will open two new locations of Peter’s Pizzeria in South Florida in the coming months.

Last week Izzo survived the first round of “The Bachelorette,” in which he’s competing against 29 other single men for the hand and heart (and maybe stomach) of elementary schoolteacher Michelle Young.

Izzo and Pokora founded HYD Hospitality Group in 2019, the same year that Peter’s Pizzeria opened in Port St. Joe. The new locations will debut in Boca Raton next month and in Pompano Beach in Spring 2022, according to an HYD press release.

Without mentioning “The Bachelorette,” the press release said Izzo “has won the hearts of pizza lovers everywhere by cooking with both art and science.” He grew up in an Italian household in Long Island and received a bachelor’s degree in hospitality management before working and studying abroad in Florence, Italy. The release says Izzo was also a general manager for a New York restaurant “that hosted 300-plus guests daily,” which “motivated him to find ways to serve quality food at a price everyone could afford.”

Pokora is described in the press release as a successful developer and investor who co-founded Peter’s Pizzeria with Izzo.

“After Hurricane Michael, Port St. Joe suffered, and we felt compelled to get involved in the community and help bring back its hospitality sector,” Pokora said. “We had always dreamed of starting a family business, and we found that in Peter’s Pizzeria. It’s doubly exciting that we were able to launch one that paid homage to our family and our roots.”

“We couldn’t do any of this without our customers,” Izzo noted. “It makes me so happy to see them repeatedly come back for our Sicilian Pie or Chicken Parmigiana. Both Bobby and I believe it’s critical to give customers great food at a quality price point. During a time when restaurants are struggling to stay open or make a full comeback, this has been our recipe for success and, dare we say, growth.”

In an October 19 article about Izzo, CheatSheet.com speculated that the pizzaiolo “might be getting the villain edit.” The article notes that “Peter has been shown getting into an argument with ‘The Bachelorette’ cast, and he even throws someone’s jacket in the pool.”

However, the show’s cohost, Kaitlyn Bristowe, hinted that the “pizzapreneur” might not be as villainous as he initially seemed. “I don’t know if I would call him a sweetie,” Bristowe said on an Instagram video about the show. “He’s loud. He’s not a sweetie. But he’s not a meanie. He’s just loud. I think he’s a lot but not in a terrible way.”

“I’m pretty sure he yelled a lot about pizza,” she added.