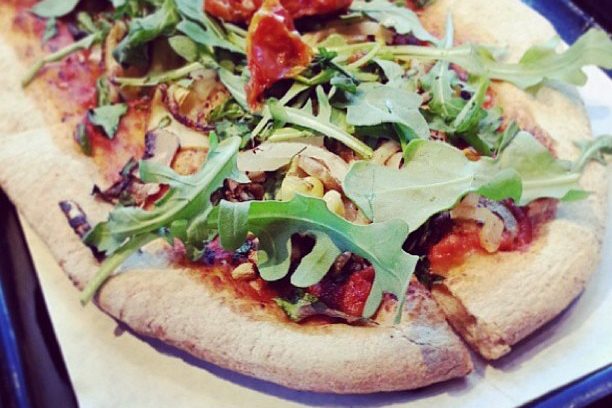 Restaurant chains across the United States are displaying more vegetarian and vegan options on menus, but how many are truly embracing the cause? PETA recently graded pizza chains from best to worst by the availability of vegetarian or vegan dishes on the menu.

Twelve pizza chains and pizzerias made the cut as PETA granted them with the highest grade of “A.”  This is because they provide numerous vegan options such as Pizza Luce’s homemade vegan cheese made from tofu and cashews; Picazzo’s vegan-friendly BBQ sauce; and Paulie Gee’s vegan fennel sausage and its vegan ricotta dessert pizza. Below is the rest of its highly rated restaurants:

PETA then ranked the rest of pizzeria chains based on vegan availability. For example, those awarded with a “B” featured no vegan dishes but did have vegetarian dishes and/or faux meat toppings. Some of these graded pizza chains like MOD Pizza and Paxti’s already have numerous vegan options.

PETA awarded a “C” to those whose vegan options that cost a little more than a regular pie. For example, Minsky’s vegan cheese on a large pizza will cost $3.75 extra.

Numerous popular and national chains failed to meet PETA’s vegan standards by offering no meat- or dairy-free toppings. Although the organization acknowledges that Domino’s, Papa John’s and Pizza Hut have all featured vegan options such as vegan cheese and jackfruit toppings, they are not widely available.

Only two pizzerias earned the egregious “F-minus.” PETA gave the lowest grade possible to Godfather’s Pizza for not even having a vegan crust.

PETA deferred grades for Little Caesars and UNO Pizzeria since they’re testing vegan options. For example, Little Caesars has debuted the first Impossible Meat pizza while UNO will be launching vegan pies by this October.

Whether its grading was fair or foul, one thing stands out: vegan is here to stay.