As with many Italian foods, pesto emigrated to the States during the post World War II period, but while spaghetti and pizza flourished, the traditional basil-based paste proved a late bloomer. However, today pesto boasts a wide fan base that has elevated it to chain eatery menus nationwide, and it’s now available in a variety of flavor combinations, from lemon artichoke to spicy cilantro. Big names in pizza, including Mellow Mushroom (mellowmushroom.com) and Bertucci’s (bertuccis.com), are serving it up on specialty pies. Will it be the next big hit at your pizzeria?

In Liguria, Italy, the region that includes Genoa, pesto—a blanket term for any mixture made by crushing ingredients together with a mortar and pestle—has been enjoyed for hundreds of years. Basil, garlic and pine nuts grow plentifully in this mountainous region, and combining the three into a sauce with olive oil and Parmesan or Romano cheese provided a convenient way to preserve the vivid herbaceous flavors so they could be enjoyed by seafaring Ligurian men on long journeys.

Most Americans think of red or white sauces as being key to traditional Italian cuisine, but in Liguria, pesto is king. “They don’t use tomato sauce—they use pesto,” says Lou DiLisio from Casa DiLisio Products, based in Mount Kisco, New York. “Basically, pesto replaces tomato sauce in the Genoa area.” In the United States, though, pesto had a tough time getting the same star treatment. It first was introduced as an imported product and recipe in the late 1940s and 1950s, but not until the 1970s, when fresh basil became widely available, did it really grow in popularity. Even then, it was somewhat lesser-known. “The only people who really knew pesto were people who traveled to Genoa,” Lou DiLisio says, recalling his business’ early days. “Nobody knew what it was—we had to give it away,” adds the DiLisios’ daughter and business partner, Linda.

By the 1990s, pesto became a familiar culinary term. Pesto recipes moved beyond the traditional basil type, soon incorporating cilantro, mint and alternative nuts into their bases. “It’s not only a fad anymore—it’s a standard,” says Lou DiLisio. “It has become a very big item.”

Elliot Fiks, a senior partner at Whole in the Wall, a combination restaurant and pesto wholesale operator in Binghamton, New York, had a similar experience; he watched his restaurant evolve toward supplying pesto as the product surged in popularity. “People liked it so much, we were living, eating and breathing pesto!” he laughs.

With so many varieties of pesto on the market, it pays to sample many and be choosy about ingredients. If you’re making your own, keep in mind that, like tomatoes, basil is best in the summer and can lose its flavor in cold weather or for other environmentally related reasons. In Liguria, only the freshest and sweetest basil leaves, plucked from the top of the basil plant, are used to make the signature paste.

Of course, in the United States, a true pesto Genovese can be achieved by importing basil or the sauce itself. Companies still claim bragging rights over sweeter basil varieties, pure ingredient lists, perfect grinds, highly concentrated sauces, carefully controlled olive oil and no preservatives. Others take dietary restrictions into consideration and offer products that are vegan, or allergen- or dairy-free. And today, the paste is available in more than the traditional basil varieties, with flavors ranging from Mexican-inspired chipotle to Italian-inspired lemon artichoke and sun-dried tomato.

Nancy Wekselbaum, owner of The Gracious Gourmet in Bridgeport, Connecticut, believes that moving beyond basil pesto can lead to exciting territory. “If you ask those who have grown up with Italian cooking, you’ll find many people talk only about basil-based pesto,” she says. “But pesto has really evolved beyond just basil; it can be almost any kind of smooth vegetable product.” 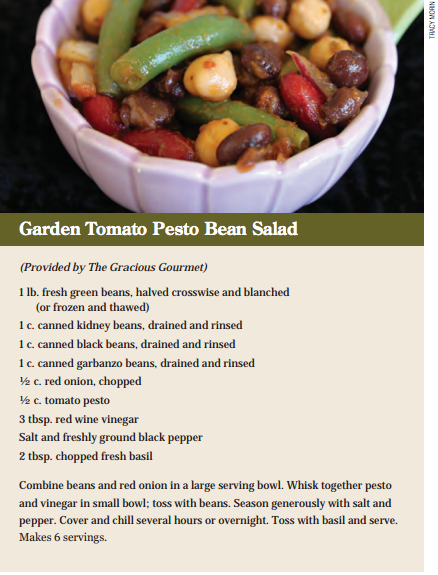 In Genoa, people put pesto on everything, and the same has become true for restaurants in the United States. As the four teenage girls in a Whole in the Wall video exclaim, “Put it on your pasta, put it on your bread, put it on your chicken, put it on your head!” In a pizzeria setting, using pesto on pizza in place of tomato sauce is an easy way to incorporate the condiment. “Pesto pizza is a really big deal,” says Linda DiLisio. “The combination of chicken, pesto and tomatoes really knocks your socks off.”

Paired with the right mix of other toppings (or none at all), pesto can inspire great new pizzas. “Everyone gets hung up on basil, which is traditional, but all pesto flavors are really great with pizza,” says Fiks. For example, he recommends trying a pie with chipotle pesto, Mexican queso and cilantro. “It’s about using your imagination and being creative—you can do anything with it,” he says.

In addition to pepping up pizza with a pesto sauce, pizzerias might try mixing pesto with an equal amount of cream and some wine, then tossing with pasta. Fiks’ restaurant offers two types of pesto pasta on rotation to let customers sample different varieties. Another trend is the introduction of pesto mayonnaise to replace traditional sandwich condiments. Fiks advises mixing a garlic pesto with equal parts mayonnaise to create an aioli, which can pair with many dishes.

For customers who might not know what they’re missing, Wekselbaum advises chefs to give out sample cups of pesto mixed with rigatoni or orzo. Another sampling option: Crackers and pesto cream cheese (equal parts pesto and cream cheese) are given to customers at Whole in the Wall, in lieu of bread and butter.

Other ways in which to use this versatile spread: On crusty bread, pesto forms a great base for bruschetta. Pesto can also dress up salads, or be added to mayonnaise or sturdy cream as a crudités dip; adds flavor when slathered on plain fish or chicken after cooking; and makes a great flavor enhancer for any kind of calzone. You might even look into pairing your pestos with wine, like some wineries Fiks sells to.

All of these ideas, backed by sampling efforts, can help jump-start perhaps the best marketing for pesto—word of mouth. “I think the best way to market it is by letting the customers taste it,” Wekselbaum says. “Tasting is believing.”

Willow Nero is a freelance writer based in Washington, D.C.