Perfect pairs: Brewmasters and pizza makers share their most popular pizza-beer pairings for the summer of 2018 - PMQ Pizza Magazine 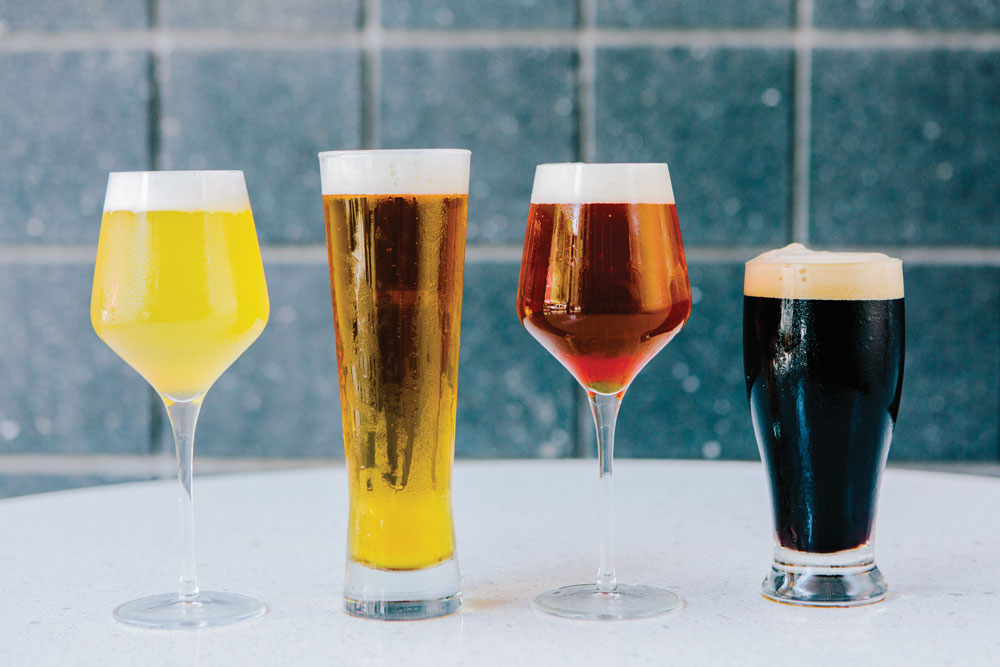 Ready to add a little mojo to your menu?

We asked brewmasters and pizzaioli around the country to brag about their most popular pizza-beer pairings for the summer of 2018. From a craft brew inspired by The Flaming Lips to a Berliner Weisse that’s heavy on the beets (yes, you read that right), here are nine slice-and-brew combos to inspire you in your own quest for the perfect pair. 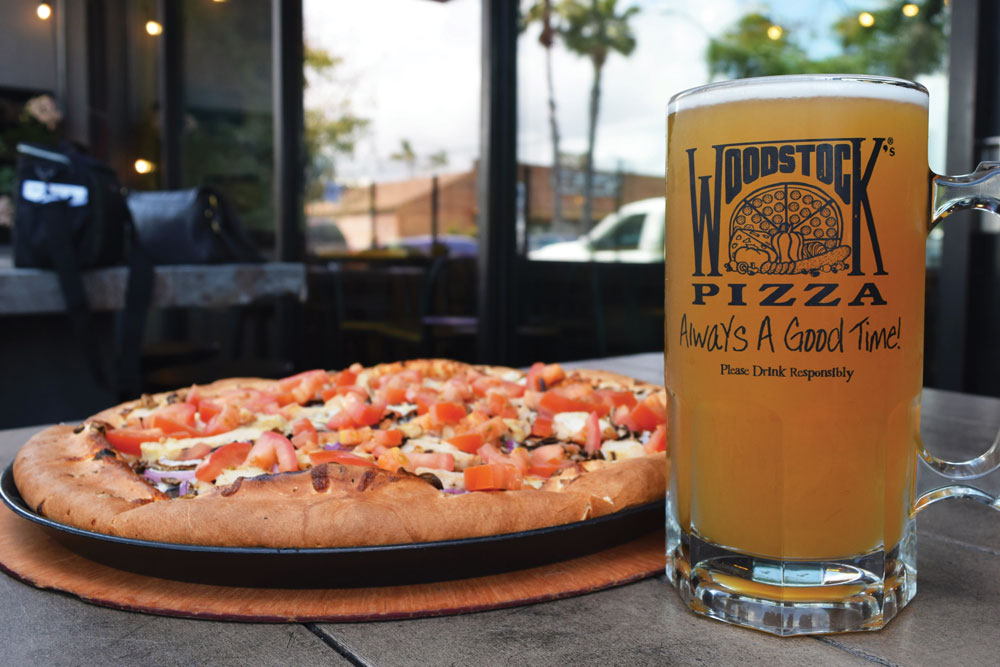 San Diego bills itself as the craft brew capital of America, so it’s no surprise that Woodstock’s, headquartered in the city’s Pacific Beach neighborhood, takes pride in its beer-and-pizza combos. One customer favorite: Woodstock’s Garlic Bird pie, made with a creamy garlic sauce, grilled chicken, chopped mushrooms, red onions and Roma tomatoes, coupled with the light-bodied, golden White Rascal from Avery Brewing in Boulder, Colorado. The hearty, robust flavors of the garlic sauce and tomatoes complement the light, citrusy notes of the White Rascal ale, which is cleverly spiced with coriander and Curaçao orange peel. 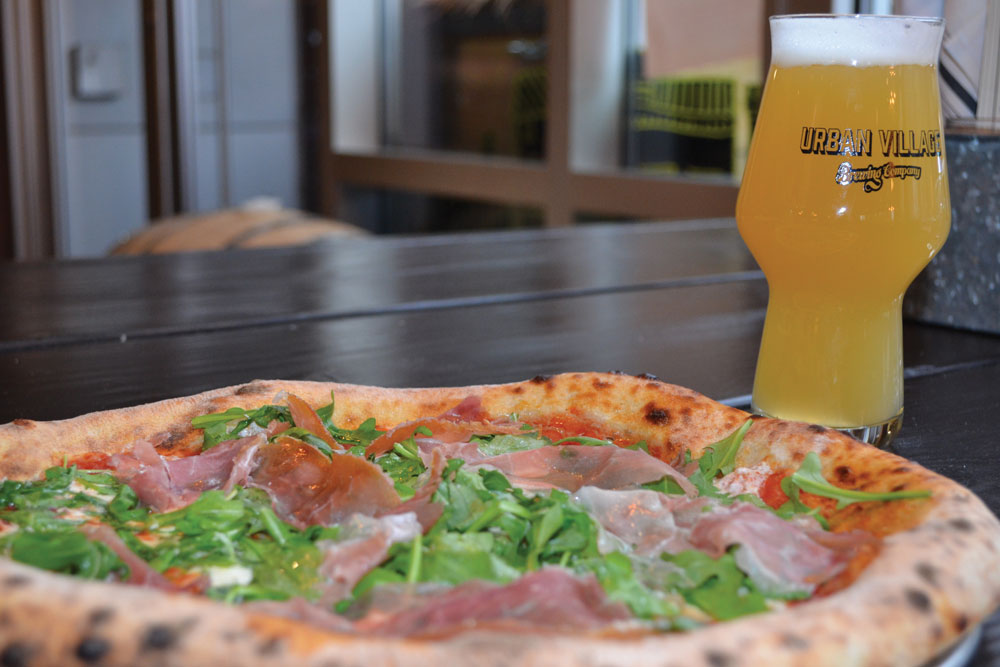 Named for Urban Village’s North 2nd Street location, the 2nd Street is a light, easy-drinking American blonde ale. According to executive chef Chris Davis, the beer’s kiss-of-citrus notes complement the delectable mix of flavors on the Pamela, a pizza made with prosciutto, arugula, and Pecorino and mozzarella cheeses. 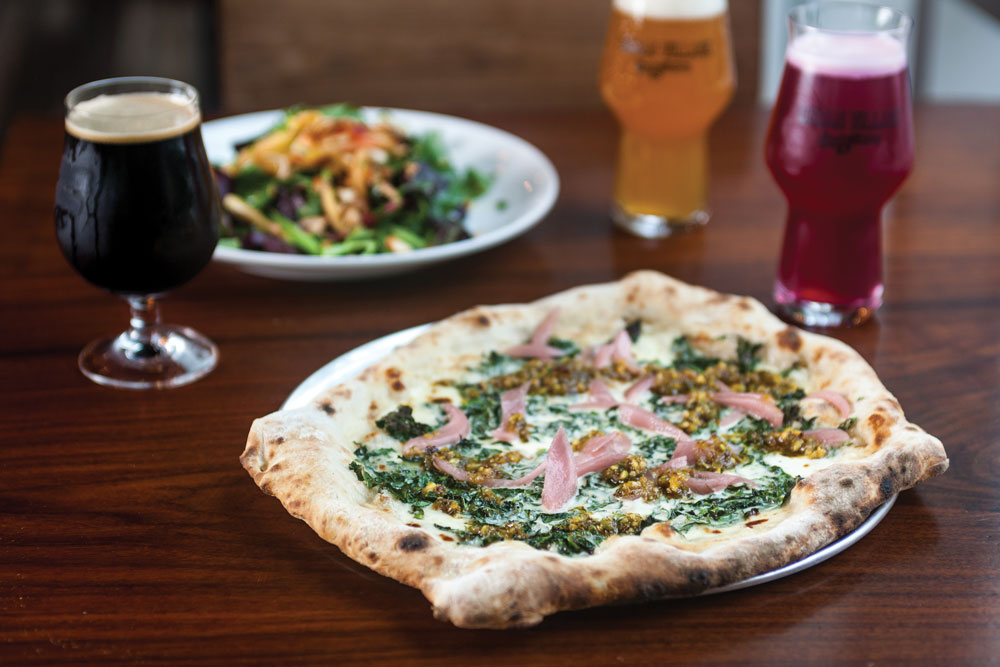 Another Urban Village favorite, Beets by J is a gorgeous Berliner Weisse made with 300 pounds of beets, giving it an earthy, vegetable taste and a splendid, bright pink hue. Thanks to the beets’ sweet flavor, it goes best with rich, piquant toppings on pies like the oh-so-savory Kelly, featuring black kale, cream, Pecorino, pistachio pesto, pickled onions and mozzarella. 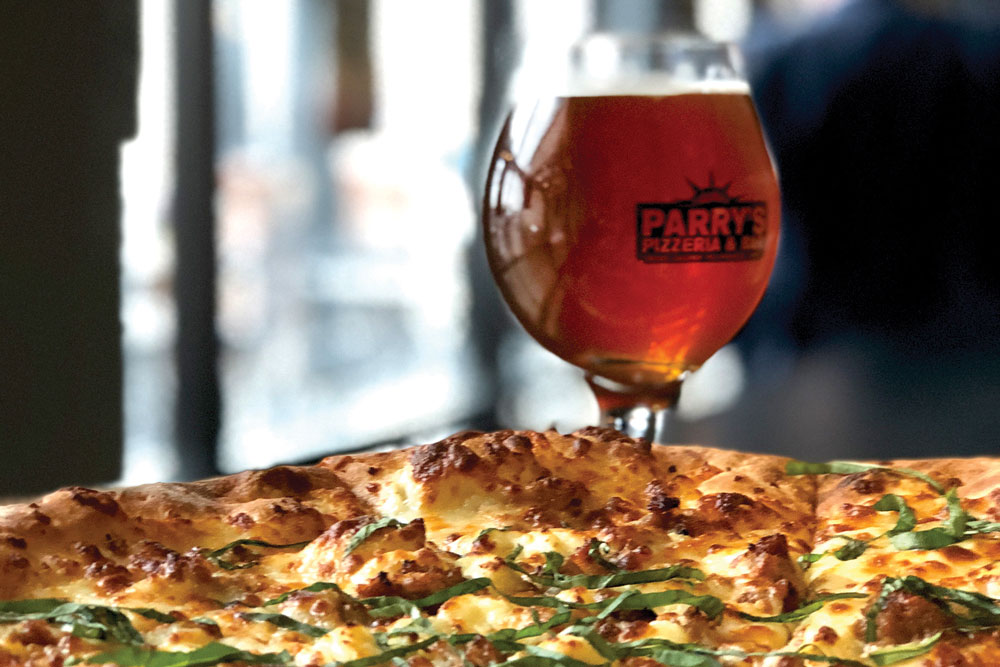 For a brew inspired by rock-and-roll royalty, try Dragons and Yum Yums, created by Dogfish Head in collaboration with The Flaming Lips. It features dragonfruit, yumberry, passionfruit, pear juice and black carrot juice, all added into the brew. It’s paired with a white pie topped with Italian sausage, roasted garlic, goat cheese and fresh basil. The slight tartness of the goat cheese cuts the sweetness of the beer’s fruity components, while the fresh basil speaks to the hop profile retained in the beer’s finish. 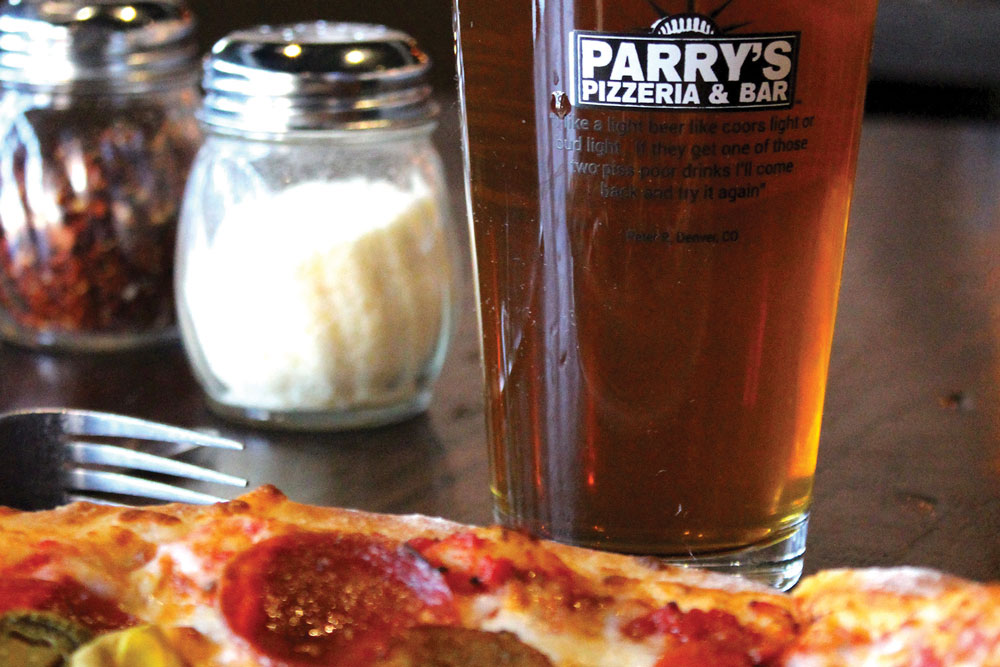 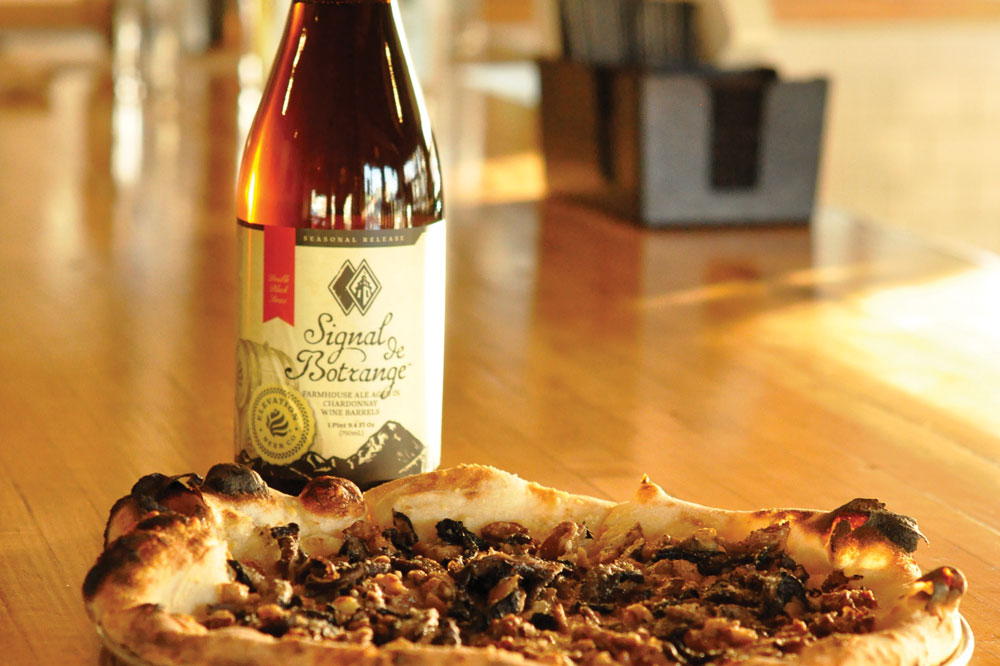 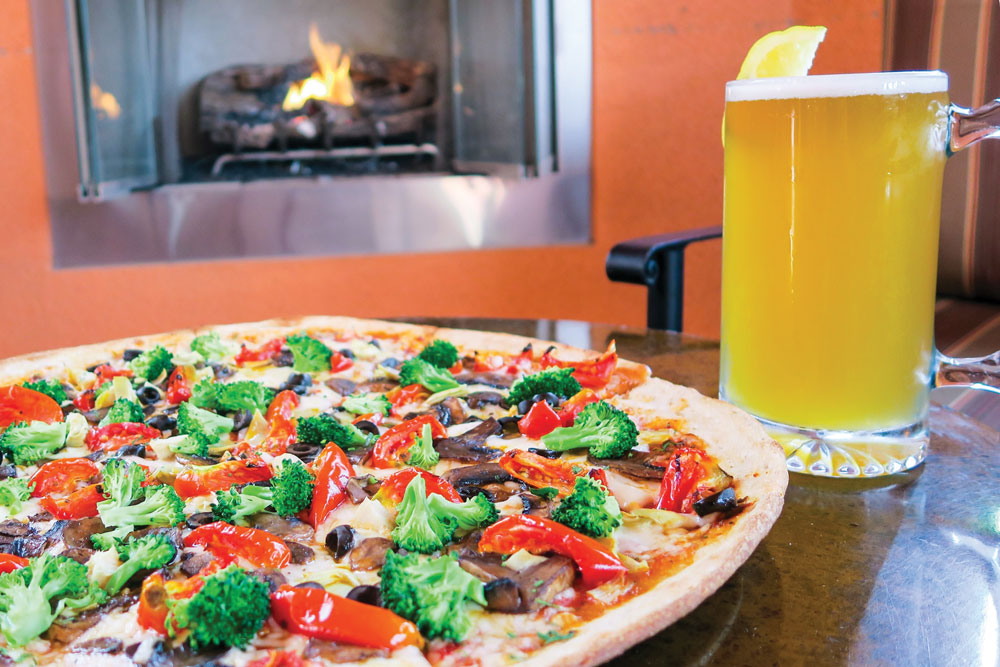 Brewmaster David Otto deals a winning hand with his two-of-a-kind Golden Hefeweizen and Grilled Vegetable Pizza. The Bavarian-style Hefeweizen—a wheat brew with hints of spice, banana and citrus—complements the freshness of the veggies and the zesty sundried tomato pesto for a light but bracing and flavor-packed warm-weather treat. 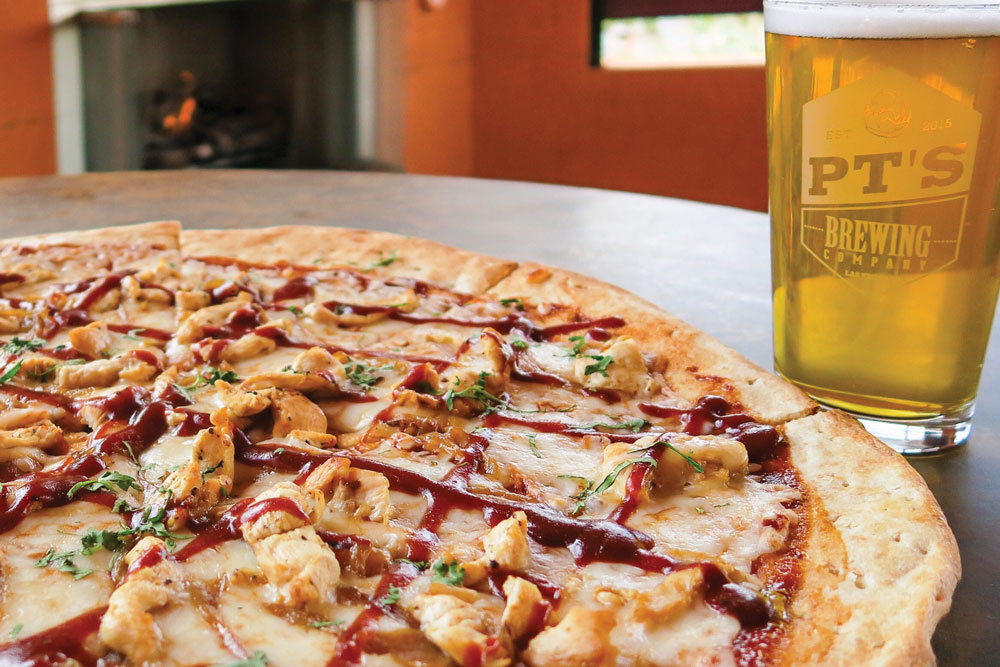 Another sure bet is the house-brewed Hualapai IPA paired with PT’s BBQ Chicken pizza, topped with barbecue sauce, chicken, sweet onions and fresh cilantro. The lively flavors of this West Coast IPA, brewed with Centennial, Amarillo, Citra and Mosaic hops and bearing notes of citrus and stone fruit, stand up to the tanginess of the barbecue sauce and the nuances of the toppings. “I love this pizza in the summer, because it’s taking the backyard barbecue and putting it on pizza,” Otto says. 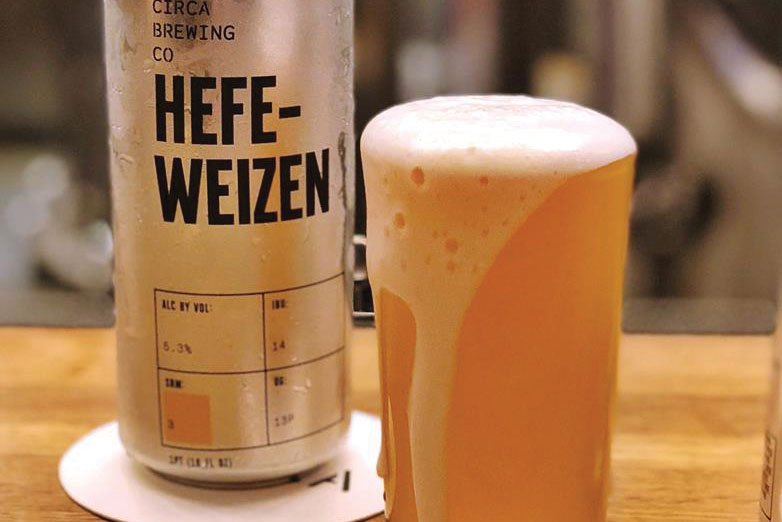 Circa rolled out its first-ever Circa Hefeweizen in late April. Described as medium- to full-bodied with an abundance of yeast character, this brew boasts notes of cloves and banana on the nose. According to chef Shawn Burnette, the Hefeweizen’s spice profile and mouthfeel marries harmoniously with the spicy heat from housemade pepperoni and sausage on Circa’s wood-fired Salumi pizza.