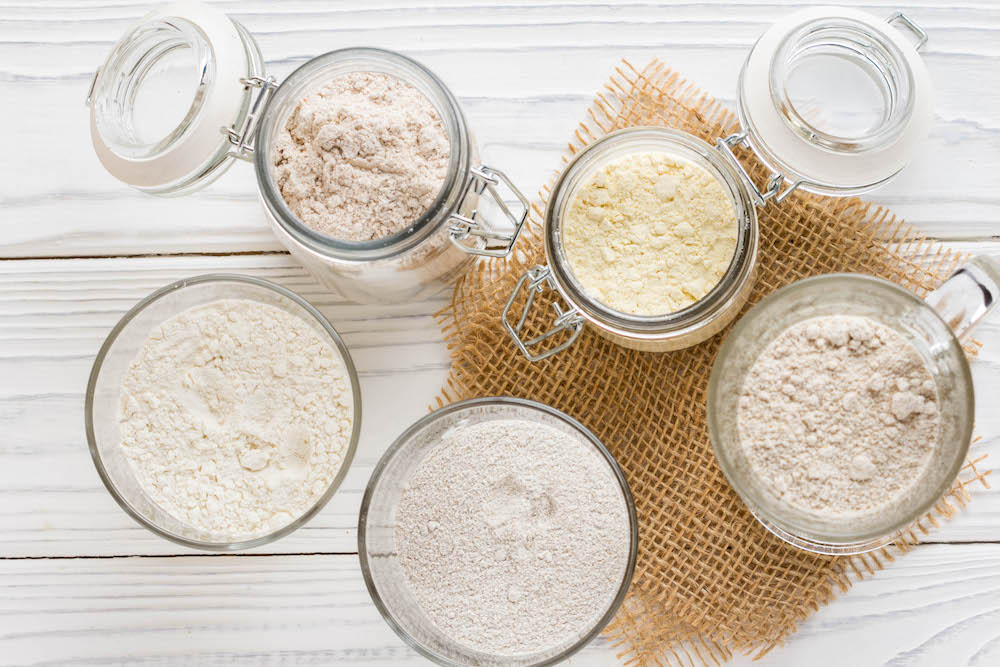 Alternative pizza crusts can be made from a variety of milled and whole grains.

Pizza is an ancient food, born of the need to find a simple way of enriching bread to make it more substantial and tastier. The most interesting thing about pizza is its variety. The universal success of pizza is contained within a fairly simple formulation and in the many transformations that are accomplished by simply adding or replacing one or more components. The number of variations is countless, considering the different toppings, sauces and dough/crust types that can be combined together. This article will focus on variations within the base of the pizza and the wide varieties of alternative pizza crusts that can be used to produce them.

Numerous ready-made flatbreads—such as naan, flour or corn tortillas, par-baked pizza crusts and English muffins—can be topped like a pizza and baked. Pocket breads such as pita can be topped and baked like a pizza or sliced vertically so the pocket can be opened and filled with toppings. Ciabatta, focaccia and French bread can be sliced and topped like a pizza. Bruschetta (bread that has been sliced, coated with oil and toasted) can also be used as the base crust for a pizza.

Alternative pizza crusts can be made from a wide variety of milled and whole grains, fibers, seeds and nuts, including wheat, bulgur, spelt, durum, emmer, kamut, amaranth, barley, buckwheat, rye, corn, oats, millet, sorghum, teff, triticale, rice, quinoa, and assorted seeds and nut meats. They can also be made with veggies like cauliflower, zucchini and spinach, or tubers (starches) such as potatoes, cassava, taro, tapioca. Finally, you can make alternative pizza crusts from legumes such as fava beans, chickpeas, soybeans, lentils and many other varieties.

Some examples of ingredient additions or substitutions for alternative pizza crusts include:

Multigrain blends can also be used to replace a portion of the regular flour in the formulation. There’s no standard of identity or rules about the amount that needs to be added to the dough when it comes to calling something “multigrain.” Multigrain blends can also be added to whole-wheat dough. When using multigrain blends and whole-wheat flour in dough, some sweetness in the finished crust may be preferred and will help to enhance the flavor of the crust. Honey, molasses or white or brown sugar can be used at 3% to 4% based on the amount of flour added to the dough. But adding sweeteners to pizza dough is a matter of personal preference and isn’t necessary to provide food for the yeast. The more sweetener you add to a dough system, the more the resulting crust will brown/color during baking. If the crust browns too quickly or excessively during baking, the toppings may not be adequately baked/heated, and the crust may have an “off” or bitter flavor associated with the increased browning.

Masa flour provides what is best described as a corn chip flavor. It’s especially well-suited for those occasions where a “Tex-Mex” crust flavor is desired. Replace 15% of the regular white flour in the batch with yellow, white or blue masa flour. Be sure to use masa flour and not cornmeal, which will not give the same flavor. However, cornmeal can also be used in dough as a partial replacement for flour; again, 15% of the total flour is a good starting point. This addition works well in thick and deep-dish crusts, like those used in Chicago-style pizzas. The cornmeal can give the crust an interesting color difference and offer a unique mouthfeel in the baked crust.

We’ve given you some good ideas for getting started on creating your own alternative pizza crusts. But you’re probably wondering about gluten-free crusts and vegetable-based crusts. Take heart, there’s more to come in part 2 of this article!

Jeff Zeak was formerly a PMQ columnist and the pilot plant manager for AIB International. This article was edited and adapted from an earlier “Zeak’s Tweaks” article that appeared in the March 2011 issue of PMQ Pizza Magazine.