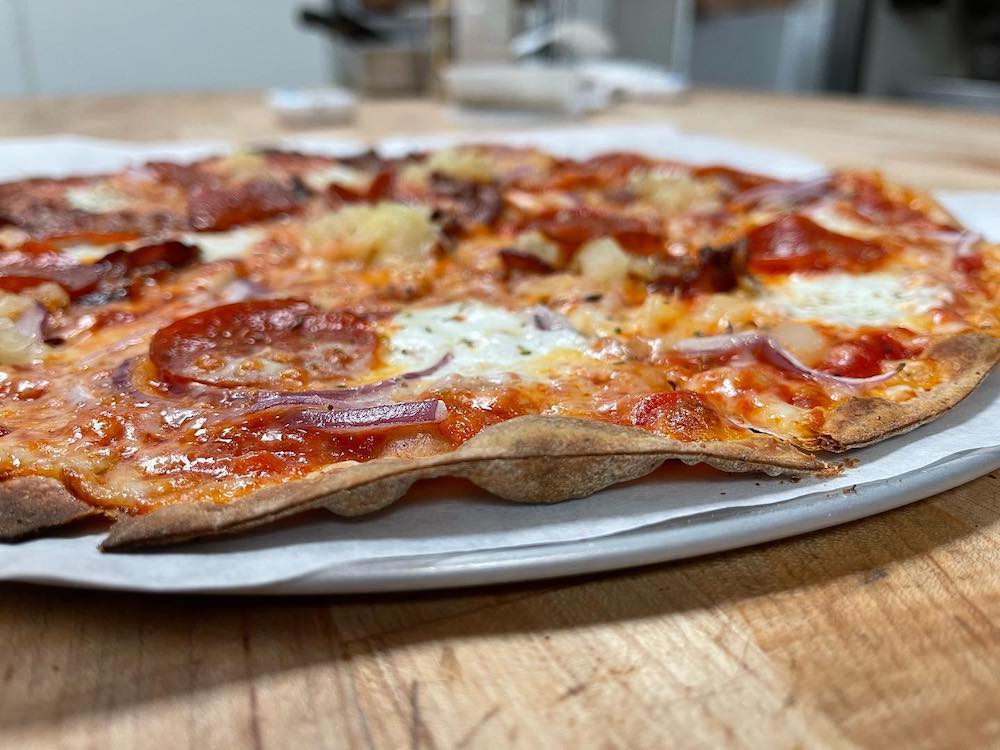 Native Chicagoans know there’s a lot more to their pizza than deep-dish. At Paper Thin Pizza, located on North Green Street, the crust couldn’t get any thinner without “disappearing completely into the void,” writes Nick Kindelsperger in the Chicago Tribune.

The Tribune says Paper Thin, owned by married couple Drew and Ray Anthony, “aims to be the thinnest crust in Chicago.” In an origin story that has become familiar to many pizza lovers in the pandemic era, the Anthonys started experimenting with their own version of an ultra-thin-crust pie while stuck at home and were soon selling them out of their house. They eventually set up in Soho House Chicago, a members-only club with a bar that’s open to non-members, where customers can dig into Anthonys’ pizza for dine-in or carryout.

The Infatuation calls Paper Thin’s crust “cartoonishly thin” and “practically two-dimensional.” But, the site adds, “The fact that each slice defies the laws of physics is just plain fun, and the pies have a soft, foldable crust that envelops the toppings in a very satisfying way. Plus, this super-thin crust has char bubbles that taste a little like Extra Toasty Cheez-its, which everyone knows is one of the best snacks on the planet.”

According to the Tribune, Drew Anthony starts with a low-hydration dough, usually around 45%. The dough ferments at room temperature, after which Anthony runs it through a sheeter multiple times until it’s “as thin as we can get it.” The dough then cools in the fridge overnight and is topped while it’s still cold. The dough, he said, “is very tough to work with” and rests on parchment paper to keep it from sticking to the pan while it’s baking in the oven.

The toppings have to be cut thinly, too, of course, but the crust is relatively sturdy and can support multiple meats and veggies. Still, the pie is cut into slices rather than squares because “it’s such a light pizza [that] the squares won’t hold together.”

Pies on the Paper Thin menu include the Hot Trax, described as a “super spicy anthem pizza,” featuring sausage, jalapenos, giardineria and a finish of hot oil, honey and basil, and the Pete Tong with pepperoni, broccoli, red onion, giardineria and fresh basil. The specialty pizzas come in one size—14 inches—and sell for $17. A make-your-own pizza starts at $16 plus $2 for additional toppings.