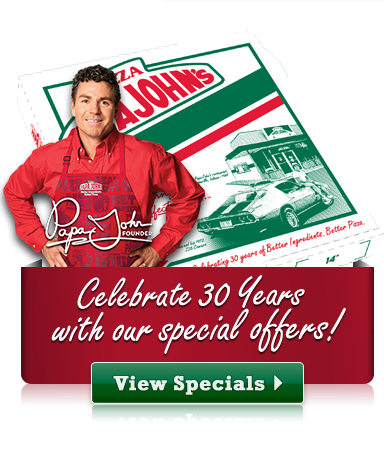 In 1984, while most people were focused on watching that year's two hot new TV series, Miami Vice and The Cosby Show, or catching the blockbuster movie, Ghostbusters, John Schnatter was hard at work perfecting a better quality pizza and opening the first Papa John's restaurant. More than 4,300 restaurants later, Papa John's is celebrating its 30th anniversary by offering its loyal customers a 30 cent pizza deal.

Now through Jan. 26, Papa John's fans can log on to www.papajohns.com to get a large one-topping pizza for just 30 cents with the purchase of any large pizza at regular menu price. Fans can sweeten the deal with Papa's Chocolate Chip Cookie for just $5 more.

"After 30 years it's still about making a better quality pizza," said Schnatter, Papa John's founder, chairman and CEO. "Papa John's has realized tremendous growth over the past 30 years, but the success of the brand has always been rooted in the principles we established in 1984 – using better ingredients to make a better pizza."

Schnatter founded Papa John's in 1984 after he sold his beloved 1972 Z28 Camaro to help save his father's tavern. He then began selling pizzas out of the tavern's broom closet. From day one Schnatter believed he could make a better pizza by using fresh dough and superior-quality ingredients.

Headquartered in Louisville, Kentucky, Papa John's International, Inc.is the world's third largest pizza delivery company. For 12 of the past 14 years, consumers have rated Papa John's No. 1 in customer satisfaction among all national pizza chains in the American Customer Satisfaction Index (ACSI). Papa John's is the Official Pizza Sponsor of the National Football League and Super Bowl XLVIII. For more information about the company or to order pizza online, visit Papa John's at www.papajohns.com , or visit us on Facebook at www.facebook.com/PapaJohns , on Twitter athttp://twitter.com/PapaJohns .