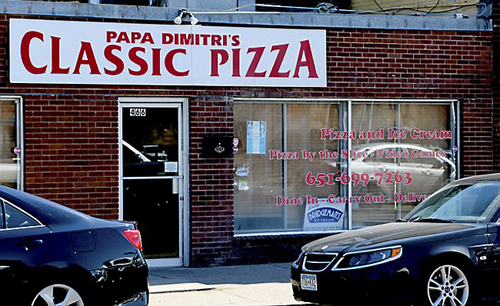 It wouldn't be the first time pot and pizza have gone together like milk and cookies. A pizzeria in St. Paul, Minnesota, allegedly was a front for a marijuana-dealing family. Police have arrested four suspects, including the owner, his mother and grandmother, who ran Papa Dimitri's Classic Pizza in Minneapolis, Minnesota.

Huffingtonpost.com reports last week authorities arrested Ryan Dimitri Brooks Sr., 27, the owner of Papa Dimitri's Classic Pizza and Ice Cream; his mother, Rosalyn Mary Brooks, 61; grandmother Joyce Elaine Merkley, 82, and a woman he lived with, Lena Shalay Kirk, 24, according to TwinCities.com. They were each charged with multiple felonies including conspiracy to sell marijuana; cocaine possession; engaging in business of concealing criminal proceeds; and illegal possession of a handgun by a felon.

Authorities began investigating Papa Dimitri's Pizza last August after getting a tip that the restaurant was rarely open and didn't seem to do a lot of business, KARE TV reports.

Read more about the pizzeria that went to pot.