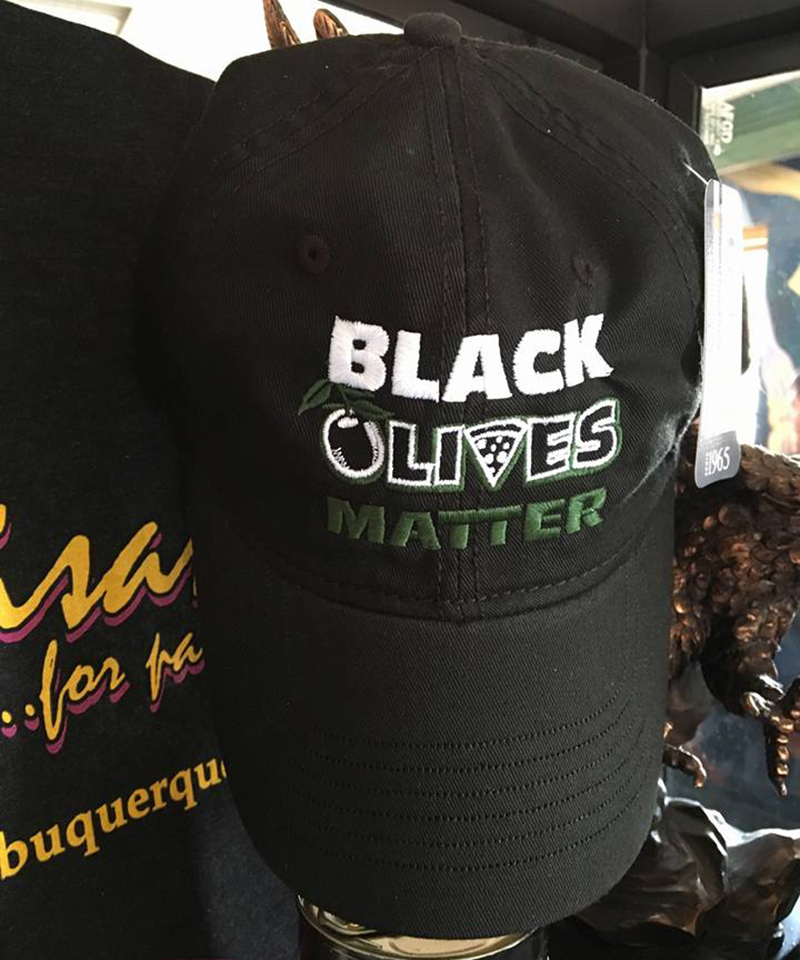 After stumbling into controversy in July with an outdoor sign that read, “Black Olives Matter,” Paisano’s in Albuquerque has revived the slogan—and brought on more controversy.

The company recently unveiled new T-shirts ($20) and hats ($25) bearing the slogan. Numerous photos on the restaurant’s Facebook page advertise the merchandise, and staff members pose for additional photos in the garb, suggesting that Paisano’s has decided politically charged controversy can be good for business if you don’t mind the criticism that comes with it.

And the criticism came quickly in the forms of angry posts on Paisano’s Facebook page. “We were looking to take a school team there this year, but no way will we go there, eat there, AND we will all post on Facebook about this disgusting action,” one poster commented. “You should be ashamed of yourselves for this racist T-shirt. Horrible.”

But other followers rose to Paisano’s defense. “I’m glad a lot of people are fighting back against political correctness,” another poster wrote. “There’s some real issues in this world to be concerned about. A slogan that is meant to poke fun at a criminal organization like Black Lives Matter is not one of them. I will be eating at this restaurant soon. I love how people of all races are not taking this issue seriously.”

Paisano’s earned national coverage in July after changing its outside sign, which frequently features humorous messages, to read, “Black Olives Matter – Try Our Tapenade” to promote one of its specials. Many took the joke as a not-so-veiled attack on the Black Lives Matter movement and derided it as politically incorrect. The pizzeria’s owner, Rick Camuglia, quickly changed the sign after it generated headlines in the Washington Post and coverage from local TV stations. “We didn’t think anybody would be offended by that,” he told ABC affiliate KRQE at the time. “It was not our intent to offend anybody.”

However, he added, with a hint of defiance, “I think if that offends someone—a statement about black olives—that somebody needs to re-evaluate their politically correct meter.”

Sounds like Camuglia has done just that. It’s a calculated risk—we’ll see how it plays out for him.