Packing a punch into your perfect pizza - PMQ Pizza Magazine 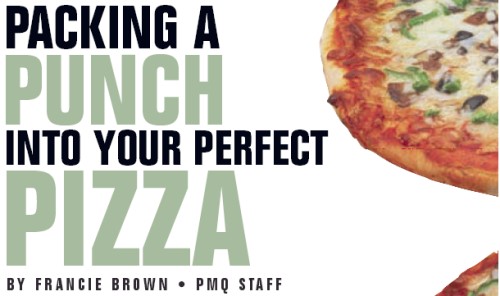 Ever wanted to add garlic to your crust to give it that little bit of extra flavor but found that you couldn't add it without overpowering everything else or ruining the action of the yeast?

Well, now a company out of England gives you a way to add not only garlic, but just about any flavor you might want to try.

According to Corinne Page, director of communications for Taste Tech, the flavors are possible because of new technology that has been developed. Using a new controlled-release mechanism, you can now add flavoring to your dough in a powder form. Corinne said that the controlled release system captures essential oils, oleoresin extracts and key ingredients within a microfilm of hardened vegetable oil (or something similar) and transforms them into free flowing powders, which retain all the aromatic flavors of the original spices.

The flavors are designed in such a way that they stay encapsulated until either heated to a certain temperature or are activated in some other way (such as through chewing). Keeping the flavor contained until a certain temperature has been reached allows the yeast activity in your dough to be completed.

The flavoring should be used at a level between 0.2 and 0.6 percent as flavorings, give or take some, depending on how you want it to taste. A wide variety is available (pizza spice, jalapeno, chili, oregano, basil, black pepper, bread aroma, butter, cheese, garlic, mixed herb, mushroom, onion, pepperoni, pineapple and salami) for pizzeria owners. "The powders can be tailored to suit different product applications by altering the melting point, release mechanism, particle size and flowability," Corinne said.

With a shelf life of six months, the flavored powders give you more freedom to experiment with different tastes and varieties of your dough. Think about how you could expand your menu. Since the flavors don't have to be mixed into the dough, but can be sprinkled on top, you could offer your traditional crust and your customers special order what they want. With this burst of flavor, your customers will come to appreciate your pizza in a whole new way.