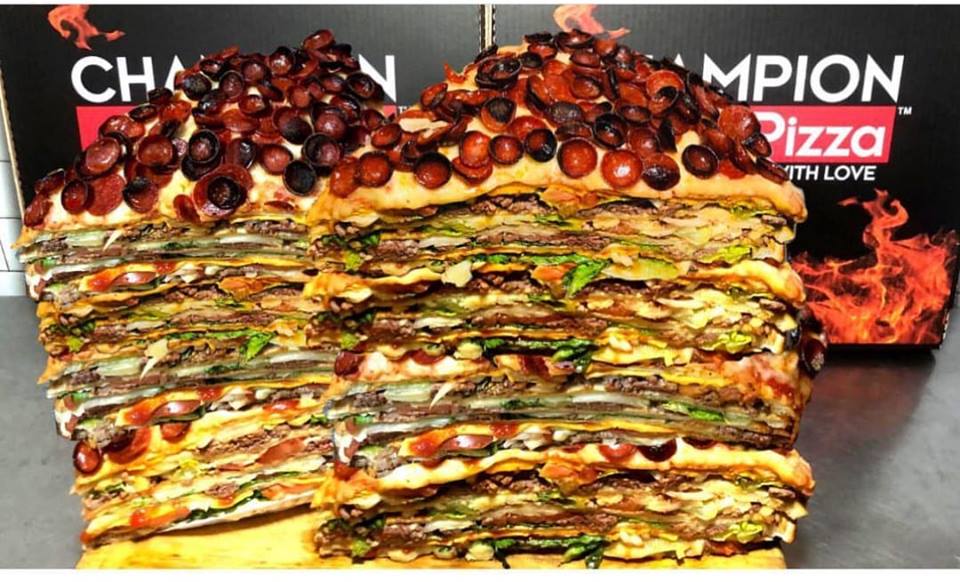 Hakki Akdeniz didn’t invent the cheeseburger pizza, but he’s the marketing genius who supersized it—all the way up to 40 pounds—and then charged $2,000 for it.

As NBC New York reports, Akdeniz, the famously innovative owner of Champion Pizza in New York, dreamed up a menu item that’s part pizza, part cheeseburger and fully over the top. But it’s all for a good cause: Proceeds from the pie will go to those affected by Hurricane Florence in North Carolina.

The six-layered pizza takes three hours to bake. It starts with a plain crust topped with mozzarella, lettuce, tomatoes, onions and crumbled beef. The second layer is heaped with more mozz plus slices of American cheese and a drizzle of ketchup. The layering process continues, with a 10-pound beef patty serving as the fifth layer, which is then topped with a classic pepperoni pizza for the sixth and final layer.

“We like to do fun things, and people had been asking us to put a burger on the menu,” Akdeniz told NBC New York. “So I was, like, let’s come up with something cool and that people will think is fun.”

The pizza must be ordered three days in advance, but Akdeniz said he hopes to sell a total of 1,000.

Believe it or not, the $2,000 cheeseburger pizza isn’t the most expensive pie Akdeniz has ever touted. Following the 2016 presidential election, he created the Trump Pizza, with the new president’s last name spelled out in 23-karat edible gold and a price tag of $5,000 and $10,000. That pizza, ironically enough, was also topped with special reserve caviar from (ahem) Russia.