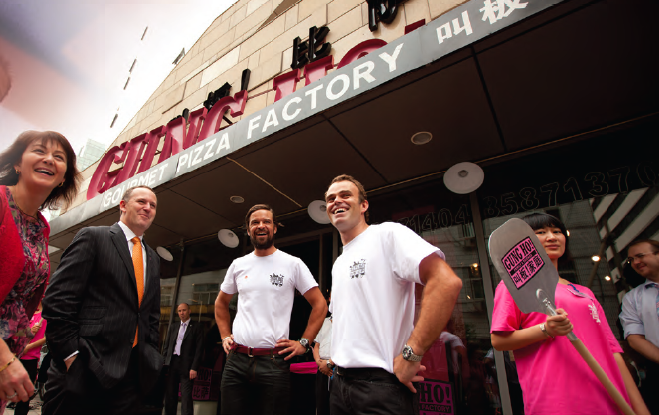 From Pizza Hut’s innovative delivery-only franchise in the U.K. to Domino’s plans of opening establishments in Berlin, the franchising pizza market is growing internationally. In addition to Domino’s and Pizza Hut, both Papa John’s and Papa Murphy’s have attained international success. Yet, while larger pizza franchises have made more inroads because of their brand awareness worldwide, mom-and-pop pizza places can also thrive abroad with an innovative concept and a strategic plan.

A current international hot spot for franchising pizza brands is the U.K. Not only is the country’s pizza franchise market already extremely developed, but there has been a strong lead fl ow for food franchises—especially pizza establishments. This growth in the U.K. is due to a shift in consumer trends: More consumers are favoring takeout and delivery pizza rather than eating at sit-down restaurants. Additionally, a surge in new technology to order pizza, such as the Internet and text messaging, has resulted in an increase in sales for these pizza franchises.

Domino’s has taken advantage of the home delivery trend. Through a well-developed marketing strategy, Domino’s has been able to reach the stay-at-home culture in the U.K. by recognizing the potential for brand exposure on Saturday night TV: The company now sponsors both Britain’s Got Talent and The X Factor. In the last quarter of 2009, sales at Domino’s outlets in the U.K. surged 15.6%, to 112.4 million pounds (more than $170 million), due to the increased market exposure. And that success carried over into 2010, with like-for-like sales up 11% in the first six weeks of the year. As a result, the company has pledged to step up its expansion plans in England. Pizza Hut has also caught on to the delivery niche and recently began offering a delivery-only franchise in the U.K. called Pizza Hut Delivery.

Like the U.K., Germany has seen an increase in interest for pizza franchises this year over last year. At one time, only Pizza Hut offered franchises in Germany, while other top pizza brands—Domino’s, Papa John’s and Papa Murphy’s—did not. Domino’s, however, announced last May that it will begin franchising in Berlin and eventually expand nationwide.

Many restaurant operators say India also offers great growth opportunities as rewarding as those pursued in China since the mid-1980s. India is the world’s largest democracy, has a middle class the size of the entire U.S. population, and is the planet’s second fastest-growing economy behind China. Domino’s Pizza in India has maintained its position of market leadership with its constant product innovation; today, Domino’s Pizza has grown into a countrywide network of more than 220 outlets in 42 cities. Pizza Hut, which is the market leader in the United States, also has a strong position in India, with 140 restaurants across 34 cities. Its parent company, Yum! Brands, reports that India is one of the most important emerging markets.

However, pizzeria franchises that expand into India must be ready to change their menus drastically in order to cater to local tastes and dietary restrictions. For example, pizza restaurants in this country feature more vegetarian options than domestically, due to the high percentage of Indian consumers who are strictly vegetarian. Operators in India also adopt local spices, flavors and meat alternatives for toppings. Pizza Hut reports that one of its more popular offerings in India is masala, a savory blend of spices.

However, not every country shows the kind of growth witnessed in India. For example, in Spain, pizza franchises generated a total of 570 million euros in 2009, illustrating that the pizza franchise market has been of less interest to consumers. Overall, the market has decreased by 4% as the rest of the fast-food sectors have increased between 2% and 5% each. Despite this trend, Domino’s has recently announced its intention to begin franchising in Spain.

Mom-and-pop pizzeria establishments can benefi t from franchising abroad, but fi rst they must build a strong brand on a national level. Franchising abroad can be achieved by implementing a convenient and affordable franchising expansion strategy that will allow the franchisor to build the brand overseas—without having to handle the day-to-day operations of each outlet.

Top global franchises share a number of characteristics that contribute to their success: strong and internationally recognized brands; a well-defined business model; comprehensive training and ongoing support; adaptability; and innovation. One of the first steps a franchise can take when looking to franchise internationally is obtaining the rights to its business’ name. In doing so, you may find that another company is already using your name at a local level. This is one of the fi rst points that a person must clarify before franchising.

Another significant challenge is the need to create detailed documentation of all systems and procedures throughout your company; this is necessary in order for the business to be replicated by future franchisees. A comprehensive plan can be in the form of a hard copy or an online manual. Yet no matter what form your plan takes, this is a huge undertaking. As a result, many companies use consultants that specialize in preparing such manuals. Another step of expanding internationally is looking for a master franchisee in the country in which you plan to enter. The master franchisee is someone who purchases the rights to sub-franchise and is responsible for building the franchisor’s brand in a specific country or territory. The master franchisee should have a familiarity with the local market, experience in the relevant industry (ideal, but not always essential), proven financial resources and proven management skills.

Since overhead costs associated with franchising a business are so high, one needs a significant number of franchisees to pay royalties in order to cover the overhead structure. In Europe, franchising exhibitions or trade shows are very popular, as they’re the ideal meeting platform for connecting entrepreneurs with international franchisees. In relation to the internal structure of the company, the management team will likely have to be strengthened, with a senior employee designated to handle all franchising.

A company should also assess its ability to source outside capital. Venture capitalists are interested in investing in franchise companies because of the possibility of significant growth and return on investment. The investment can be used to strengthen your management team, as well as buy outside expertise, such as franchise consultants to help with detailed documentation, branding, legal expertise, registration of trademarks and protection of intellectual property.

Most importantly, a franchisor considering international expansion will need to research the country in which he is planning on entering. It’s important that a franchisor thoroughly understands the cultural nuances, finds the right partners and strikes a menu balance between local tastes and brand staples. A successful global concept is one that adapts to local tastes and cultures.

Although integrating a brand across the globe can be a complex process, it can be achieved with the appropriate amount of research and dedication.

Sean McGarry, founder and CEO of Franchise Direct, has spent more than two decades in the franchise industry, advising a range of companies and individuals on franchising or investing in a franchise. Franchise Direct is now one of the world’s leading franchise portals, with a network of websites dedicated to the United States, Canada, the U.K., Ireland, Spain, France and Germany.