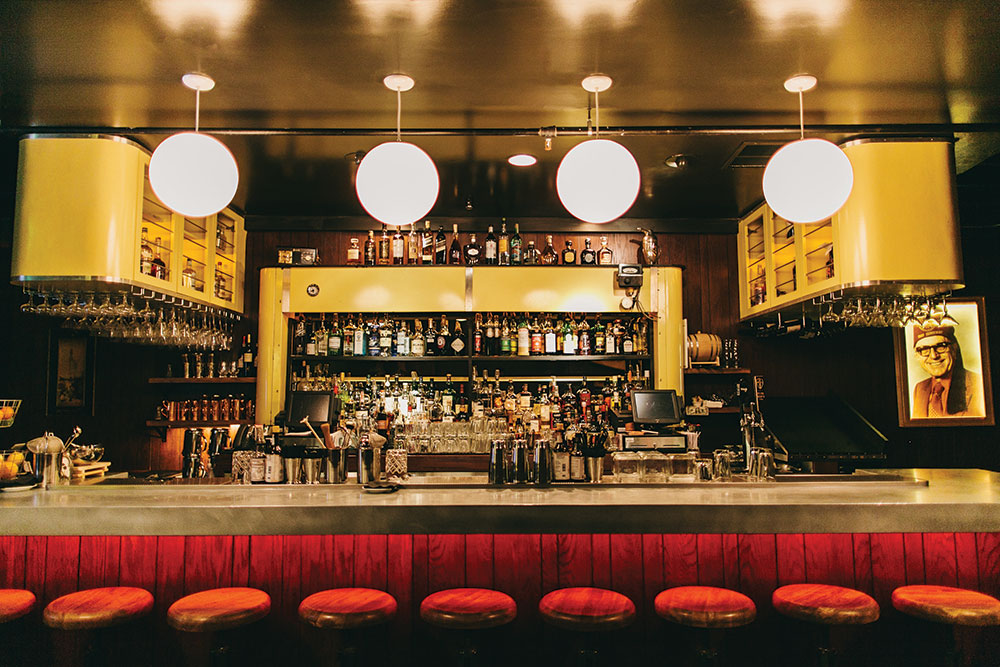 Offering alcohol at your pizzeria may not only boost profits—it may actually impact the customer’s view of his experience. According to foodservice research and consulting firm Technomic, consumers who ordered an adult beverage on their most recent visit to a chain restaurant were particularly likely to be highly satisfied with their experience: More than three-fifths of adult-beverage consumers gave their last visit an “excellent” rating, compared to about half of those who did not order an adult beverage. This November 2013 report, “Adult Beverage Consumption at the Leading Restaurant Chains,” also noted that alcoholic-drink consumption is associated with stronger levels of loyalty to a restaurant.

If your pizzeria offers dine-in, you might be thinking about adding a bar. But what do you need to know to equip it—and make it a success? Here, experts share their secrets for a thriving bar and a winning alcoholic beverage program.

Beer and pizza make an irresistible pair for hungry—and thirsty—patrons. Michael Daley, director of operations for Grotto Pizza (grottopizza.com) in Rehoboth Beach, Delaware, points out that the most cost-effective way to keep beer kegs behind the bar is with an under-bar keg fridge, which can hold one to six kegs. At some of Grotto’s sports bar locations, the beer systems have refrigerated tubes that go from back-of-house walk-ins to the bar’s taps, keeping the beer cold in transit. “This system can be cost-prohibitive, however, for a smaller pizzeria—about $15,000 to $20,000, depending on the number of taps and the distance the beer has to travel,” he explains. “Adding a bar (without new construction) would be easier with an underbar kegerator; the tap comes from the top of the keg.”

Most commercial refrigerator companies, he adds, make keg refrigerators in single or double units, and you can install multiples if you have the space. Also, says Daley, because so many bars are selling craft brews, beer companies are now adjusting by making their kegs smaller so more can be stored behind the bar.

Keith Wallace, president and founder of The Wine & Beers Schools of Philadelphia, believes that a bar works best with five to six beer taps, allowing for reasonable pricing per keg—plus, since maintenance (such as cleaning tap lines) has to be done anyway, you’ll get your money’s worth. “It costs about the same to have two or five to six, and six can be stacked if space is an issue,” Wallace says.

But when it comes to selecting the right kinds of beers, Wallace has changed his opinion in recent years: He no longer automatically recommends carrying the big “national” brands, although it always depends on your location. Wallace notes that after recent sellouts to international companies (and the rise in craft beers), major formerly American brands, including Budweiser and Miller, are quickly losing market share. Instead, he suggests, offer something similar to the bigger brands, such as a Yuengling, Pabst Blue Ribbon or Sam Adams. “You usually want at least one good, inexpensive choice, but the rest can be microbrews,” Wallace notes. “They sell well, and their markup is incredibly high.”

Of course, what you choose to carry on draft will depend on your customers and your pizzeria. Though Miller Lite and Coors Light are huge sellers in Grotto’s beach locations, Yuengling is also popular in the region, and craft brews from Delaware-based Dogfish Head are downright expected. Meanwhile, Baltimore-based Hersh’s (hershspizza.com) applies its made-from-scratch ethic to its bar program, too—meaning that the 10 taps feature only craft beers (although standards like Miller Lite and Peroni make the bottled list). “We used to have one big-name brew on tap, but people weren’t buying it,” says co-owner Stephanie Hershkovitz. “We found they were coming more for our fast-changing selection of craft beers.”

Similarly, at Pitfire Artisan Pizza (pitfirepizza.com), based in Los Angeles, customers have come to expect elevated quality, according to “beverage czar” Lawrence Rudolph, so in its eight locations, up to 10 taps pour almost exclusively craft beers. “Some of the beers may be mainstream as far as taste profile, but we don’t do Bud Light—we use local beers, almost all from Southern California,” he says. That mindset extends even to his soda selection: Pitfire sells all-natural, cane-sugar sodas in lieu of traditional brands.

Finally, Pitfire also offers eight to 10 wines and a craft cocktail on tap, which requires stainless steel lines and a wine pouring system with nitrogen and CO2. “We started wine on tap because it costs less, creates a better product because there’s no air, and leads to zero waste because the first pour is as good as the last,” Rudolph says. According to Wallace, boxed wines can also offer great value and good taste—plus a shelf life of up to one month (compared with two to three days for a bottle).

We started wine on tap because it costs less, creates a better product because there’s no air, and leads to zero waste because the first pour is as good as the last.
—Lawrence Rudolph, Pitfire Artisan Pizza 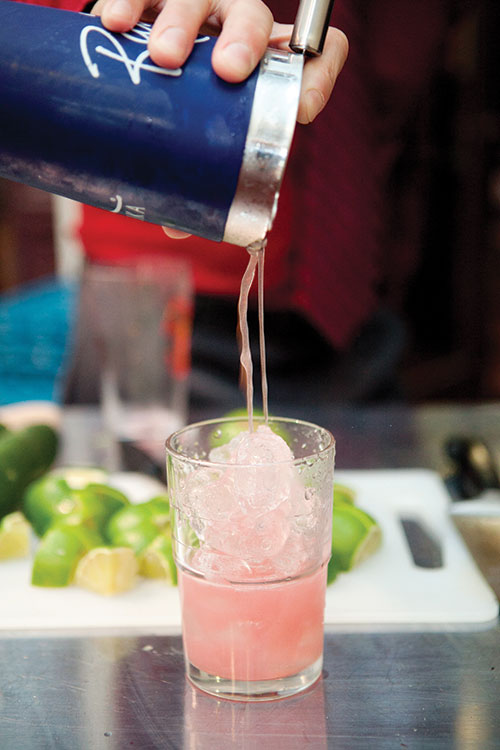 While many pizzerias offer only beer or wine, Technomic’s report notes that “mixed drinks and cocktails may help operators to differentiate their concepts and drive loyalty, pointing to opportunities in crafting signature creations and expanding the selection of spirits brands in a restaurant’s bar.”

Wallace notes another benefit of having a cocktail list: It streamlines ordering and training. “Having a cocktail list seems fancy, but if you have eight drinks on offer, bartenders don’t need to know how to make every drink known to man—they can be trained on those eight,” he observes. “This also limits the amount of alcohol you need to have on hand.” He recommends incorporating different flavor profiles, such as sweet, sour and savory, on the menu to appeal to most customers.

Hersh’s has cashed in on the craft cocktail trend by creating a drink menu with from-scratch drinks that aren’t fussy—four to five ingredients, max, says Hershkovitz. Meanwhile, smaller distilleries make up much of the bar’s selection, although familiar vodkas like Tito’s and Ketel One are on offer.

Pitfire also incorporates smaller-batch, local spirit companies, so larger brands like Stolichnaya and Belvedere might be positioned next to lesser-known Bison Grass and Hangar One. Rums run the gamut from Mount Gay to Caña Brava, though Jack Daniel’s has been shunned in favor of Bulleit, Buffalo Trace and Angel’s Envy. “We don’t do this just to be different; we feel the quality is better in smaller-batch products, and we like to support local and U.S. brands,” Rudolph says.

On the other hand, the more casual Grotto has found its sweet spot by offering major brands alongside the latest trendy liquors, like Fireball or flavored vodkas. Rail brands offer the most profitable pours (and are the cheapest picks for nonpicky customers), but some locations might stock a high-end vodka like Belvedere or a pricey whiskey like Macallan. “We set basic minimums as a company, but managers in our 20 locations can customize for their clientele or according to requests from regulars,” Daley says. “There is no such thing as ‘basics,’ and some things are hot one month and not the next. It’s really something you have to stay on top of, and a good liquor rep can help with this.”

Wallace notes that rail liquors will be the most-used, so it’s important to find a good-quality all-purpose brand in each of the main categories (rum, gin, vodka, whiskey/bourbon or tequila). Though he notes the best-selling vodka is still Grey Goose, an inexpensive vodka is ideal for well drinks. For a cost-effective yet high-quality rum, Barbancourt or Cruzan work well. In addition to a fancy gin such as Hendrick’s on the back bar, stock a dry London gin like Gordon’s on the rail. Finally, instead of whiskeys, he recommends carrying bourbon.

“Whiskeys are either very expensive or bad and cheap, but bourbon tends to have better quality control and is less expensive,” he explains. “I wouldn’t advise carrying Scotch; maybe a blended Scotch would work, but very few cocktails use Scotch—plus, it’s high-ticket, prone to theft and doesn’t sell much.”

As far as liqueurs, Wallace warns that some types (including vermouth) are perishable, so determine the product’s shelf life before you shell out, and buy smaller bottles. Also beware that liqueurs, with their typical sweetness, can become an operational nightmare if the bottles aren’t cleaned regularly (think fruit fly convocations).

If you’re taking the trouble to stock a bar, you’ll need to track inventory, since overpouring and “favors” from bartending staff can quickly eat away at your profits. Grotto Pizza works with a company called Bevchek that measures draft pours and links to the POS system to make sure all purchases are recorded. “We also have a liquor-dispenser program, with pourers on the top of bottles that can measure from one to 2.5 ounces,” Daley says. “These are only 69 cents apiece and are reusable.” Bartenders that free-pour can also be given pour tests once per week to make sure their eyeballing is accurate, while some pizzerias hire secret shoppers to check on bartender behavior, Daley adds.

Wallace agrees that inventory control is crucial; although you can’t prevent 100% of waste, you must put in systems to minimize it. “Inventory should be taken every morning and night, by two different people—like the day and night managers,” advises Wallace. “If you’re losing a lot—say, more than 10%—you might have a problem. Plus, if bartenders are overpouring, it affects quality; no one wants a too-strong drink.”

At Hersh’s, bartenders use jiggers and consistently take inventory to monitor waste. At Pitfire, each cocktail recipe lists the precise amount of ounces per pour, and inventory is watched closely; bottles are weighed so that the percentage used during a time period matches sales records. “Just like for food, this takes constant attention,” Rudolph says. “If something does not look quite right, we check into it further.”

Finally, when creating a bar at your pizzeria, whether you’re utilizing an existing space or adding on to your operation, you want to ensure that the bar is designed for maximum productivity—which equates to maximum profitability. Think about the overall design before you start, and check into local regulations, which might dictate everything from the size of the aisle behind the bar to how close a hand sink needs to be, Daley notes.

Above all, keep the patron’s experience in mind. “We try to design our bars so the customer isn’t just looking at the wall, so our bars are square, rectangular or circular,” Daley says. “We also have big-screen TVs behind the bar, but we make sure we place them so the customers’ view isn’t obstructed.”

Proper setup and flow for your bartenders and waitstaff also makes a big difference, especially during rushes. “Position your bar to function in concert with servers,” Rudolph says. “In a full bar, position the bartender’s station closest to where the food is made so that the servers can help with nonalcoholic beverages for customers. It’s all about economy of motion. Also, within the bar, look at function above everything. Make sure corkscrews, scoops, shakers, garnishes, etc., are in front of each station, and make sure glassware is easily accessible.”

Wallace, who has worked with numerous bar designers, recommends a simple exercise: Stand where the bartender would and see what you can get within arm’s reach, without turning around. Make sure sinks, soda guns and garnishes are at hand—and if your bar will have more than one bartender, make sure each has his own station. “Basically, wherever the water supply is, that’s where everything has to be, because it’s hard to move plumbing,” Wallace says. “The worst mistake is having everything spread too far apart. Don’t make bartenders run around—the more they run around, the less money you’re making!”