Who would have ever thought that having a pizza delivered could save their life? If you live in Cleburne, Texas, this could very well be the case.

A recent fire safety promotion in this city teamed the Cleburne Fire Department (CFD) with three pizza restaurants and had the firemen delivering pizza in the city's fire trucks. While they were at delivery customers' homes, they checked or installed smoke detectors and replaced batteries in those that were not working.

The program started January 15th and will take place on the 15th of every month. Domino's Pizza, Mr. Jim's Pizza and Pizza Hut in Cleburne participated in the event that rewarded homes that had working smoke detectors with free pizza. The program was started by the CFD and was implemented to promote fire safety, according to CFD Lt. Paul Allen. 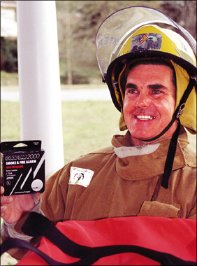 Dana Cryer, assistant manager with Domino's in Cleburne said the fire department came by each pizzeria that participated and randomly chose one delivery customer who had called in an order. "They picked up the order and a $15 gift certificate and delivered the pizza in the fire truck," Cryer said. "When the customer opened the door, they gave them their order and asked if they could check their smoke detector. If they had at least one working smoke detector they were given the $15 gift certificate. If they had smoke detectors, but the batteries were dead, the firemen would replace the batteries for them. If the customer did not have a smoke detector, the firemen would install one for free."

"We got the idea from another fire department," Fire Chief Clint Ishmael said. "The guys thought it was a great idea so we went to the local businesses with it. Some of the local hardware and home improvement stores donated the smoke detectors and batteries and the pizzerias donated the gift certificates. It has helped us to associate more with the community and possibly save lives."

This could be a good way for your pizzeria to do a service for your community. Go to your local home improvement store and see if they would be willing to donate a few smoke detectors and batteries. If you want to really make an impression with customers, have your driver check their batteries and replace them if needed. If you really want to go that extra step, have them bring a cordless screwdriver and install the smoke detector for them. You may be thinking, "But this will make our drivers take all night to deliver pizza." To avoid this simply limit the smoke detector installation to two or three per week or month and just do it on one night, preferably on a typically slow night.

Another idea would be to have the fire department deliver three pizzas on one night, similar to what happened in Cleburne, but have them put one of your car signs on top of the fire truck or fire chiefs vehicle when they deliver the pizza. Maybe the promotion Cleburne did will help "spark" an idea you can use. This promotion was reported in the local newspaper, so if you decide to give it a try be sure to call your newspaper and let them know.

From the time that this article was written, PMQ has received reports of this program being implemented in the cities of:

Could your city be next?