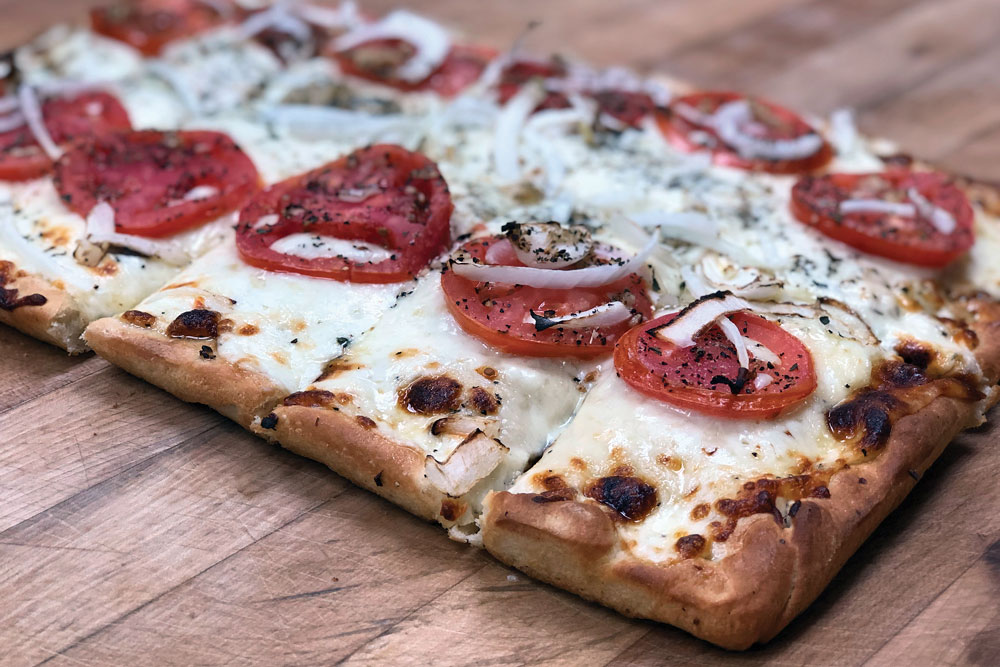 It takes hubris for a little town of 8,300 to call itself the “pizza capital of the world,” but pizzeria owners in Old Forge, Pennsylvania, know exactly what they’re doing. They’ve got their own pizza style, a rare sense of community and camaraderie, and a firm belief that their pies are as good as anything you’ll find a couple of hours away in that other pizza hub, New York City.

Ask Angelo Genell, owner of the legendary Arcaro & Genell, who has the best pizza in town, and he’ll give you a two-word answer—and those two words do not include Arcaro or Genell.

“Old Forge,” he says, grinning with pride for his hometown. “I think we’re all good. It will be a little different in every place, but you won’t be disappointed. You won’t find a bad pizza here.”

Competition is practically a dirty word to the town’s pizzaioli. Many of them grew up together and often dine at each other’s restaurants. The Old Forge pizza community is so close-knit that the owners all banded together years ago to develop the “pizza capital” slogan, a flash of marketing brilliance that attracts foodies from around the country—and the world—to this former coal-mining town in the Appalachians.

“There’s no better camaraderie in the world than in Old Forge,” says Jim Mirabelli, who covers the northeast Pennsylvania pizza scene in his popular NEPAPizzaReview.com blog. “All of these pizzeria owners got together and said, ‘Let’s brand this thing’. And they came up with the idea, ‘We’re the pizza capital of the world.’ They all chipped in a few bucks to get the branding going. I’m sure there was a little more to it than that, and maybe a few adult beverages along the way, but [that was] the essence.”

“The cheese blend is the big secret. A lot of it is processed cheese. You’ll see Coopers, cheddars, American, maybe a brick. I’m only speculating, because no one has ever told me what their cheese blend is.”
— Jim Mirabelli, NEPAPizzaReview.com

It doesn’t hurt that Old Forge has a rich pizza history, dating back to at least 1926, when the matriarch of the Ghigiarelli family—owners of a local tavern—reportedly started serving pizzas, baked in rectangular metal pans, to workers who’d drop in to unwind and play cards after a hard day’s work in the coal mines.

As other entrepreneurs got into the act, they borrowed from Grandma Ghigiarelli’s style but added their own signature twists. Today, every Old Forge pizzeria serves a pie that’s similar yet markedly different, Mirabelli says. “Some will get their crust from a local bakery (Agostini’s Bakery), and some make it fresh. Some have more onions in their sauce; some have a chunkier sauce.”

Old Forge pizza is often compared to the Sicilian style, but there are significant differences, Mirabelli notes. “A Sicilian has a larger bubble pattern, but it’s more compressed and spongier in Old Forge pizza,” he says. The Old Forge style features a breadlike crust with a chewy center and a crispy bottom. “A lot of them are crisped up right at the end [of the process],” Mirabelli continues. “They’ll take it off the pan and throw it on the brick, so you get this very slight crispness on the bottom.”

The sauce tends to be a little sweet and a little chunky. “It’s not like the New York-style sauce, where it’s just ground-up plum tomatoes,” Mirabelli says. “It’s more like a spaghetti sauce that’s chunkier and usually sweeter, with that onion flavor. It’s a robust sauce. You taste it immediately.”

A white Old Forge pizza might consist of a top and bottom layer of dough with big, gooey globs of cheese and other fillings in the center. In fact, it’s the cheese that makes each restaurant’s pie special. Every shop uses its own signature cheese blend—and that’s the one thing they’re competitive about. Asked about their preferred mix of cheeses, Old Forge pizza makers will hem and haw a bit before politely refusing to answer.

“The cheese blend is the big secret,” Mirabelli says. “A lot of it is processed cheese. You’ll see Coopers, cheddars, American, maybe a brick. I’m only speculating, because no one has ever told me what their cheese blend is. I don’t think a recipe exists. It’s probably in the owner’s head. Each blend is so unique and brings different flavors. That’s really what makes the pie.”

Old Forge even has its own pizza lexicon. As polite as the townsfolk are, they’ll look at you funny if you order a slice. The right word is “cut.” And a whole pie is called a “tray.” The pizzerias have their own individual quirks, too. At Revello’s, founded in 1967 and owned by Patrick Revello, pies are cut with a giant pizza machete. Elio G’s, meanwhile, is best known, oddly enough, for its shrimp-and-pepper combo of toppings. And at Arcaro & Genell, friends and family members usually enter through the kitchen door in the rear of the store.

Old Forge pizzerias also do booming business far beyond the northeastern Pennsylvania boundaries. Revello’s is one of several that ships its pizzas out overnight to fans around the country. “We’ve been doing it for the past five years,” Revello says. “For Christmas week alone, we shipped out over 150 orders—about three trays per order—in that one week. There is not one state we don’t ship pizza to.”

In other ways, the restaurants are slow to change. Some, like Arcaro & Genell, have little or no social media presence. “We’re trying to fight that,” Genell says, with a chuckle. Elio G’s uses Facebook but doesn’t have a website, nor do some of the better-known Old Forge-style shops in nearby communities, like Lou’s Pizza in Olyphant—whose cuts can be found in gas stations and stores in the area—or Ferri’s Pizza, a Moscow fixture since 1936.

Another thing that will (hopefully) never change: the sense of community among Old Forge’s pizzeria owners. “At one point or another, we all lived above our restaurants,” says Revello, whose restaurant decor includes photos of himself with fellow operators like Genell. “We all grew up going to sleep to [music from] a jukebox, or at a booth, or doing homework at a table.”

Mary Lou Verdetto, who has operated Mary Lou’s in Old Forge since 2001, agrees. “We really don’t compete,” she says. “We’re friends with [each other]. Everyone’s pizzeria is different—different cheeses, different sauces. No, there’s no competition.”